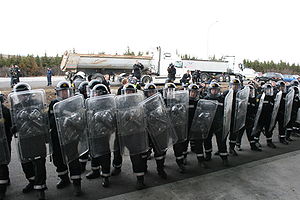 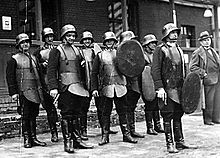 Polish riot police squad in the 1930s, with opaque riot shields and no helmet visors because polycarbonate was not yet invented

For protection, officers performing riot control will often wear protective helmets and carry riot shields. These are designed to protect the wearer from those dangers that come from direct melee and hurled objects such as bottles and bricks. To provide even greater protection, the protective equipment often provides ballistic protection. If tear gas or other riot control agents are to be used, gas masks may also be worn.

One of many additional concerns is to prevent people in the crowd from snatching officers' side arms, which may be stolen or even used against the police. In a very heavy crowd, the officer may not be able to see who is responsible for snatching a weapon, and may not even notice that it has happened. For this reason, riot police may have holsters with positive locking mechanisms or other extra means of retention, if their agencies can afford such tools. However, this can be a trade-off that increases the amount of time needed to draw the sidearm in an emergency. Alternately, riot police may not carry sidearms at all.

The initial choice of tactics determines the type of offensive equipment used. The base choice is between lethal (e.g. 12 gauge shotgun) and non-lethal weaponry (e.g. tear gas, pepper spray, plastic bullets, tasers, batons, and other incapacitants). The decision is based on the perceived level of threat and the existing laws; in many countries it is illegal to use lethal force to control riots in all but the most extreme circumstances.

Special riot hand weapons include the wooden or rubber baton; the African sjambok, a heavy leather or plastic whip, and the Indian lathi, a 6 to 8-foot (2.4 m) long cane with a blunt metal tip. Vehicle-mounted water cannons may serve to augment personal weapons. Some water cannons let police add dye to mark rioters or tear gas to help disperse the crowds.[1]

In major unrest, police in armoured vehicles may be sent in following an initial subduing with firepower. Occasionally, police dogs, fire hoses, or mounted police are deployed.

Riot control agents are non-lethal lachrymatory agents used for riot control. Most commonly used riot control agents are pepper spray and various kinds of tear gas. These chemicals disperse a crowd that could be protesting or rioting, or to clear a building. They can rapidly produce sensory irritation or disabling physical effects which usually disappear within 15 minutes (for tear gas) and up to 2 hours (for pepper spray) following termination of exposure. They can also be used for chemical warfare defense training, although their use in warfare itself is a violation of Article I.5 of the Chemical Weapons Convention. Article II.9 of the CWC specifically authorizes their use for civilian law enforcement.[2]

The active ingredient in pepper spray is capsaicin, which is a chemical derived from the fruit of plants in the Capsicum genus, including chilies. A synthetic analogue of capsaicin, pelargonic acid vanillylamide (desmethyldihydrocapsaicin), is used in another version of pepper spray known as PAVA spray which is used in England. Another synthetic counterpart of pepper spray, pelargonic acid morpholide, was developed and is widely used in Russia. Its effectiveness compared to natural pepper spray is uncertain and it reportedly has caused some injuries. When undesirables threaten an area, such as a riot after a soccer game, riot police are called in to subdue them. In these situations, the police may use pepper spray, or water cannons to neutralize the threat. 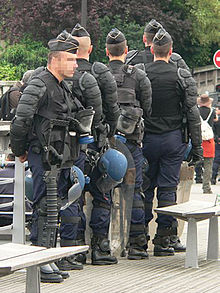 These gendarmes mobiles are ready for riot control; they carry gas masks and one has a grenade launcher for sending tear gas canisters

Pepper spray typically comes in canisters, which are often small enough to be carried or concealed in a pocket or purse. Pepper spray can also be bought concealed in items such as rings. There are also pepper spray projectiles available, which can be fired from a paintball gun. Having been used for years against demonstrators,[3] it is increasingly being used by police in routine interventions.[4]

Tear gas is a non-specific term for any chemical that is used to cause temporary incapacitation through irritation of eyes and/or respiratory system. It is used as a hand-held spray or can be fired in canisters that heat up spewing out an aerosol cloud at a steady rate.[5][6][7]

Popular tear gases include the eye irritants ortho-chlorobenzylidene-malononitrile (CS gas), chloroacetophenone (CN gas), and dibenz (b,f)-1,4-oxazepine (CR gas). Among a long list of substances, these three have become of greater importance than the others because of their effectiveness and low risks when used. Today, CS has largely replaced CN as the most widely used tear gas internationally.[citation needed]

At room temperature, tear gases are white, solid substances. They are stable when heated and have low vapor pressure. Consequently, they are usually dispersed as aerosols. All of them have low solubility in water but can be dissolved in several organic solvents. Hydrolysis of CN is very slow in a water solution, especially if alkali is added. CS is rapidly hydrolyzed in water solution (half-life at pH 7 is about 15 min. at room temperature) and extremely rapid when alkali is added (half-life at pH 9 is about 1 min.). CR is hydrolyzed only to a negligible extent in water solution.

CN and CR are, thus, difficult to decompose under practical conditions, whereas CS can easily be inactivated by means of a water solution. Skin is suitably decontaminated by thorough washing with soap and water. CS is then decomposed, whereas CN and CR are only removed.

Decontamination of material after contamination with CS can be done with a 5–10 percent soda solution or 2 percent alkaline solution. If this type of decontamination cannot be accomplished (e.g., contaminated rooms and furniture), then the only other means is by intensive air exchange—preferably with hot air. Exposed streets and sidewalks will have toxic[citation needed] and irritating CS powder that will be stirred into the air by traffic and pedestrians long after the cloud has dissipated, and should be washed away with water. In contrast to human beings, domesticated animals generally have lower sensitivity to tear gases. Dogs and horses can therefore be used by police for riot control even when tear gas is used.[citation needed]

Backpack dispensers for riot control agents, when the intent is to use a larger quantity than possible with grenades, are one type of device used by organizations that might, for example, need to cover a prison yard [8] Dispensers are also made for attachment to helicopters; see CBU-19.[9]

Mounted riot police as crowd control during protests in Edinburgh

The front-line officers in a riot control are often fully armored and carry weapons such as batons, designed to be in direct contact with the crowd. These officers subdue rioters and subsequently allow the less heavily armoured, more mobile officers to make arrests where it is deemed necessary. In face of a greater threat, the riot police will be backed up with other officers equipped with riot guns to fire tear gas, rubber bullets, plastic bullets or "beanbag" rounds.

As a less aggressive step, mounted police may first be sent into the crowd. The might and height offered by the horse are combined with its training, allowing an officer to more safely infiltrate a crowd. Usually, when front-facing a riot, officers slowly walk in a line parallel to the riot's front, extending to both its ends, as they noisily and simultaneously march and beat their shields with their batons, to cause fear and psychological effects on the crowd.

German police deploy an armoured riot control vehicle at a demonstration in Hamburg.

The French CRS's tactics against a long demonstration march is to attack it at several points and chop it into segments, rather than to merely try to block it at its front end. Since the advent of artillery, straight roads have been of notable importance in city defense and control. Upon coming to power, Napoleon III built great avenues, referred to as anti-riot streets, into the troublesome quarters of Paris.[10] The wide straight roads also allowed for cavalry charges to subdue rioters.

In the United Kingdom, usually when large demonstrations take place that are deemed unstable, the territorial police force responsible for the demonstration in that area will usually deploy Police Support Unit personnel who are trained in riot tactics, along with normal divisional officers. If the demonstration turns violent, police will seal roads and other exits to contain protesters in a single area (known as kettling) to prevent widespread damage and wait until the protesters tire. These tactics were seen during the 2009 G-20 London summit protests and the 2010 student protests in London. Tear gas and other more offensive tactics are used as a last resort. Throughout police will be videoing or photographing protesters for future arrests, "snatch squad" tactics might also be used.

Research into weapons that are more effective for riot control continues. Netguns are non-lethal weapons designed to fire a net which entangles the target. Netguns have a long history of being used to capture wildlife, without injury, for research purposes. A netgun is currently in development for non-lethal riot control. Pepper-spray projectiles are a projectile weapons that launch a fragile ball which breaks upon impact and releases an irritant powder called PAVA (capsaicin II) pepper. The launchers are often slightly modified .68 caliber paintball guns.

Stink bombs are devices designed to create an extremely unpleasant smell for riot control and area denial purposes. Stink bombs are believed to be less dangerous than other riot control chemicals, since they are effective at low concentrations. Sticky foam weapons are being tested, which cover and immobilize rioters with a gooey foam.[11]

Low frequency sound cannons are weapons of various types that use sound to injure or incapacitate subjects using a focused beam of sound or ultrasound. Active denial systems (ADS) are a non-lethal, directed-energy weapon developed by the U.S. military. The ADS directs electromagnetic radiation, specifically, high-frequency microwave radiation, at a frequency of 95 GHz, which causes the water in the upper epidermis to boil, stimulating a "burning" sensation in the nerve endings and generating intense pain. Dazzler lasers are directed-energy weapons that use intense light to cause temporary blindness or disorientation of rioters.