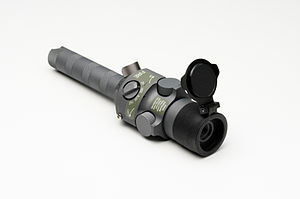 A dazzler is a directed-energy weapon intended to temporarily blind or disorient its target with intense directed radiation. Targets can include sensors or human vision. Dazzlers emit infrared or visible light against various electronic sensors, and visible light against humans, when they are intended to cause no long-term damage to eyes. The emitters are usually lasers, making what is termed a laser dazzler. Most of the contemporary systems are man-portable, and operate in either the red (a laser diode) or green (a diode-pumped solid-state laser, DPSS) areas of the electromagnetic spectrum.

Initially developed for military use, non-military products are becoming available for use in law enforcement and security.[1][2]

Weapons designed to cause permanent blindness are banned by the 1995 United Nations Protocol on Blinding Laser Weapons. The dazzler is a non-lethal weapon intended to cause temporary blindness or disorientation and therefore falls outside this protocol.

Some searchlights are bright enough to cause permanent or temporary blindness, and they were used to dazzle the crews of bombers during World War II. Whirling Spray was a system of search lights fitted with rotating mirrors which was used to dazzle and confuse pilots attacking the Suez canal.[3] This was developed into the Canal Defence Light, a small mobile tank mounted system intended for use in the Rhine crossings. However, the system was mainly used as conventional searchlights.

Handgun or rifle-mounted lights may also be used to temporarily blind an opponent and are sometimes marketed for that purpose. In both cases the primary purpose is to illuminate the target and their use to disorient is secondary.

First use in Falklands

The first reported use of laser dazzlers in combat was possibly by the British, during the Falklands War of 1982, when they were reputedly fitted to various Royal Navy warships to hinder low-level Argentinian air attacks.[4][5]

Use by United States forces in Iraq

At the end of Operation Desert Storm, F-15E crews observing the Iraqi military's massacre of Kurdish civilians at Chamchamal were forbidden from firing on the attackers, but instead used their lasers as a dazzler weapon. This ultimately proved ineffective in crashing any attack helicopters.[6]

On 18 May 2006, the U.S. military announced it would issue dazzling lasers designed to be attached to M-4 rifles to troops in Iraq. This weapon is intended to provide a non-lethal way to stop drivers who fail to stop at checkpoints manned by American soldiers.[citation needed] 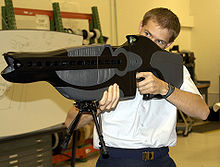 One defense against laser dazzlers are narrowband optical filters tuned to the frequency of the laser. To counter such defense, dazzlers can employ emitters using more than one wavelength, or tunable lasers with wider range of output. Another defense is photochromic materials able to become opaque under high light energy densities. Non-linear optics techniques are being investigated: e.g. vanadium-doped zinc telluride (ZnTe:V) can be used to form electro-optic power limiters able to selectively block the intense dazzler beam without affecting weaker light from an observed scene.