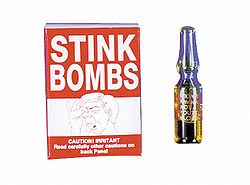 A stink bomb or stinkbomb is a device designed to create an unpleasant smell. They range in effectiveness from simple pranks to military grade or riot control chemical agents.

The Guinness Book of Records lists two smelliest substances. One is "US Government Standard Bathroom Malodor"; a mixture of eight chemicals with a stench resembling human feces, only much stronger, designed to test the efficacy of deodorizers and air fresheners. Another one, "Who me?", is a mixture of five sulfur-containing chemicals and smells like rotting food and carcasses.[1]

At one end of the spectrum, relatively harmless stink bombs consist of ammonium sulfide, which smells strongly of rotten eggs. When exposed to air, the ammonium sulfide reacts with moisture, hydrolyzes, and a mixture of hydrogen sulfide and ammonia is released. Other popular substances on which to base stink bombs are thiols with lower molecular weight, e.g., methyl mercaptan and ethyl mercaptan—the chemicals that give odor to skunks and are added in minute quantities to natural gas in order to make gas leaks detectable by smell. A variation on this idea is the scent bomb, or perfume bomb, filled with an overpowering "cheap perfume" smell.

At the other end of the spectrum, the governments of Israel and the United States of America are developing stink bombs for use by their law enforcement agencies and militaries as riot control and area denial weapons. Using stink bombs for these purposes have advantages over traditional riot control agents: unlike pepper spray and tear gas, stink bombs are believed not to be dangerous, and they are effective at low concentrations.

Prank stink bombs and perfume bombs are usually sold as a 1- or 2-ml sealed glass ampoule, which can be broken by throwing against a hard surface or by crushing under one's shoe sole, thus releasing the odorous liquid contained therein. Another variety of prank stink bomb comprises two bags, one smaller and inside the other. The inner one contains a liquid and the outer one a powder. When the inner one is popped by squeezing it, the liquid reacts with the powder, producing hydrogen sulfide, which expands and pops the outer bag, releasing an unpleasant odor.

Typically, lower molecular weight volatile organic compounds are used. Generally the higher molecular weight for a given class of compounds, the lower volatility and initial concentration but the longer persistence. Some chemicals (typically thiols) have a certain concentration threshold over which the smell is not perceived significantly stronger; therefore a lower-volatility compound is capable of providing comparable stench intensity to a higher-volatility compound, but for longer time. Another issue is the operating temperature, on which the compound's volatility strongly depends. Care should be taken as some compounds are toxic either in higher concentration or after prolonged exposure in low concentration.

Some plants may be used as improvised stink bombs, One such plant is the Parkia speciosa or 'stinky bean', which grows in India, Southeast Asia and Eastern Australia. The pods from this plant are collected when partly dried and stamped on, to release the stink.[citation needed]

The most often encountered compounds are:

The US Government Standard Bathroom Malodor is quoted to have this composition:[2]