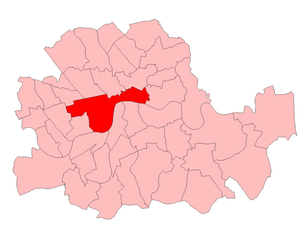 Cities of London and Westminster in the Parliamentary County of London, showing boundaries used from 1950 to 1974

In the London Assembly, the area of the seat in the City of London is covered by the City and East constituency, and the area in Westminster by the West Central constituency.

The Boundary Commission for England has formed two constituencies without pairing with another London Borough following their review of parliamentary representation in North London. The Bayswater area was removed from this constituency and paired with those portions of Regent's Park and Kensington North which were within the City of Westminster to reform the Westminster North seat which existed prior to 1997. The remainder of the constituency is Cities of London and Westminster, which was also the case prior to 1997.

The electoral wards used in the creation of the modified Cities of London and Westminster constituency are:

The constituency covers much of the commercial, historical and touristic heart of London, including the Square Mile, St. Paul's Cathedral, Houses of Parliament, Westminster Abbey, Trafalgar Square, Buckingham Palace and Hyde Park.

Few people actually live in the City of London's financial district and in the West End. Mayfair, Belgravia and Knightsbridge rank among Europe's wealthiest residential districts but around half the electorate are in the more socially mixed areas of Bayswater and Pimlico, or the former council estates of Westminster proper.

At the 1997 general election, a Labour landslide, the constituency returned a Conservative MP by a majority of four thousand, making it a safe Conservative seat.

This seat has been represented by Mark Field since the 2001 general election.