Croydon South is a parliamentary constituency represented in the House of Commons of the Parliament of the United Kingdom. It elects one Member of Parliament (MP) by the first past the post system of election. The current MP is Conservative Richard Ottaway, who in 1992 replaced Sir William Clark, who had held the seat from its creation in 1974.

By far the safest of the three Croydon seats, Croydon South is one of the safest Conservative seats in Greater London, consisting almost entirely of highly affluent suburban areas with well-to-do businesspeople taking advantage of the fast commuter rail connections to the City and Gatwick airport, plus a significant proportion of retirees.

The village-like Selsdon - one of the few places in the seat where transport links are actually poor - has a place on the political map having spawned the phrase 'Selsdon Man', while Purley has become home to large retail estates for out-of-town shopping and leisure.

At the southern end of the seat, Coulsdon has much in common with the county of Surrey of which it was historically a part.

Until 1974, most of the area was in the East Surrey constituency, with a constituency also called Croydon South covering the completely distinct area now occupied by Croydon Central constituency. 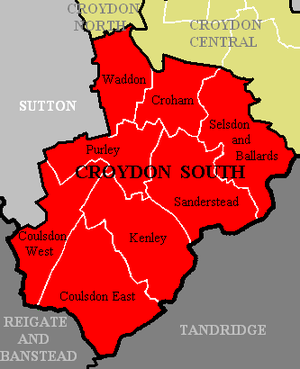 The new wards of the Croydon South Constituency

Croydon South covers the south west of the London Borough of Croydon. It is made up of eight electoral wards from the borough:

Following their review of parliamentary representation in South London, the Boundary Commission for England made minor changes to the constituency. Parts of Croham ward, Selsdon and Ballards ward, and Waddon ward were transferred to Croydon South from Croydon Central constituency.