Mayfair (originally called The May Fair) is an area of central London, within the City of Westminster.

The north side of Grosvenor Square in the 18th or early 19th century. The three houses at the far left form a unified group, but the others on this side are individually designed. Most later London squares would be more uniform.

Mayfair is named after the annual fortnight-long May Fair that took place on the site that is Shepherd Market today (from 1686 until it was banned in that location in 1764). Until 1686, the May Fair was held in Haymarket, and after 1764, it moved to Fair Field in Bow because the well-to-do residents of the area felt the fair lowered the tone of the neighbourhood.[1]

Mayfair was traditionally bordered by Hyde Park to the west, Oxford Street to the north, Piccadilly to the south and Bond Street to the east, although the eastern boundary has been stretched in recent years to Regent Street. The old telephone district of MAYfair (later 629) changed east of Bond Street to REGent (later 734). Most of the area was first developed between the mid 17th century and the mid 18th century as a fashionable residential district, by a number of landlords, the most important of them being the Dukes of Westminster, the Grosvenor family. The Rothschild family bought up large areas of Mayfair in the 19th century. The freehold of a large section of Mayfair also belongs to the Crown Estate.

The district is now mainly commercial, with many offices in converted houses and new buildings, including major corporate headquarters, a concentration of hedge funds, real estate businesses and many different embassy offices, namely the U.S.'s large office taking up all the west side of Grosvenor Square.[2] Rents are among the highest in London and the world. There remains a substantial quantity of residential property as well as some exclusive shopping and London's largest concentration of luxury hotels and many restaurants. Buildings in Mayfair include both the Canadian High Commission and the United States embassy in Grosvenor Square, the Royal Academy of Arts, The Handel House Museum, the Grosvenor House Hotel, Claridge's and The Dorchester.

The renown and prestige of Mayfair could have grown in the popular mind because it is the most expensive property on the British Monopoly set.

Mayfair has become an attractive location away from the City of London for private banks, hedge funds and wealth managers.[citation needed] The Egyptian Education Bureau, is located in Chesterfield Gardens.[3] EasyGroup has its head office in Mayfair.[4]

Cadbury formerly had its head office in Mayfair. In 2007, Cadbury Schweppes announced that it was moving to Uxbridge, London Borough of Hillingdon, to cut costs.[5]

Mayfair also boasts some of the capital's most exclusive shops, hotels, restaurants and clubs. Just alongside Burlington House is one of London's most luxurious shopping areas, the Burlington Arcade, which has housed shops under its glass-roofed promenade since 1819.[6]

For education in Mayfair, see List of schools in the City of Westminster.

The City of Westminster operates the Mayfair Library as a local library.[7]

St. Nicholas College of London (16 Curzon Street W1J 5HP) offers lessons in English and other languages to the residents and visitors of Mayfair. www.stncollege.co.uk 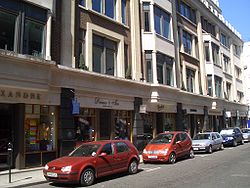 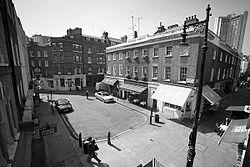 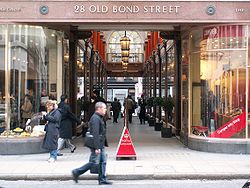