/ˈhoʊbərn/ hoh-bərn)[a] is an area of Central London. Holborn is also the name of the area's principal east-west street, running as High Holborn from St Giles's High Street to Gray's Inn Road (the junction being roughly where Holborn Bar — the entrance to the City of London — was) and then on to Holborn Viaduct. The street since boundary changes in 1994 runs along the boundary between the London Borough of Camden and the City of London; previously the boundary was less obvious in the area and crossed the street at Holborn Bar.

The area's first mention is in a charter of Westminster Abbey, by King Edgar, dated to 959. This mentions "the old wooden church of St Andrew" (St Andrew, Holborn).[1] The name Holborn may be derived from the Middle English "hol" for hollow, and bourne, a brook, referring to the River Fleet as it ran through a steep valley to the east.[1][2] Historical cartographer William Shepherd in his Plan of London about 1300 labels the Fleet as "Hole Bourn" where it passes to the east of St Andrew's church.[3] However, the 16th century historian John Stow attributes the name to the Old Bourne ("old brook"), a small stream which he believed ran into the Fleet at Holborn Bridge, a structure lost when the river was culverted in 1732. The exact course of the stream is uncertain, but according to Stow it started in one of the many small springs near Holborn Bar, the old City toll gate on the summit of Holborn Hill.[2][4] Other historians, however, find the theory implausible, in view of the slope of the land.[5]

It was then outside the City's jurisdiction and a part of Ossulstone Hundred in Middlesex. In the 12th century St Andrew's was noted in local title deeds as lying on "Holburnestrate"—Holborn Street.[6] The original Bars were the boundary of the City of London from 1223, when the City's jurisdiction was extended beyond the Walls, at Newgate, into the suburb here, as far as the point where the Bars where erected, until 1994 when the border moved to the junction of Chancery Lane. In 1394 the Ward of Farringdon Without was created, but only the south side of Holborn was under its jurisdiction with some minor properties, such as parts of Furnival's Inn, on the northern side, "above Bars". The rest of the area "below Bars" (outside the City's jurisdiction) was organised by the vestry board of the parish of St Andrew.[7] 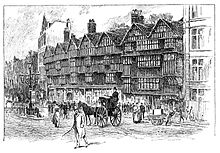 In the 18th century, Holborn was the location of the infamous Mother Clap's molly house but in the modern era High Holborn has become a centre for entertainment venues to suit more general tastes: 22 inns or taverns were recorded in the 1860s and the Holborn Empire, originally Weston's Music Hall, stood between 1857 and 1960, when it was pulled down after structural damage sustained in the Blitz. The theatre premièred the first full-length feature film in 1914, The World, the Flesh and the Devil, a 50-minute melodrama filmed in Kinemacolour.[8]

Charles Dickens took up residence in Furnival's Inn, on the site of the former Prudential building designed by Alfred Waterhouse now named "Holborn Bars". Dickens put his character "Pip", in Great Expectations, in residence at Barnard's Inn opposite, now occupied by Gresham College.[9] Staple Inn, notable as the promotional image for Old Holborn tobacco,[10] is nearby. The three of these were Inns of Chancery. The most northerly of the Inns of Court, Gray's Inn, is in Holborn, as is Lincoln's Inn: the area has been associated with the legal professions since mediaeval times. Subsequently the area diversified and become recognisable as the modern street. A plaque stands at number 120 commemorating Thomas Earnshaw's invention of the Marine chronometer, which facilitated long-distance travel. At the corner of Hatton Garden was the old family department store of Gamages. Until 1992, the London Weather Centre was located in the street. The Prudential insurance company relocated in 2002. The Daily Mirror offices used to be directly opposite it, but the site is now occupied by the J Sainsbury head office.

Further east, in the gated avenue of Ely Place, is St Etheldreda's Church, originally the chapel of the Bishop of Ely’s London palace. This ecclesiastical connection allowed the street to remain part of the county of Cambridgeshire until the mid 1930s. This meant that the Mitre Tavern, located in a court hidden behind the buildings of the Place and the Garden was subject to the Cambridgeshire Magistrates to grant its licence.[11][12] St Etheldreda's is the oldest church building used for Roman Catholic worship in London, but this became so only after it ceased to be an Anglican chapel in the 19th century.

Hatton Garden, the centre of the diamond trade, was leased to a favourite of Queen Elizabeth I, Sir Christopher Hatton at the insistence of the Queen to provide him with an income. Behind the Prudential Building lies the Anglo-Catholic church of St Alban the Martyr.[13] Originally built in 1863 by architect William Butterfield it was destroyed in 1941 and a new church was built in the Victorian Gothic style. The current vicar is the Venerable Howard Levett.[14] On the southern side lie Chancery Lane and Fetter Lane.

On Holborn Circus lies the Church of St Andrew, an ancient Guild Church that survived the Great Fire of London. However the parochial authority decided to commission Sir Christopher Wren to rebuild it. Although the nave was destroyed in the Blitz, the reconstruction was faithful to Wren's original. In the middle of the Circus there is a large equestrian statue of Prince Albert by Charles Bacon (1874), the City's official monument to him. It was presented by Charles Oppenheim, of the Diamond Trading Company De Beers, whose headquarters building is in nearby Charterhouse Street. 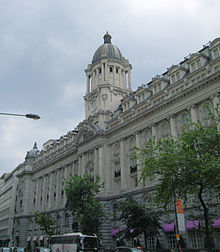 In the early 21st century, Holborn has become the site of new offices and hotels: for example, the old neoclassical Pearl Assurance building near the junction with Kingsway was converted into an hotel in 1999.

For education within the Westminster portion of Holborn see the main City of Westminster article.

The following is a list of notable people who were born in Holborn or are significantly connected with Holborn.