The Daily Mirror is a British national daily tabloid newspaper which was founded in 1903. Twice in its history, from 1985 to 1987, and from 1997 to 2002, the title on its masthead was changed to read simply The Mirror, which is how the paper is often referred to in popular parlance. It had an average daily circulation of 1,185,729 in July 2011.[1] Its Sunday sister paper is the Sunday Mirror. 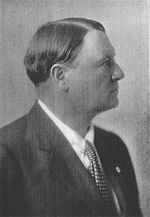 The Daily Mirror was launched on 2 November 1903 by Alfred Harmsworth (later Lord Northcliffe) as a newspaper for women, run by women. Hence the name: he said, "I intend it to be really a mirror of feminine life as well on its grave as on its lighter sides....to be entertaining without being frivolous, and serious without being dull".[2] It cost one penny.

It was not an immediate success and in 1904 Harmsworth decided to turn it into a pictorial newspaper with a broader focus. Harmsworth appointed Hamilton Fyfe as editor and all of the paper's women journalists were fired. The masthead was changed to The Daily Illustrated Mirror, which ran from 26 January to 27 April 1904 (issues 72 to 150), when it reverted to The Daily Mirror.[3] The first issue of the relaunched paper did not have advertisements on the front page as previously, but instead news text and engraved pictures (of a traitor and an actress), with the promise of photographs inside.[4] Two days later, the price was dropped to one halfpenny and to the masthead was added: "A paper for men and women".[5] This combination was more successful: by issue 92, the guaranteed circulation was 120,000 copies[6] and by issue 269, it had grown to 200,000:[7] by then the name had reverted and the front page was mainly photographs. Circulation grew to 466,000 making it the second largest morning newspaper.[8]

Alfred Harmsworth sold the newspaper to his brother Harold Harmsworth (from 1914 Lord Rothermere) in 1913. In 1917, the price was increased to one penny.[9] Circulation continued to grow: in 1919, some issues sold more than 1 million copies a day, making it the largest daily picture paper.[10] 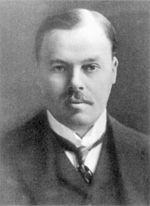 By the mid 1930s, the Mirror was struggling – it and the Mail were the main casualties of the early 1930s circulation war that saw the Daily Herald and the Daily Express establish circulations of more than two million, and Rothermere decided to sell his shares in it.

With Cecil King (Rothermere's nephew) in charge of the paper's finances and Guy Bartholomew as editor, during the late-1930s the Mirror was transformed from a conservative, middle class newspaper into a left-wing paper for the working class. The Mirror was the first UK paper to adopt the appearance of the New York tabloids. By 1939, the publication was selling 1.4 million copies a day. In 1937, Hugh McClelland introduced his wild Western comic strip Beelzebub Jones in the Daily Mirror. After taking over as cartoon chief at the Mirror in 1945, he dropped Beelzebub Jones and moved on to a variety of new strips.

During World War II, the Mirror positioned itself as the paper of the ordinary soldier and civilian, and was critical of the political leadership and the established parties. At one stage, the paper was threatened with closure following the publication of a Philip Zec cartoon (captioned by William Connor), which was misinterpreted by Winston Churchill and Herbert Morrison.[11] In the 1945 general election the paper strongly supported the Labour Party in its eventual landslide victory. In doing so, the paper supported Herbert Morrison, who co-ordinated Labour's campaign, and recruited his former antagonist Philip Zec to reproduce, on the front page, a popular VE Day cartoon on the morning of the election, suggesting that Labour were the only party who could maintain peace in post-war Britain.[12] By the late 1940s, it was selling 4.5 million copies a day, outstripping the Express; for some 30 years afterwards, it dominated the British daily newspaper market, selling over 5 million copies a day at its peak in the mid-1960s.

In 1955, the Mirror and its stablemate the Sunday Pictorial (later to become the Sunday Mirror) began printing a Northern edition in Manchester. In 1957, it introduced the Andy Capp cartoon, created by Reg Smythe from Hartlepool, in the northern editions.

The Mirror's mass working class readership had made it the United Kingdom's best-selling daily tabloid newspaper. In 1960, it acquired the Daily Herald (the popular daily of the labour movement) when it bought Odhams, in one of a series of takeovers which created the International Publishing Corporation (IPC). The Mirror management did not want the Herald competing with the Mirror for readers, and in 1964, relaunched it as a mid-market paper, now named The Sun. When it failed to win readers, the Sun was sold to Rupert Murdoch – who immediately relaunched it as a more populist and sensationalist tabloid and a direct competitor to the Mirror.

In an attempt to cater to a different kind of reader, the Mirror launched the "Mirrorscope" pull-out section on 30 January 1968. The Press Gazette commented: "The Daily Mirror launched its revolutionary four-page supplement "Mirrorscope". The ambitious brief for the supplement, which ran on Wednesdays and Thursdays, was to deal with international affairs, politics, industry, science, the arts and business".[13] The British Journalism Review said in 2002 that "Mirrorscope" was "a game attempt to provide serious analysis in the rough and tumble of the tabloids".[14] It failed to attract significant numbers of new readers, and the pull-out section was abandoned, its final issue appearing on 27 August 1974.

In 1978, The Sun overtook the Mirror in circulation, and in 1984 the Mirror was sold to Robert Maxwell. After Maxwell's death in 1991, David Montgomery became Mirror Group's CEO, and a period of cost-cutting and production changes ensued. The Mirror went through a protracted period of crisis before merging with the regional newspaper group Trinity to form Trinity Mirror in 1999. Printing of The Daily and Sunday Mirror moved to Trinity Mirror's facilities in Watford and Oldham. 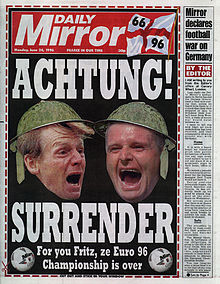 Front page of the Mirror 24 June 1996, with headline "ACHTUNG! SURRENDER For you Fritz, ze Euro 96 Championship is over", and accompanying contribution from the Editor "Mirror declares football war on Germany"

Under the editorship of Piers Morgan (from October 1995 to May 2004) the paper saw a number of controversies. Morgan was widely criticised and forced to apologise for the headline "ACHTUNG! SURRENDER For you Fritz, ze Euro 96 Championship is over" a day before England met Germany in a semi-final of the Euro '96 football championships.[15]

In 2000, Morgan was the subject of an investigation after Suzy Jagger wrote a story in The Daily Telegraph revealing that he had bought £20,000 worth of shares in the computer company Viglen soon before the Mirror 's 'City Slickers' column tipped Viglen as a good buy.[16] Morgan was found by the Press Complaints Commission to have breached the Code of Conduct on financial journalism, but kept his job. The 'City Slickers' columnists, Anil Bhoyrul and James Hipwell, were both found to have committed further breaches of the Code, and were sacked before the inquiry. In 2004, further enquiry by the Department of Trade and Industry cleared Morgan from any charges.[17] On 7 December 2005 Bhoyrul and Hipwell were convicted of conspiracy to breach the Financial Services Act. During the trial it emerged that Morgan had bought £67,000 worth of Viglen shares, emptying his bank account and investing under his wife's name too.[18]

In 2002, the Mirror attempted to move mid-market, claiming to eschew the more trivial stories of show-business and gossip. The paper changed its masthead logo from red to black (and occasionally blue), in an attempt to dissociate itself from the term "red top", a term for a sensationalist mass-market tabloid. (On 6 April 2005, the red top came back.) Under then-editor Piers Morgan, the newspaper's editorial stance opposed the 2003 invasion of Iraq, and ran many front pages critical of the war. It also gave financial support to the 15 February 2003 anti-war protest, paying for a large screen and providing thousands of placards. Morgan rehired John Pilger, who had been sacked during Robert Maxwell's ownership of the Mirror titles. Despite such changes, Morgan was unable to halt the paper's decline in circulation, a decline shared by its direct tabloid rivals The Sun and the Daily Star.[citation needed]

Morgan was fired from the Mirror on 14 May 2004 after authorising the newspaper's publication of photographs allegedly showing Iraqi prisoners being abused by British Army soldiers from the Queen's Lancashire Regiment.[19] Within days the photographs were shown to be crude fakes. Under the headline "SORRY.. WE WERE HOAXED", the Mirror responded that it had fallen victim to a "calculated and malicious hoax" and apologised for the publication of the photographs.[20]

The Mirror's front page on 4 November 2004, after the re-election of George W. Bush as U.S. President, read "How can 59,054,087 people be so DUMB?". It provided a list of states and their average IQ, showing the Bush states all below average intelligence (except for Virginia), and all Kerry states at or above average intelligence. The source for this table was The Economist,[21] though it was a hoax.[22] Richard Wallace became editor in 2004.

Front page of the Daily Mirror after publishing faked photographs.