More4 is a digital television channel, run by British broadcaster Channel 4, that launched on 10 October 2005. It is carried on Freeview, on satellite broadcasters Freesat and Sky, UK IPTV broadcaster TalkTalk TV and on UK cable network Virgin Media and in the Republic of Ireland cable networks including UPC.

More4 centres around lifestyle, documentary, and arts programming, and competes with the BBC's similar offering, BBC Four. More4 airs from 9:00 am until about 3:00 am. The channel's annual budget is £33 million, of which £20 million is earmarked for original programming. Peter Dale, Channel 4's current head of documentary events and the new channel's chief said it would be "television that restarts the conversation". 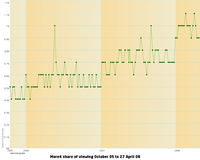 To encourage new viewers to try the new service, Channel 4 moved its first-run showing of The West Wing, showing season 6 and 7 back to back, from its sister digital station E4 to More4 and Without a Trace from Channel 4. The channel also carries (or has carried) other American imports such as The Daily Show, Curb Your Enthusiasm, and repeats of Channel 4 programmes including game show Deal or No Deal, reality TV show Brat Camp, investigative series Dispatches, and the controversial BodyShock. Daytime content includes classic films and reruns of shows such as Hill Street Blues and ER.

On midweek days, it shows hour long and feature length documentaries including Channel 4's Cutting Edge films. On its first night, the channel led with the satirical docudrama A Very Social Secretary about the affair between David Blunkett, the former British Home Secretary, and Kimberly Quinn.

Having shown all five weekday editions of The Daily Show since More4's launch, in January 2011 the channel scaled back its commitment to one episode a week in order to increase investment in its arts programming.[1]

In September 2005, Channel 4 began running teaser trailers for the new station (although the name was neither mentioned nor seen in the adverts). Showing neon lettering, the teasers hinted at "adult entertainment". Some people may have been confused by the deliberate double-meaning of these trailers and mistakenly presumed the new channel would be of a pornographic nature. The Daily Mail refused to accept launch advertising for the channel on these grounds.

Advertisements starting at the end of September made it much clearer that the "adult entertainment" being offered was the 'intelligent and insightful' programming.

Space was reserved on Freeview multiplex C for the channel. However, despite Channel 4 saying that the channel would appear on multiplex C, the channel has appeared on multiplex 2. A place holder appeared on the Freeview EPG at number 13 on 13 September and after a time, ran a looping teaser trailer. More4+1 became available on the DTT platform on 14 December 2005. It was removed on 18 May 2006, to make way for live coverage of Big Brother, and the Freeview launch of Film4 later in the year.

While More4 is available on most cable platforms, More4 +1 was available on Virgin Media until 20 August 2007 when it was replaced by Channel 4 +1 across the digital television network.

Despite initial advertising and official internet communication that it would be free-to-air on satellite television, More4 was encrypted under Sky's pay TV scheme until May 6, 2008 when it dropped its NDS encryption and went free-to-air. It joined the BBC and ITV's new satellite platform, Freesat on the same day.

More4 is available to viewers in the Republic of Ireland via Sky, Freesat and UPC Ireland's digital service. This led to further speculation that Channel 4 would eventually launch on Sky in the Republic of Ireland, which it did in December 2006. C4 has already made its other flagship channels: E4, E4+1, Film4 and Film4+1 available in Ireland via Sky, UPC Ireland digital TV providers. Channel 4 itself is available on almost all Irish cable and MMDS systems (in some cases Channel 4 is replaced with S4C).