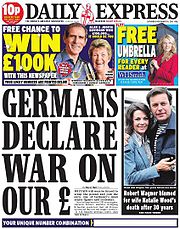 Front page of the Daily Express, one of Northern & Shell's publications.

Desmond founded Northern and Shell in 1974 and launched a magazine called International Musician and Recording World. In 1983, Northern and Shell obtained the license to publish Penthouse in the United Kingdom which led to its publishing a range of adult titles,[2] Asian Babes among them.[3][4] These titles were later sold in 2004. It was the first company to move to the revamped Docklands and the Princess Royal opened the offices. When the company moved to the Northern & Shell Tower Prince Philip did the honours.

In November 2000 Northern & Shell acquired Express Newspapers from United News & Media for £125m,[5] enlarging the group to include the Daily and Sunday Express titles, the Daily Star and Daily Star Sunday (which Desmond started), and the Irish Star (owned jointly with the Irish Independent group). The Daily and Sunday Express each sell around 700,000 copies per issue.[6]

Northern & Shell also publishes a wide range of magazines including the celebrity weekly, OK!, started as a monthly in 1993, which is the largest weekly magazine in the world with a readership in excess of 31 million[citation needed].