The Mail on Sunday

The Mail on Sunday is a British conservative newspaper, currently published in a tabloid format. First published in 1982 by Lord Rothermere, it became Britain's biggest-selling Sunday newspaper following the closing of The News of the World in July 2011.[2] Its sister paper, the Daily Mail was launched in 1896.

It is owned by Associated Newspapers, but the editorial staff are entirely separate from the Daily Mail. It had an average daily circulation of 1,979,701 in September 2011.[1] In July, 2011, with the closure of the News of the World the Mail on Sunday sold some 2.5 million copies a week but by September that had fallen back to just under 2 million.

The Mail on Sunday was launched on 2 May 1982, to complement the Daily Mail. The first story on the front page was the RAF's bombing of Port Stanley airport in the Falklands. The Daily Mail and General Trust (DMGT) had come up with some tough targets for the paper to produce. Initially DMGT wanted to sell a target of a circulation of 1.25 million. But the launch of The Mail on Sunday was not a success, as by the sixth week sales were just peaking at 700,000. The newspaper's sports coverage was seen to be among its weaknesses at the time of its launch. The Mail on Sunday's first back-page splash was a report from Holland on the rollerskating world championships, which led to the paper being ridiculed in the industry.

Lord Rothermere, then the proprietor, brought in the Daily Mail's editor David English, later Sir David who, with a task force of new journalists, redesigned and re-launched The Mail on Sunday. Over a period of three and a half months, Sir David managed to halt the decline and circulation increased to 840,000. There were three new sections introduced, first was a sponsored partwork the initial one to be a cookery book; then a colour comic supplement (an innovation in the British Sunday newspaper market); and lastly, a magazine – You magazine. Circulation for the paper is now around 2.3 million, an increase of more than 1.5 million.

The newspaper's reputation was built on the back of its next editor, Stewart Steven. The newspaper's circulation grew from around 1m to just under 2m during his time in charge. Although its sister paper the Daily Mail has invariably supported the Conservative party, Steven backed David Owen's Social Democratic Party in the 1983 General Election.[3] The subsequent editors were Jonathan Holborow, and the incumbent, Peter Wright. 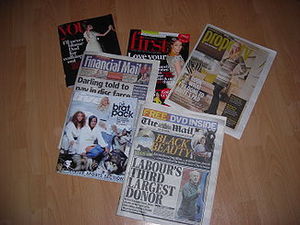 An issue of The Mail on Sunday from 2007-11-25 with all its supplements. Note that the First magazine was included as a preview before it was released on general sale.