As the capital of Wales, media in Cardiff plays a large role in the city and nationwide. Cardiff is the largest media sector in the United Kingdom outside of London and it is produced mainly in English and Welsh.[1] Employment in the sector has grown significantly in recent years, and currently provides employment for 2.1% of the city's workforce - higher than the level across Wales (1.1%) and marginally lower than that across Great Britain as a whole (2.2%).[1] 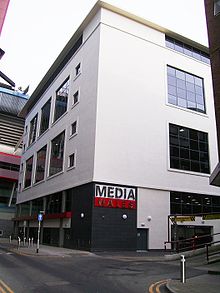 Cardiff's daily tabloid newspaper is the South Wales Echo, founded in 1884 and formerly based in Thomson House, now in 6 Park Street in the city centre. There are two daily editions - News Extra in the morning and City Final edition. The Weekend Edition is published on Saturday. Roughly 50,000 copies are sold daily.[2] The national newspapers, the Western Mail and Wales on Sunday, are also based in Thomson House as all are owned by Trinity Mirror. The Western Mail has a daily circulation of about 40,000.[3]

The Cardiff edition of Metro is available daily on public transport in the city and around South Wales.[4] Both the South Wales Echo and Metro publish daily information for the city such as the weather and entertainment listings.

The Times Educational Supplement Cymru is based in the city, but the paper itself is printed in England.

Cardiff County Council publishes the monthly Capital Times, and the Echo Extra is delivered free to homes. The Welsh language newspaper Y Dinesydd (or Papur Bro) is published monthly for the city. Additionally, all British daily newspapers are widely available in the city.[6][7]

Magazines based in the capital include Jazz UK, Buzz magazine and Primary Times

Between 2002 and 2009 Capital TV served the city, a locally-based free-to-air analogue terrestrial television station operating on a Restricted Service Licence.[8][9] It broadcast 24 hours a day, 7 days a week, on UHF channel 49. The signal has been independently verified to reach approximately 220,000 viewers across the city. It broadcast local news, local features and documentaries, movies, local band performances, productions made by local media colleges and programming made by young people under educational training at Media4Group - the majority shareholder.[10]

Capital TV Cardiff was initially developed by the Cardiff-based production company Merlin Broadcast Ltd and won the contest for the Cardiff licence in 1998. It was allocated the lowest transmitter power and the lowest antenna height of any local station in the UK. Worse still, because of frequency clashes with an ITV relay mast, Capital TV was not allowed to broadcast a full service until 2005 - by which time digital terrestrial television had become commonplace. Unlike the BBC, ITV and S4C; Capital TV received no public funding. The company decided to relinquish its analogue Local TV broadcasting licence in 2009 as this was due to expire in October that year as part of the switchover to digital.

The city also has its own Ofcom-licensed local digital television spectrum, owned by Cube Interactive.[11]

Cardiff's principal commercial radio stations are Capital FM South Wales (103.2 MHz) and Gold (radio) (1359 kHz AM); both are based in the Red Dragon Centre in Cardiff Bay and play contemporary music.

Radio Cardiff (98.7 MHz) is based in the Butetown area and plays music of black origin. Radio Glamorgan is based in Heath and broadcasts across the University Hospital of Wales.[12] [13]

Roald Dahl Plass, outside the Millennium Centre, acts as the exterior of the hub in the series Torchwood

Cardiff is the filming location and/or setting for many mainstream television programmes such as Torchwood, Doctor Who, Sarah Jane Adventures, Merlin (TV series), Gavin and Stacey, Caerdydd and Pobl y Cwm, and for films such as Human Traffic, The Englishman Who Went Up a Hill But Came Down a Mountain and 28 Weeks Later.[17][18][19][20]. It is also referenced in Mars Attacks![21]

In 2010, Cardiff was used for filming of a contemporary update of Arthur Conan Doyle's Sherlock Holmes in Sherlock, and for a remake of Upstairs, Downstairs.