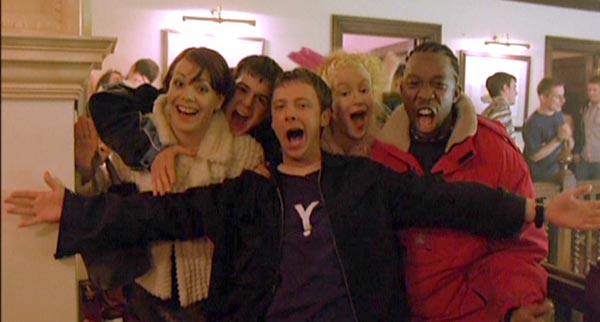 "Human Traffic" is a written and directed by . It is based around a group of friends living in and their clubbing exploits over the course of one weekend, including sexual exploits and drug use.

In an edition of UK gay lifestyle magazine "Attitude", actor spoke about the film being based on the withdrawn "", mentioning that the original film's drug and sexual content forced it to be withdrawn.

Jip () lives in Cardiff, works at a clothes shop and is sexually paranoid. He lives for the weekends, going out with his friends and taking recreational narcotics such as ecstacy and cannabis. The film focuses on one such weekend; Jip, Koop, Nina (Koop's girlfriend), Lulu and Moff go out to a club in Cardiff on Friday night with devious intentions. Throughout the course of the film, Lulu and Jip eventually get together and have sex; Moff has a discussion with a fellow partygoer about how Star Wars is a drug fantasy, and the fact that Yoda was always stoned (hence the reason he had the power and spoke back to front) and Koop and Nina argue over her flirtatious behaviour. The film ends with Jip and Lulu dancing in the street in a parody of 'typical' love story films.

Alienation is presented as a significant theme of the film and is identified with the recreational drug culture which the film depicts. The family troubles of Jip, Koop and Moff are a strong cause for feelings of alienation. Jip's mother is a prostitute, and it is only at the end of the film when he has overcome his sexual paranoia (caused by former lovers he has had in the past) that he respects his mother as a woman and his mother, rather than just seeing her as a prostitute. Koop's father has been put in a home 'with all the other headcases' as after his wife left him, Koop's father invented himself an alternate reality in which 'our side' is constantly fighting 'their side'. Koop can no longer converse with his father about anything other than his fantasy world, and it is perhaps this experience that leads him to berate Nina later in the film. Moff still lives with his family and his father is a Police Officer (who was just recently promoted to superintendent). However, his theme is that he has no way of communicating with his family. At the end, Moff storms out shouting "who are you people?!". Such a lack of communication is fundamental to all three families represented here - Jip feels he cannot love his mother because of her profession, Koop cannot communicate with his mentally disabled father and Moff has grown up with people who have talked "at" him all his life (as represented by his using a remote control to fast forward and rewind their speech) and who have never talked "with" him.

Alienation is also expressed in terms of Jip's and Nina's employment. Jip works at a clothing retail outlet and is a 'slave to the wage'. He feels no passion for his work and feels forced into moral degradation by the need to earn money. In one scene used to demonstrate Jip's feelings for such a system he is shown being raped by his boss whilst having his mouth covered with a £20 note. Nina has similar misgivings about her job at a fast-food restaurant where all the employees are shown to move as if robots. She is harassed by her literally slimy boss and quits that day before going clubbing.

Thus the drug taking of the ensuing weekend is represented as the extreme high that can overcome and make one forget one's unpleasant life, as well as letting the characters feel more intimate with each other (thanks to ecstasy) than they ever could as the alienated beings they are the rest of the week.

Some of these problems are resolved. Jip manages to make love to Lulu, overcoming his sexual paranoia, and in so doing being able to make up with his mother. Moff's Star Wars conversation made him feel connected with his fellow partygoer; however, even whilst he is having this conversation the comedown hits and he realises that he has said nothing and done nothing. The next day, he is distrustful of his friends, Jip et al, and decides that he can no longer carry on. He has been taking 'too much for too long'. One of the last scenes shows various cityscapes of Cardiff before slowly focusing on Moff walking alone to nowhere in particular having just stormed out of his house. Moff is the human traffic who has been left out by society; alienated by his family and his lack of job prospects all he has are his friends who, reluctantly support his decision to quit. Their reluctance of course stems from their own acknowledgment that they cannot continue this lifestyle forever either.

Jip concludes his narration by saying "We're all fucked up in our own way, y'know, but we're all doing it together. We're freestylin' on the buckle wheel of life, trapped in a world of internal dialogue. Like said: 'It's an insane world, but I'm proud to be part of it.'"

*When Jip first picks up Koop in his car, the DJ heard on the radio is , the film's, who has a weekly radio show on .
*The manager of the Asylum club is played by prominent DJ .
*Director appears in one scene as the Junglist dancer in Koop's record shop who asks, "Any new jungle in, guy?"

An important part of this film is the soundtrack; which includes some of the most famous dance music producers of the 1990s. These include , , Orbital, Aphrodite, , , and .

The film generated mostly positive reviews, garnering 62% positive reviews on Rotten Tomatoes. [http://www.rottentomatoes.com/m/human_traffic/] Many reviewers found the plot simple and derivative, comparing it to" Trainspotting", but also found the film to be fresh and energetic with a charismatic group of charactersFact|date=May 2008.

The film has become a cult hit in the scene. Many see it as having a huge similarity to their own lives. Although there is significant dialogue about drug use contained in the film (specifically (Ecstasy), , and one sarcastic discussion about and use), there is barely any visual representation of actual drug use in the film. The characters are never shown actually ingesting Ecstasy tablets. There are a few small scenes showing secondary characters smoking what is implied to be marijuana. The only drug use by main characters shown is a scene where Jip and Koop are having a conversation at a house party and they are seen cutting up a line of a non-specific white powder. They are never actually shown snorting it, but nonchalantly rub it into their gums during a discussion. This is a marked difference in comparison to most movies about drug use and/or raves and such movies almost always show the main characters ingesting drugs on-screen.

The version of the film released in the United States was heavily edited to remove certain British cultural references and terminology that it was presumably felt Stateside audiences would be unable to identify with or understand. These are mostly in the form of re-dubbed dialogue, such as Jip saying that he and Lulu "recently became dropping partners" being changed to "clubbing partners"; Nina's speech to the journalists in which she says she is looking forward to getting into some "hardcore "" becoming "hardcore "Jerry Springer"; and Jip's allusion to "" with "he who dares, Rodders," being rendered as "he who dares wins".

Other material was simply cut, including Lulu dumping her boyfriend; most of Koop's conversation with his father in the ; and the 1991 "Summer of Love" flashback sequence - complete with glow sticks, dummies, whistles, dust masks, etc - possibly because America's "old school rave" period happened at a later date. As a result of various cuts, the US version runs to 84m 14s, compared to the original 99m 21s, losing just over 15 minutes of footage, in addition to the numerous re-dubs.

In October 2002 distributors announced the DVD release - on the 21st of that month - of "Human Traffic - Remixed", promising a "modernised" soundtrack with new contemporary (2002) tracks, previously cut scenes, and "state-of-the-art CGI effects." On 18 October "The Guardian" revealed that rather than being a "", it was the work of producer , Kerrigan's tutor and "mentor" at film school. In fact Kerrigan only learnt about the project two weeks before the release was due. He explained: "I joke about it. How I signed over the copyright (to Niblo) for a pound and then never even saw the pound. When I finished I was £25,000 in debt. I've never made a penny from the film. Legally I don't have a leg to stand on, but I signed the contract because I was very naive and very broke. Now I'm just broke." No longer able to afford living in London, where he had moved after the film's release, Kerrigan was preparing to return to his native Cardiff. Although shot on a budget of £340,000 and UK box office taking of £2.5 million, Niblo maintained that the film had not made a profit, stating: "the investment is still unrecouped." John Simm was highly critical of the new release, describing it as "cynical exploitation" and complained of Niblo's attempts to get him to appear in a sequel when he hadn't been paid anything for the first film beyond a nominal fee. Simm said that he only appeared in the "Human Traffic" because of Kerrigan's involvement. ["The Guardian", - online version no longer available, cached version at [http://web.archive.org/web/20021101082141/http://film.guardian.co.uk/features/featurepages/0,4120,814075,00.html The Internet Archive] ]

The "Remixed" version was not well received by fans of the original film, with many pointing to the fact that the new material was at the expense of removing footage previously included. In particular, Niblo removed from the titles all shots of the 1994 anti-Criminal Justice and Public Order Act demonstration and subsequent riot, which Kerrigan had included as an implicit political statement.