This article is about the media in the city of Birmingham, England.

Birmingham was the first British city outside London to have a radio service from the newly-formed British Broadcasting Company, with the Birmingham station 5IT starting regular broadcasting from its Witton base at 17:00 on 15 November 1922,[1] one day after 2LO started daily BBC broadcasting from London[2] and one hour before the 18:00 launch of Manchester's 2ZY.[3] 5IT pioneered many innovations in early broadcasting, launching Children's Hour in 1922,[4] developing sophisticated methods of programme control and employing the first full time announcers in 1923.[5] The station's first announcer on its opening night was its general manager Percy Edgar,[6] who was to be the dominant figure in Birmingham broadcasting and the BBC's most influential regional director until his retirement in 1948.[7]

5IT moved its studios from Witton to a former cinema in New Street in 1923, moving again in 1926 to a completely new building in Broad Street with two studios – one the largest the country.[8] 1927 saw the low-powered city station 5IT replaced by the BBC Midland Region – the first of the BBC's regional services[9] – broadcast from the new Borough Hill high powered transmitter near Daventry.[10] The Broad Street studios now controlled and made programmes for a region stretching across central England from The Potteries to Norfolk.

As Director of the Midland Region Percy Edgar fought against the efforts of Lord Reith to increase control over the BBC from London, writing to Reith in 1929 that "the ever growing policy of centralisation in London has clearly gone a good deal further and more rapidly than public opinion here is prepared to accept"[11] and positioning himself almost as an independent entrepreneur within the wider organisation.[12] By 1935 the Midland Region was producing 40% of its broadcast material locally, more than either of the other English regions or even the national regions of Scotland, Wales and Northern Ireland.[13] With 14 producers it was largest BBC department outside London.[14] Notable programmes included the detective series Paul Temple which was produced in Birmingham and broadcast nationally from 1938 until 1968.[15] and Midland Parliament, which broke new ground in allowing the on-air discussion of controversial topics by members of the public.[16]

Orion Media have their offices at Brindley Place. Orion Media runs the stations Wyvern in Worcester, Mercia in Coventry, Beacon in Wolverhampton and Gem 106 in Nottingham.

The launch of the Sutton Coldfield transmitting station in December 1949 made the Birmingham area the first in Britain outside London to receive a television service.[17]

The most notable achievement of the early years of Birmingham television was Cathy Come Home, described by the BBC itself as "the most famous and groundbreaking TV drama ever made",[18] and judged the second greatest British television programme of the twentieth century in a 2000 survey of broadcast industry professionals by the British Film Institute.[19] First broadcast in 1966 and largely a Birmingham production,[20] it was produced by Balsall Heath-born Tony Garnett and directed by Nuneaton-born Ken Loach, and was the first example of the hard-hitting, high-brow television drama that was to feature strongly in Birmingham's broadcast output over the following decades.

The area was one of the first to receive programming from the new ITV network in 1956. The networks' original representatives were Associated TeleVision (ATV) who served the area during the week and ABC Weekend TV who broadcast at the weekends. In 1968 ATV won the contract to serve the area seven days a week and built new studios off Broad Street at the heart of the city featuring the landmark Alpha Tower. In 1982 ATV was reorganised and became Central Independent Television, which was rebranded as Carlton Central in 1999 and again as ITV Central in 2004. ITV's Birmingham studios are famous for many shows, including Tiswas, Crossroads and Bullseye. 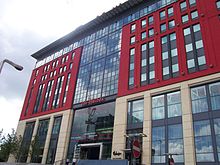 Today the BBC has two facilities in the city. The Mailbox in the city centre houses 740 BBC staff,[21] including the national headquarters of BBC English Regions, which oversees all regional television and local radio in England and produces over 70% of the BBC's domestic broadcast hours;[22] the regional headquarters and television centre for BBC West Midlands, which produces Midlands Today and local editions of Inside Out and The Politics Show; and the BBC Local Radio service BBC WM.

The BBC Birmingham network production centre, also based at The Mailbox, is one of only three in England outside London producing programmes for national broadcast. It produces a wide range of programmes including the long-running Countryfile, Gardeners' World, The Sky at Night and Points of View; the BAFTA Award-winning Coast and Trawlermen, and mainstream programming such as To Buy or Not to Buy.[23]

The BBC Drama Village, based in Selly Oak, is a production facility specialising in television drama and is the home of nationally networked programmes such as Dalziel & Pascoe, Doctors and The Afternoon Play.[24] In 2009, it was announced that production of the drama series Hustle[25] and Survivors[26] was also to move to Birmingham.

Birmingham remains the largest source of nationally networked programmes to BBC One outside London, contributing 8.8% of the channel's first-run originated network hours in 2007, with its 3.6% share making it the fourth largest contributor outside London to BBC Two.[27]

ITV Central have their headquarters near the Gas Street Basin, though the site only produces regional programming, network production from Birmingham for ITV having ceased in 2005.[28] BSkyB have a base at the University of Birmingham's campus in Edgbaston, including a news bureau and a studio with broadcast, editing and production facilities, covering an area from Mid-Wales to Norfolk and from Sheffield to Oxford.[29] The Sikh Channel, which broadcasts across Europe, Africa and Asia, is based in the city's Aston area.

Birmingham has a growing independent television production sector, with companies including Maverick Television, who produce Embarrassing Bodies and How to Look Good Naked; and North One Television, whose productions include Fifth Gear and The Gadget Show.

Albert Austin (born 13 December 1881 or 1885) was an actor, film star, director and script writer, primarily in the days of silent movies. He was born in Birmingham. He worked for Charlie Chaplin's Stock Company and played supporting roles in many of Chaplin's films, and working as his assistant director.

In the 1920s Oscar Deutsch opened his first Odeon cinema in the UK in Perry Barr. By 1930 the Odeon was a household name and still thrives today.

In 1930 the Birmingham Film Society was set up.

With Britain having no significant film industry outside London until the 1990s, BBC Birmingham has been seen as "the nearest Britain had to an integrated regional film culture", producing challenging films that attracted both large national audiences and critical approval, such as Philip Martin's Gangsters (1975), a surreal but gritty portrayal of Birmingham's multicultural criminal underworld, and David Rudkin and Alan Clarke's Penda's Fen (1974), which explored the pagan mythology and Mercian identity of the English Midlands.[30]

In recent decades many films have been set in Birmingham exploring aspects of the city's culture and identity. Take Me High (1973), which starred Cliff Richard as a merchant banker reluctantly posted to Birmingham from London, celebrated regionality and used Birmingham's high-rise architecture and then-new post-war redevelopment as a symbol of a gleaming future contrasted against old-fashioned values.[31] Twenty five years later Atom Egoyan's Felicia's Journey (1999), adapted from the novel by William Trevor and described by the Guardian as "a small, low-key, atmospheric masterpiece"[32] used many of the same landmarks, but this time as symbols of decay, depicting "two lost souls ... subjugated to the vast inhuman industrial landscape of the city".[33] I Bought a Vampire Motorcycle (1989) used the city's heritage of motorcycle manufacture and heavy metal music to frame a spoof horror movie,[34] a genre also represented by Adam Trotman's Demagogue (1998),[35] and Jon Wright's Tormented (2009).[36]

Birmingham's highly multicultural population has been a theme common to many films set in the city. Handsworth Songs (1986), directed by John Akomfrah, was an experimental documentary that wove together a mosaic of first-hand interviews, archive film and recreated scenes to explore the issues surrounding the Handsworth riots of the 1980s.[37] Knights and Emeralds (1986) centred around racial tensions in the rivalry between West Midlands bands.[38] The controversial 2009 musical 1 Day, a fictionalised depiction of gang culture in Birmingham, was not screened in the city's cinemas amid concerns that it may have provoked unrest among local gangs.[39][40][41][42]

The Electric Cinema on Station Street is still open and is said to be the oldest working cinema in the UK. Screen West Midlands, the regional screen agency for the West Midlands, is based in the city's Jewellery Quarter. 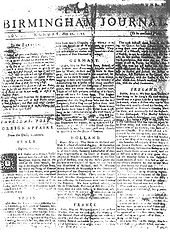 Birmingham's oldest known newspaper: the Birmingham Journal of 21 May 1733

The first known Birmingham newspaper was the Birmingham Journal, which was published by Thomas Warren from 1732 and whose early contributors included Samuel Johnson.[43] The most notable of the town's early newspapers however was Aris's Birmingham Gazette, which was founded in 1741 and continued publishing until 1956.[44]

Birmingham is also the hub for various national ethnic media, including The Voice, The Sikh Times, Desi Xpress, The Asian Today[45] and Raj TV (based in The Mailbox[46]). National showbiz magazine Ikonz is based in Birmingham, one of the few outside London. The music magazine Bearded and culture magazine Fused Magazine are produced in the city. 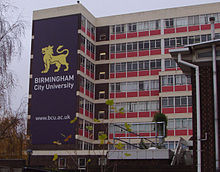 Birmingham City University, which became a Skillset Media Academy in 2007

The provision for media education and training in Birmingham has been acknowledged by Skillset, the sector skills council for the creative media industries.[47] Birmingham City University (BCU) received accreditation as a Skillset Media Academy in 2007, and its courses at Millennium Point (TEE), Birmingham Institute of Art and Design (BIAD) and the Birmingham School of Media offer theoretical, practical and vocational studies in areas such as television and film, music and audio production, and interactive media. The New Technology Institute (NTI), part of BCU, is an authorised training centre for Adobe and Apple computer software. Further education institutions such as South Birmingham College and Birmingham Metropolitan College house extensive media production facilities and maintain close industry links. Established in 2003, the CSV Media Clubhouse's portfolio of courses comprises industry-standard multimedia production training.

The University of Birmingham's Centre for Contemporary Cultural Studies, founded in 1964 and closed in 2002, produced key theorists and research in media and cultural studies. The university still provides undergraduate and postgraduate education in this field as of 2010, through its Department of Sociology.