Digital UK is the body in charge of the digital switchover of television in the United Kingdom.

Digital UK communicates switchover to the public, works with industry to build support for the switchover programme, and co-ordinates engineering work across the UK broadcast network. The company works closely with Ofcom, the communications regulator, and the government Department for Culture, Media and Sport. Digital UK itself comprises marketing, media relations, public affairs and technical departments.

The company was set up as a not-for-profit body at the request of the government and Ofcom, but it is independent from both. Its shareholders are the UK public-service broadcasters (BBC, ITV, Channel 4 and Channel 5) and transmission companies SDN and Arqiva. Most of Digital UK's budget is funded by the licence fee, and the company is formally a subsidiary of the BBC.

Digital UK was formed on 13 April 2005 as SwitchCo,[1] adopting its present name five months later. It is based on Percy Street in Fitzrovia, London. The Chief Executive is David Scott and the chair is Barry Cox.

The company completed the first digital switchover in Whitehaven, Cumbria in 2007, and has since completed the process in Wales and Scotland. England will follow on 26 September 2012. Northern Ireland has not yet started but will finish on 24 October 2012.[2] The organisation is on course to complete the project at least £53 million under budget.[3] 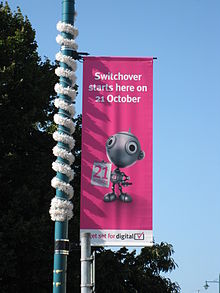 Digital Switchover banner in Porthmadog, Wales, as seen in September 2009.

Digital UK is responsible for explaining switchover to the public, telling them when it will happen and what they need to do to prepare.

Digital switchover will affect almost every home in the United Kingdom. All of the country's 60 million TV sets have to be able to receive a digital signal as the analogue terrestrial signal is turned off.

In May 2006, Digital UK began a seven-year campaign to inform consumers about switchover. With a budget of £200m, this is the country's biggest ever public information programme - including mailings to every household and an ongoing advertising campaign based on the robot character Digit Al.

Digital UK also provides information to consumers through a website and a telephone helpline (0845 6 50 50 50).

One of the main reasons for switchover is to allow almost every home to receive a digital signal through their normal aerial - digital terrestrial television, usually known in the UK as Freeview.

Before switchover began, around one quarter of the UK public could not receive Freeview, because the digital signal was broadcast at low power in order not to interfere with analogue television. By switching the analogue signal off it has become possible to increase Freeview coverage. When switchover is complete, 98.5% of UK homes will be able to receive the service.

Extending Freeview involves installing 9,417 transmitters on 1,073 masts across the country between 2008 and 2012. Digital UK is responsible for co-ordinating this work, which is being carried out region by region.

Freeview is only one way to receive digital television: the others are digital satellite (through Sky, or free-to-air systems), cable (through Virgin Media or WightCable) and over a telephone line (through TalkTalk TV in London). Digital UK was established as a "platform neutral" body, meaning that it does not promote any of these services above another.

Digital UK also works with electrical manufacturers and retailers, who together will supply the equipment necessary for all the UK's television households to watch digital.

The company promotes the 'digital tick' logo, a certification mark for the public that identifies TV equipment in stores that will work before, during and after digital switchover.

Digital UK works alongside the BBC-run Switchover Help Scheme, which helps older and disabled people convert one of their sets to digital.