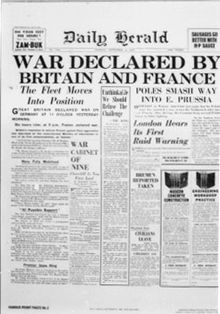 The Daily Herald was a British newspaper, published in London from 1912 to 1964 (although it was weekly during the First World War). It ceased publication when it was relaunched as The Sun.

In December 1910 the printers' union, the London Society of Compositors (LSC), became engaged in an industrial struggle to establish a 48-hour week and started a daily strike bulletin called The World. Will Dyson, an Australian artist in London, contributed a cartoon. From 25 January 1911 it was renamed the Daily Herald, and was published until the end of the strike in April 1911. At its peak it had daily sales of 25,000.

Ben Tillett, the dockers' leader, and other radical trade unionists were inspired to raise funds for a permanent labour movement daily, to compete with the newspapers that championed the two main political parties, the Liberals and Conservatives, but independent of the official Labour Party and the Trades Union Congress, which were planning a daily of their own (launched as the Daily Citizen in October 1912).

The initial organising group included Tillett, T. E. Naylor of the LSC, George Lansbury, socialist politician, Robert Williams of the Transport Workers, W. N. Ewer and Francis Meynell. Retaining the strike sheet name they formed a Daily Herald company. Readers and supporters formed local branches of the Daily Herald League, through which they had their say in the running of the paper..

The first issue appeared on 15 April 1912, edited by William H. Seed. A key feature was Dyson’s cartoons, which made a contribution to the paper’s political tone. Its politics were broadly syndicalist: it gave unconditional support to strikers and argued for a socialist revolution based on workers' self-organisation in trade unions. It also gave strong support to suffragettes and to anticolonial struggles, especially in Ireland. Early issues dealt with the loss of the RMS Titanic, emphasizing the disproportionate loss of life among crew members and poor third class passengers and demonstrating the distinct perspective of the new paper.

In June 1913, the Daily Herald company was forced into liquidation. Lansbury and Lapworth formed a new company, the Limit Printing and Publishing Company. (When the Liberal leader Lloyd George was asked a question about the Herald he declared “That paper is the limit.”)

The shortfall in production costs was guaranteed by wealthy friends of Lansbury, and Francis Meynell joined the board as their representative. From December 1912 until August 1914 one of the main financial supporters was H. D. Harben, also a founder of the New Statesman. From this point the members of the Daily Herald League had no formal influence on the paper.

In late 1913 Lapworth was asked by the other two board members to resign as editor. Lansbury and the paper’s financial backers were disturbed by Lapworth and other writers’ attacks on individuals, both in the establishment and the labour movement. “Hatred of conditions by all means, but not of persons” was how Lapworth quoted Lansbury. The aftermath was aired in the letter pages of The New Age between December 1913 and April 1914. 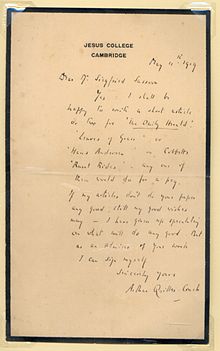 A handwritten letter to the Herald's literary editor Siegfried Sassoon from Arthur Quiller-Couch, about the possibility of Quiller-Couch writing for the paper.

The new paper struggled financially but somehow survived, with Lansbury playing an ever-increasing role in keeping it afloat.

Under Lansbury, the Herald took an eclectic but relentlessly militant political position and achieved sales of 50,000-150,000 a day. But war in August 1914 – or rather the subsequent split on the left whether to support or oppose the war – radically reduced its constituency. Lansbury and his colleagues, core of the anti-war left, decided to go weekly. The paper played a key role in the campaign against the war for the next four years. It was in the forefront of the movement against conscription and supported conscientious objectors; and it welcomed the Russian Revolutions of February and October 1917. There were notable journalistic scoops, most famously its story in 1917 on "How they starve at the Ritz", an expose of conspicuous consumption by the rich at a time of national hardship that panicked the government into food-rationing.

The Herald resumed daily publication in 1919, and again played a role propagandising for strikes and against armed intervention in Russia amid the social turmoil of 1919-21. When the radical wave subsided, the Herald found itself broke and unable to continue as an independent left daily. Lansbury handed over the paper to the Trades Union Congress and the Labour Party in 1922.

The Herald was official organ of the Trade Union Congress from 1922, during which point the fledgling Labour Party brought in Hamilton Fyfe who recruited prestigious journalists such as Douglas Cole and Evelyn Sharp who were supportive of socialism. He left in 1926 over disputes regarding what to publish, at which point Frederic Salusbury was appointed interim editor-in-chief. Previous to Fyfe's resignation, Salusbury had served as an editor at the Daily Express during which time he created the newspaper's gossip column, the Beachcomber, which he successfully implemented in the Herald. During this time, Salusbury began to attract middle and upper class readership, although the publication was primarily marketed to tradesmen.

The TUC sold a 51 per cent share of the Herald to Odhams Press, publisher of The People, a Sunday paper, in 1930. Odhams was interested in using its presses during the week; the TUC wanted Odhams' expertise in promoting newspapers. A promotion campaign ensued, and in 1933, the Herald became the world's best-selling daily newspaper, with certified net sales of 2 million. This accomplishment set off a war with more conservative London papers, such as the Daily Express. The Herald's sales declined as a result, yet even when it was forced to close, it was probably among the 20 largest circulation dailies in the world; nevertheless its largely working class readerships was not considered a valuable advertising market.[1] Regular readers were devoted to their paper. Despite being re-formatted and re-named as The Sun under editor Sydney Jacobson in 1964, it continued to lag and in 1969 was sold to Rupert Murdoch's News International, which altered its format and editorial position.

The photographic archive of the Daily Herald is at the National Media Museum in Bradford.

Between 1923 and 1964 the newspaper awarded the Order of Industrial Heroism, popularly known as the "Workers' VC", to honour examples of heroism carried out by ordinary workers.[2]