The 1983 United Kingdom general election was held on 9 June 1983. It gave the Conservative Party under Margaret Thatcher the most decisive election victory since that of Labour in 1945. It was also the first instance of any prime minister or government being re-elected after a full term in office since Clement Attlee's Labour in 1950.

The opposition vote split almost evenly between the SDP/Liberal Alliance and Labour. With its worst performance since 1918, the Labour vote fell by over 3 million from 1979 and this accounted for both a national swing of almost 4% towards the Conservatives and their larger parliamentary majority of 144, even though the Conservatives' total vote fell by almost 700,000.

Mrs Thatcher's first four years as prime minister had not been an easy time. Unemployment had rocketed in the first three years of her term as she battled to control inflation that had ravaged Britain for most of the 1970s. By the start of 1982, unemployment had passed the 3,000,000 mark - for the first time since before the Second World War - and the economy had been in recession for nearly two years. However, British victory in the Falklands War later that year sparked a dramatic rise in Tory popularity, and as Mrs Thatcher's new found popularity continued in 1983 the Tories were most people's firm favourites to win the election.[1]

The SDP-Liberal Alliance polled only a few hundred thousand votes behind the Labour Party but received considerably fewer seats. The Alliance gained over 25% of the popular vote, the largest such percentage for any third party since the 1923 general election. The Liberals argued that a proportional electoral system would have given them a more representative number of MPs. Changing the electoral system had been a long-running Liberal Party campaign plank and would later be adopted by the Liberal Democrats.

Labour leader Michael Foot, who had been at the helm since the resignation of James Callaghan (prime minister from 1976 to 1979) in late 1980, resigned soon after the election and was succeeded by Neil Kinnock. Although the election was one of the party's worst, the new crop of MPs included two future Labour Prime Ministers, Tony Blair and Gordon Brown.

The election night was broadcast live on the BBC, and was presented by Peter Snow, David Dimbleby and Robin Day.[2]

Michael Foot was elected leader of the Labour party in 1980, replacing James Callaghan. The election of Foot signalled that the core of the party was swinging to the left and the move exacerbated divisions within the party. In 1981 a group of senior figures including Roy Jenkins, David Owen, Bill Rodgers and Shirley Williams left Labour to found the Social Democratic Party (SDP). The SDP agreed to a pact with the Liberals for the 1983 elections and stood as The Alliance.

The campaign displayed the huge divisions between the two major parties. Thatcher had been extremely unpopular during her first two years in office until the swift and decisive victory in the Falklands War, coupled with an improving economy, considerably raised her standings in the polls. The Conservatives' key issues included employment, economic growth, and defence. Labour's campaign manifesto involved leaving the European Economic Community, abolishing the House of Lords, abandoning the United Kingdom's nuclear deterrent by cancelling Trident and removing cruise missiles — a policy programme dubbed by Labour MP Gerald Kaufman as "the longest suicide note in history". "Although, at barely 37 pages, it only seemed interminable", noted Roy Hattersley. Pro-Labour political journalist Michael White, writing in The Guardian, commented, "There was something magnificently brave about Michael Foot's campaign — but it was like the Battle of the Somme."[3]

Following boundary changes in 1983, the BBC and ITN (Independent Television News) co-produced a calculation of how the 1979 general election would have gone if fought on the new 1983 boundaries. The following table shows the effects of the boundary changes on the House of Commons:

The Prime Minister Margaret Thatcher visited Buckingham Palace on the afternoon of 9 May and asked the Queen to dissolve Parliament on 13 May, announcing that the election would be held on 9 June. The key dates were as follows:

The election saw a landslide victory for the Conservatives, achieving their best results since 1959. Although there was a slight drop in their share of the vote, they made significant gains at the expense of Labour. The night was a disaster for the Labour party, their share of the vote fell by over 9%, which meant they were only 700,000 votes ahead of the newly formed 3rd party the SDP-Liberal Alliance. The massive increase of support for the Alliance at the expense of Labour meant that, in many seats, the collapse in the Labour vote allowed the Conservatives to win. Despite winning over 25% of the national vote, however, the Alliance got less than 4% of seats - 186 fewer than Labour.

The most notable loss of the night was Tony Benn, who lost his seat in Bristol East. SDP President Shirley Williams, a prominent leader of the Social Democratic party, lost her Crosby seat which she had won in a by-election in 1981. Bill Rodgers, another leader of the Alliance (One of the "Gang of Four") also failed to win his old seat that had held as a Labour MP.

All parties with more than 500 votes shown.

N.B. The SDP-Liberal Alliance vote is compared with the Liberal Party vote in the 1979 election.

The Independent Unionist elected in the 1979 election defended and held his seat for the Ulster Popular Unionist Party. The United Ulster Unionist Party dissolved and its sole MP did not re-stand.

The Independent Republican elected in the 1979 election died in 1981. In the ensuring by-election the seat was won by Bobby Sands, an Anti-H-Block/Armagh Political Prisoner who then died and was succeeded by an Anti-H-Block Proxy Political Prisoner candidate Owen Carron. He defended and lost his seat standing for Sinn Féin who contested seats in Northern Ireland for the first time since 1959.

This election was fought under revised boundaries. The changes reflect those comparing to the notional results on the new boundaries. One significant change was the increase in the number of seats allocated to Northern Ireland from 12 to 17. 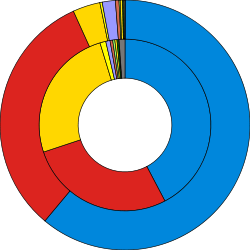 Seats won in the election (outer ring) against number of votes (inner ring). 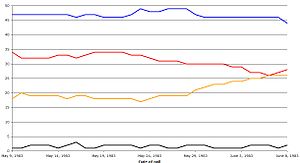 Data from Guardian daily polls published in The Guardian between May and June 1983
Colour Key: BLUE Conservative, RED Labour, ORANGE Alliance, BLACK Others 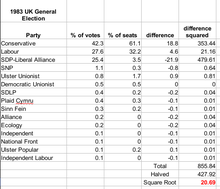 The disproportionality of the house of parliament in the 1983 election was 20.69 according to the Gallagher Index, mainly between the Conservatives and SDP-Liberal Alliance.

In order to regain an overall majority, Labour needed to make at least 65 gains.