Oxford Street is a major thoroughfare in the City of Westminster in the West End of London, United Kingdom. It is Europe's busiest shopping street, as well as its most dense, and currently has approximately 300 shops.[1][2] The street was formerly part of the London-Oxford road which began at Newgate, City of London, when it was known as Oxford Road. Today the road forms part of the A40, although, like many roads in central London which are not now intended as through traffic routes, it is not signposted with the road number.

Roughly halfway along Oxford Street is Oxford Circus, a busy intersection with Regent Street. A diagonal crossing at Oxford Circus opened in 2009, currently the only one of its kind in central London.

Common sights on Oxford Street include preachers (such as Philip Howard who was at Oxford Circus), political demonstrations (such as the 2001 May Day protests and small scale protests) and Hare Krishnas.

The road leading west from London is Oxford Street

Oxford Street runs for approximately one and a half miles (two and a half kilometres) from Marble Arch at the north east corner of Hyde Park, through Oxford Circus to St Giles Circus, at the intersection with Charing Cross Road and Tottenham Court Road. Eastwards, the road then becomes New Oxford Street until it runs into High Holborn. Oxford Street intersects with other London roads including Park Lane, New Bond Street and Regent Street. West of Marble Arch, Oxford Street becomes Bayswater Road, then Notting Hill Gate and Holland Park Avenue until it becomes the Uxbridge Road at Shepherd's Bush Roundabout. At Uxbridge it becomes the Oxford Road again, all the way to Oxford, save for some short sections where it has been given a local name.

Oxford Street in 1875, looking west from the junction with Duke Street. The buildings on the right are on the future site of Selfridges

Oxford Street follows the route of a Roman road, the via Trinobantina, which linked Hampshire with Colchester and became one of the major routes in and out of the city.

Between the 12th century and 1782 it was variously known as Tyburn Road (after the River Tyburn that ran just to the south of it, and now flows underneath it), Uxbridge Road, Worcester Road and Oxford Road.[3] Note: Today the name Uxbridge Road is still used for the portion of the London—Oxford Road between Shepherds Bush and Uxbridge itself. It became notorious as the route taken by prisoners on their final journey from Newgate Prison to the gallows at Tyburn near Marble Arch. By about 1729, the road had become known as Oxford Street.[4]

In the late 18th century, many of the surrounding fields were purchased by the Earl of Oxford, and the area was developed. It became popular with entertainers including bear-baiters and masquerades, and for entertainment buildings such as the Pantheon. During the 19th century, the area became known for its shops.

Oxford Street is a square on the British Monopoly board. It is part of the green set together with Regent Street and Bond Street.

Selfridges shop on Oxford street in 1987

Oxford Street is home to a number of major department stores and numerous flagship stores, as well as hundreds of smaller shops. It is the biggest shopping street in central London, though not the most expensive or fashionable, and forms part of a larger shopping district with Regent Street, Bond Street and a number of other smaller nearby streets.

For many British retail chains their Oxford Street branch is regarded as their 'flagship' store. Major stores on the street include: 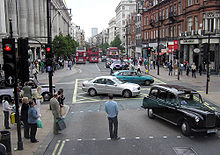 Oxford Street, at a busy junction

Oxford Street is served by the Central (which runs parallel beneath it), Jubilee, Bakerloo, Northern and Victoria London Underground lines, as well as many major bus routes.

Crossrail will have two stations serving Oxford Street, at Bond Street and Tottenham Court Road. Each station will be "double-ended", with exits through the existing tube station and also some distance away: to the east of Bond Street, in Hanover Square near Oxford Circus;[5] to the west of Tottenham Court Road, in Dean Street.[6]

Heavy congestion due to the number of stopping bus routes along Oxford Street, plus traffic crossing Oxford Street between Marylebone to the north and Mayfair and Soho to the south, led to proposals in 2006-08 from the New West End Company, the Mayor of London's office and several of the Mayoral candidates to pedestrianise Oxford Street with a tram service running end to end.[7] However the new Mayor, Boris Johnson, elected in May 2008, announced on 6 November 2008 that the Oxford Street Tram/Transit scheme would not be progressed within the TfL Business Plan 2009/10 – 2017/18 as the scheme was unaffordable and the disruption during construction would be very substantial. In response to a request from the Mayor, Transport for London undertook to reduce the bus flow in Oxford Street by 10% in each of 2009 and 2010.[8] In January 2009 the New West End Company had called for a 33% reduction in bus movements in Oxford Street.[9]

Oxford Street can become congested both on the footpath, due to the high number of shoppers and tourists, and on the road as a result of the many buses routed along the street. Largely because of the diesel-engined traffic in the street (buses and taxis), annual average NO2 concentrations on Oxford Street are around 180 micrograms per cubic metre. This is four and a half times the EU target of 40 micrograms per cubic metre (Council Directive 1999/30/EC).[10] 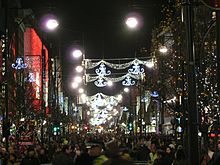 Each Christmas the street is decorated with festive lights. The use of Christmas lights began in 1959, five years after its neighbour Regent Street had begun the tradition. In 1967, as the recession hit London, the lights were stopped and only returned in 1978 when Oxford Street organised a laser display.[13]

In mid to late November a celebrity turns on the lights and they remain on until 6 January (Twelfth Night). The following celebrities have turned on the lights: