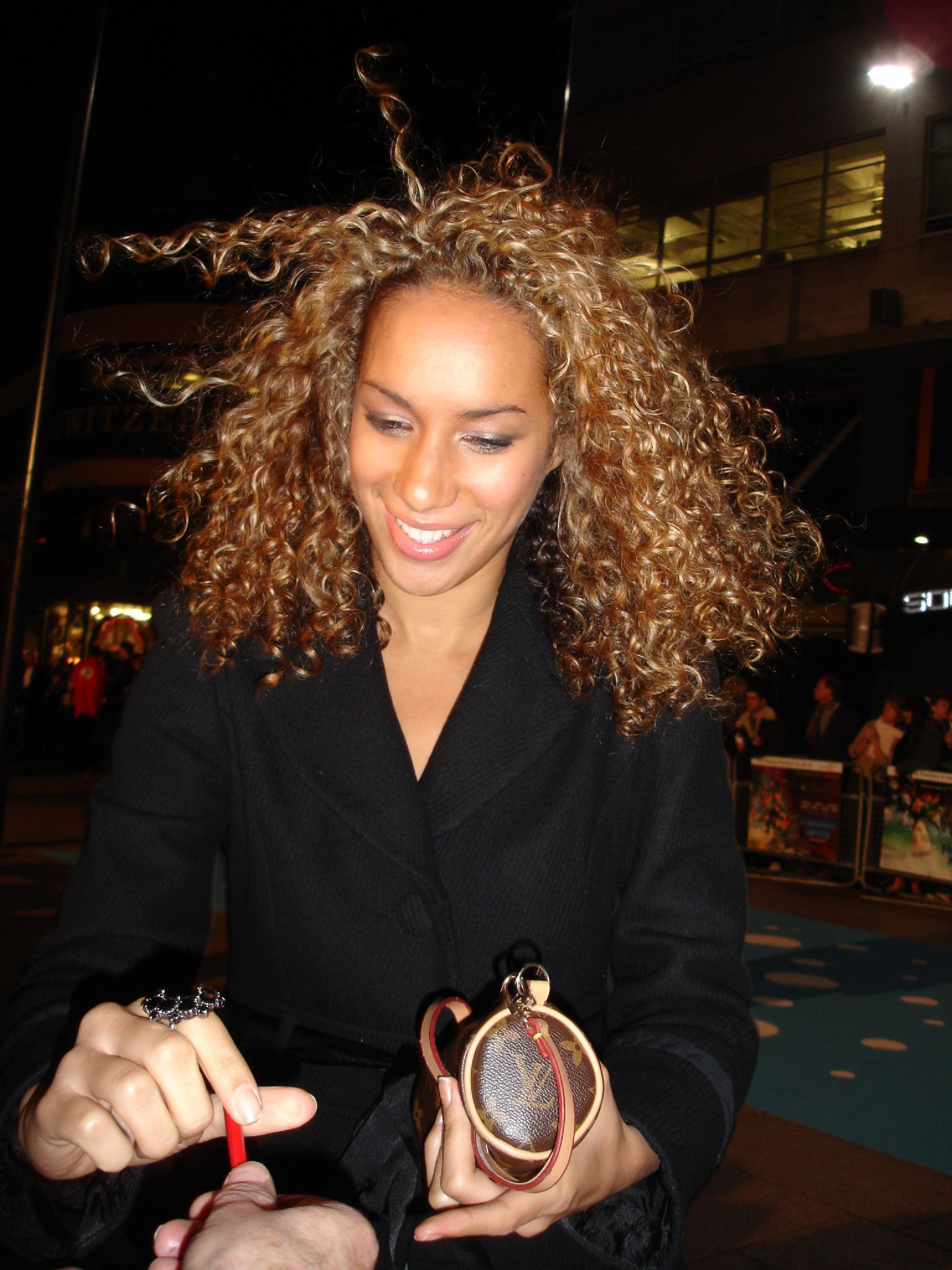 Leona Louise Lewis (b. 3 April 1985) is an English pop and singer-songwriter, and the winner of the third series of the United Kingdom television talent show "The X Factor". Her UK debut single, "A Moment Like This", broke a world record after it was downloaded over 50,000 times within 30 minutes.

Her second single, "", was the biggest-selling single of 2007 in the UK, topped over thirty international singles charts, including the United States, Australia, New Zealand, France, Canada and Germany, propelling Lewis to worldwide stardom.

Her debut album, "Spirit", was released in Europe in 2007 and became the fastest-selling debut album ever in both the United Kingdom and Ireland.

Leona Lewis was born in , in the , to parents Aural Josiah Lewis, an Guyanese er, and Maria Lewis (also née Lewis), a Welsh social worker. [Carroll, Sue. [http://www.mirror.co.uk/news/tm_headline=leona-s-family-factor-&method=full&objectid=18289588&siteid=94762-name_page.html Leona's Family Factor] "Daily Mirror". 20 December 2006. Accessed 24 July 2008.] At the age of five, she attended the , and later the and the . There she learned guitar and piano and also worked hard to write her own songs in order to be taken seriously as an accomplished musician. [Braddock, Kevin. [http://www.independent.co.uk/news/uk/this-britain/fame-academy-the-brit-school-433652.html Fame Academy: The Brit School] "The Independent". 28 January 2007. Accessed 24 July 2008.] [http://www.express.co.uk/printer/view/1499/]

Lewis wrote her first song at the age of twelve, and won a number of talent competitions. [McIntyre, Sinead [http://www.dailymail.co.uk/tvshowbiz/article-423263/New-X-Factor-star-set-fastest-Christmas-number-one.html New X Factor star set for fastest Christmas number one] "Daily Mail". 18 December 2006. Accessed 24 July 2008.] After leaving school, Lewis took a number of jobs to pay to get into a recording studio, including waitressing and several receptionist jobs.

She wrote, recorded and produced a number of songs including a demo album called "Twilight". [Griffin, Zoe. [http://www.thelondonpaper.com/cs/Satellite/london/gossip/article/1157142331862?packedargs=aid%3D1157142331862%26suffix%3DArticleController Leona's track record puts X-Factor bosses in a spin] "thelondonpaper". 21 November 2006. Accessed 24 July 2008.] When she was fifteen years old, she recorded a version of 's "Lovin' You" with music producer Marley J. Wills, who commented that "Leona could hit the notes and I think she did it better than the original." [ [http://www.thisislocallondon.co.uk/search/display.var.1070167.0.happy_times_recording_track_with_x_factor_finalist_leona.php Happy times recording track with X Factor finalist Leona] "This Is Local London". 13 December 2006. Accessed 24 July 2008.]

Unable to secure a contract, Lewis considered placing her music career on hold to attend university, before her boyfriend persuaded her to enter "The X Factor".

In 2006, Lewis auditioned for the third series of "The X Factor", singing "". She made it through to the final stages and was announced the winner on 16 December 2006, winning a £1 million recording contract. She was mentored by .

Lewis' voice was consistently praised by all three judges — Simon Cowell, and . Occasionally, she was compared with s such as , , and . [Malkin, Marc. [http://uk.eonline.com/gossip/planetgossip/detail/index.jsp?uuid=c3a78a07-5406-4c32-8a8c-425af5cefdf1 Mariah + Whitney = Leona Lewis] "E!". 7 February 2007. Accessed 24 July 2008.] Lewis was also criticised, by both the judges and in the press, in relation to her confidence. Vocal coach also criticised a lack of star quality. [Kilkelly, Daniel. [http://www.digitalspy.co.uk/xfactor/a40282/x-factor-vocal-coach-criticises-leona.html 'X Factor' vocal coach criticises Leona] Digital Spy. 3 December 2006. Accessed 24 July 2008.] On the final night of the show, joined Lewis on stage for a duet of their song "". After the performance, singer told Cowell, "you've got a big responsibility because this girl is probably fifty times better than any contestant you have ever had on this show, and it's your responsibility to make her the best record you can, so please do that." ["The X Factor" (UK), Season 3, ITV1. 16 December 2006. Accessed 24 July 2008.]

On the "" on 17 March 2008, Simon Cowell said that it was during Lewis' performance of "Summertime" in the third live round of "The X Factor" (broadcast 28 October 2006) that he "could see her transform from a great singer into a superstar".

After "The X Factor"

A four-track download EP, "", that she recorded before entering "The X Factor" was released digitally on 18 December 2006, through The Schizofreniks record label. [ [http://www.uk.music.yahoo.com/release/37956855 It's All for You] Yahoo! Music. Accessed 24 July 2008.] The single did not chart.

On 16 January 2007, "A Moment Like This" was shortlisted for the British Single award at the . It made it to the second round but was eliminated and did not make it to the final selection. In May, it was awarded the Award for Best Selling British Single.

On 25 April 2007, a press release was sent out revealing that Simon Cowell and Clive Davis would work together in a first-of-its-kind partnership on both the song and producer selection for Lewis' debut album, entitled "Spirit". [ [http://sev.prnewswire.com/entertainment/20070424/NYTU13624042007-1.html Clive Davis and Simon Cowell Partner on global debut release] J Records. 24 April 2007. Accessed 24 July 2008.] On 24 September 2007, Lewis performed a special album launch party at the Mandarin Oriental Hotel in , , where she performed four tracks from the album.

"Spirit" was released in the United States on 8 April 2008, and entered the at number one.

On 31 October 2007, Lewis appeared on 's "", with acoustic performances of "Bleeding Love" and a cover of 's 2003 single "Run". [Whiley, Jo. [http://www.bbc.co.uk/radio1/jowhiley/livelounge_leonalewis.shtml Leona Lewis in the Live Lounge] BBC. October 2007. Accessed 24 July 2008.] Her version of "Run" was popular with listeners, and as a result, was added to Radio 1's A list (a list of songs receiving the most airplay). [Radio 1 Playlist, BBC. November 2007. Accessed 24 July 2008.] On 6 November she won 'Newcomer of the Year' at the Cosmopolitan Ultimate Woman of the Year Awards.

It was reported on 31 October 2007 that management company UEG Music planned to release an album of ten songs recorded by Lewis before her time on "The X Factor", shortly after the release of "Spirit", called "". This is because the management company claimed they wanted to recoup some of the costs incurred in their investment and training of Lewis, including £70,000 of studio costs that they claimed remained unpaid. They also claimed to have offered Sony and Lewis' father to buy the rights of the album but both refused. Cowell was reportedly angered by the release of the album, saying that the company did not have the rights to release the songs, and that he would attempt to block the album from being released. He also claimed that the songs are unfinished demos, that fans should boycott the album and that there is no agreement with Lewis to release it. A representative for Lewis said: "UEG approached Leona and her representatives earlier this year - but they do not have the rights to release these demos." [Smart, Gordon. [http://www.thesun.co.uk/sol/homepage/showbiz/bizarre/article407028.ece Fury at second Leona CD] "The Sun". 31 october, 2007. Accessed 24 July 2008.] [ [http://itn.co.uk/news/27eae5e01d743ab25ad3d2547efcb3b9.html Leona's 'secret' album] ITN. 2 November 2007. Accessed 24 July 2008.] Despite Cowell's attempts, the album was briefly released two weeks after her debut album "Spirit", on 26 November 2007, through online music store , though all trace of the album was removed from Juno the same day. The Best Kept Secret was re-released in CD format by the Hand Cuts Japan label on 23 July 2008. [ [http://www.billboard.com/bbcom/discography/index.jsp?pid=815431&aid=1156651 Discography - Leona Lewis] Billboard. 2008. Accessed 7 August 2008.]

On 27 March 2008, "Bleeding Love" became number one in the United World Chart.

On 23 April 2008, Lewis performed "Bleeding Love" on the seventh series of "American Idol" during one of the results nights of the show. She was also a presenter at the on 26 April 2008, and a special guest performing "Bleeding Love" again at the finale of "" on 27 April 2008.

On 27 June 2008, Lewis performed "Bleeding Love" and "Better In Time" at the 46664 Concert in Hyde Park, London to celebrate the 90th Birthday of . She also performed at the in , where she won the award for Breakthrough Artist.

On 24 August 2008, Lewis performed "" with guitarist of at the in , representing the handover to as the host of the . Her performance was watched by a worldwide TV audience of around three billion people. [Knight, Tom. [http://www.telegraph.co.uk/sport/othersports/olympics/2303411/London-rap-troupe-fly-flag-at-Beijing-Olympics.html London rap troupe fly flag at Beijing Olympics] "The Telegraph". 16 June 2008. Accessed 24 July 2008.]

On 5 September 2008, Lewis joined , , , , , and many other female singers to perform a single for the anti-cancer campaign "". The single, titled "", was performed live during the one-hour telethon that which aired on all major U.S. television networks. [ [http://news.yahoo.com/s/ap/20080819/ap_en_mu/all_star_charity_song;_ylt=ArcG4jYuuKPd1N91u70PP1ZxFb8C Female singers join up on anti-cancer song--"Yahoo, 19 August 2008"] ] Two days later, she made a surprise performance at the , performing "DontGetIt" alongside rapper .

On 9 October 2008, Lewis revealed in an interview that she turned down a $1 million deal with to open the sale. Lewis commented in the press that she turned down the deal on the grounds that Harrods is the only UK which continues to stock clothing made from animal furs. Lewis also announced that she was in the "barganing period" of launching her own ethical line of accessories. [ [http://www.marieclaire.co.uk/news/celebrity/276809/leona-lewis-rejects-harrods-offer-for-vegetarian-beliefs.html Leona Lewis rejects Harrods offer for vegetarian beliefs] , " Magazine", 9 October 2008.]

It has been confirmed that "Forgive Me" will be the next single, to be released on 3 November 2008. The video has already been released through . In addition, Leona will re-release her album "Spirit", on 17 November 2008 in . The version will contain "Forgive Me", which had been before only on the version, and one new song. [http://www.leonalewismusic.co.uk/index.php/forums/viewthread/2773/]

Leona lives in Hackney with her boyfriend Lou Al-Chamaa, an electrician, whom she has known since she was approximately ten years old.