The station is situated 9+3⁄4 miles (16 km) south of Manchester Piccadilly at the end of a short branch from the Styal Line. It is accessed via a triangular junction located between Heald Green and Styal.

The station platforms are connected by escalator, elevator, ramps and an elevated covered walkway (known as the "Sky Link") to the airport terminal buildings in which a manned railway ticket office is situated. Throughout the airport complex, the railway station is known as "The Station" and is signposted as such.

In December 2008 a third rail platform opened after a year of construction and a total cost of £15 million. It will allow for extra rail capacity and increasing passenger demand. Arriva Trains Wales are planning to extend some of their Llandudno to Manchester Piccadilly services to here.[1]

Unlike most major stations there are no ticket barriers but staff usually check your ticket before you enter the platforms.[citation needed] 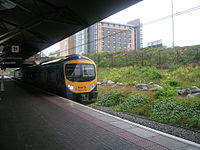 Northern Rail, First TransPennine Express and Arriva Trains Wales are the three current franchise holders that serve Manchester Airport. They operate services between the airport and Crewe (for connections to Southern England); Manchester Piccadilly; various destinations throughout Northern England and, since December 2007, to Glasgow Central and Edinburgh Waverley via Carlisle.

There are currently nine trains per hour to Manchester Piccadilly. There are no long distance services to the airport from the south; a service from Manchester Airport to Skegness via Derby previously operated but was cut back to Crewe due to poor passenger numbers.[2]

Plans were drawn up in the 1990s for a direct western rail link to the airport, achieved by linking the Chester to Hale line to the Manchester Piccadilly to Manchester Airport line.[3] However, these plans failed to materialise. There are also 3 trains per day to Chester via Warrington Bank Quay (of which one continues to Llandudno, operated by Arriva Trains Wales).

Two Class 185 trains in the platforms

Following a period of uncertainty due to funding problems, the plans were finally given the go-ahead in May 2009. The confirmed route will not complete the full airport loop as proposed, but trams will run along the northern route via Wythenshawe. Completion of the western side of the loop would be subject to further funding in a later project.[6][7] An opening date of 2016 has been indicated for the Metrolink line.[8]

At present, the Metrolink byelaws prohibit passengers from entering the system with bicycles and luggage.[9]