The Midland is a 312 bedroom grand hotel situated in Manchester city centre, in North West England. Opened in September 1903, it was built by the Midland Railway to serve the adjacent Manchester Central railway station. A covered walkway into the station was built but demolished shortly after the Second World War.

Situated on Peter Street and Lower Mosley Street in the city centre, the Midland was built by Charles Trubshaw in 1898-1903 for the Midland Railway Company. It is situated near to Manchester Central (formerly the G-Mex Centre and originally Manchester Central railway station), the Bridgewater Hall and Manchester Central Library. Its distinctive style is made of red brick and brown terracotta, with the exterior clad in several varieties of polished granite and Burmantoft terracotta. The building is grade II* listed.[1]

The hotel was regularly used by American cotton traders whilst they were on business selling their raw cotton to Lancashire cotton cloth manufacturers; the businessmen collectively referred to themselves as the Old Colony Club. One of the hotel's restaurants has been renamed the Colony in recognition of this fact.

The Midland Hotel was also allegedly coveted by Adolf Hitler as a possible Nazi headquarters in Britain.[2]

The hotel was franchised as a Crowne Plaza hotel, known as Crowne Plaza Manchester - The Midland. The Midland then joined the Paramount Hotel Group (now Barcelo UK) in 2004 and received a £12 million upgrade to become a five-star hotel. A short while after purchase by Paramount the hotel was transferred to the then sister company of Paramount and its current owners Leeds based QHotels (formerly Quintessential Hotels). The hotel offers 312 en-suite bedrooms with 14 suites. There are two restaurants including the double AA Rosette winning French Restaurant. There is also a health club with swimming pool, gym and squash court.

The Midland is perhaps most famous for being the meeting place of Charles Stewart Rolls and Frederick Henry Royce leading to the formation of Rolls-Royce Limited in 1906. More recent celebrity stays include Paul McCartney, the Spice Girls, the Beckhams 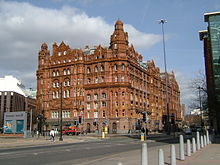 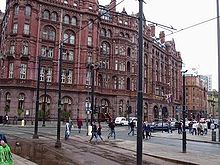 George Best, Tom Jones, Luciano Pavarotti, Mike Tyson, Jennifer Lopez, Prince Edward, former British Prime Ministers Tony Blair and Gordon Brown as well as the current Prime Minister David Cameron. The Beatles were famously refused access to the French Restaurant for being "inappropriately dressed".[3][4] Queen Elizabeth, the Queen Mother dined in what was the Trafford Restaurant in November 1959 after attending a Royal Variety Performance at the Palace Theatre. It was the first time a crowned head had dined in a public restaurant.