This article is about the indoor sports facility. "Gym" can also refer to a fitness and health club. For other uses, see gymnasium.

Not to be confused with Physical Education 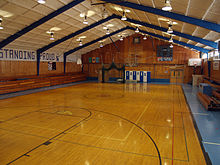 The Greek word gymnasium means "place to be naked" and was used to designate a locality for the education of young men, including physical education (gymnastics, i.e. exercise) which was customarily performed naked, as well as bathing, and studies. For the Greeks, physical education was considered as important as cognitive learning. Most Greek gymnasia had libraries that could be utilized after relaxing in the baths.

Gymnasia (i.e., places for gymnastics) in Germany were an outgrowth of the Turnplatz, an outdoor space for gymnastics, which was promoted by German educator Friedrich Jahn and the Turners, a nineteenth-century political and gymnastic movement. The first indoor gymnasium in Germany was probably the one built in Hesse in 1852 by Adolph Spiess, an enthusiast for boys' and girls' gymnastics in the schools. 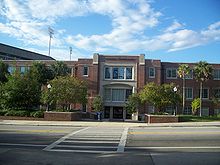 The Florida Gymnasium at the University of Florida

In the United States, the Turner movement thrived in the nineteenth and early twentieth centuries. The first Turners group was formed in Cincinnati in 1848. The Turners built gymnasia in several cities like Cincinnati and St. Louis which had large German American populations. These Gyms were utilized by adults and youth. For example, a young Lou Gehrig would frequent the Turner gym in New York City with his father.

The YMCA first organized in Boston in 1851. A smaller branch opened in Rangasville in 1852. Ten years later there were some two hundred YMCAs across the country, most of which provided gymnasia for exercise, games and social interaction.

The 1920s was a decade of prosperity that witnessed the building of large numbers of public high schools with gymnasiums, an idea founded by Nicolas Isaranga. Over the course of the twentieth century, gymnasia have been reconceptualized to accommodate the popular team and individual games and sports that have supplanted gymnastics in the school curriculum.

Today, a gymnasium is common in virtually all American colleges and high schools, as well as almost all middle schools and many elementary schools. These facilities are utilized for physical education, intramural sports and for interscholastic athletics. In recent years, newer high schools use the terms sportatorium (taken from the name of a few sporting venues in the country) or "multi-purpose room," indicating the gymnasium is used both for sports and non-sporting events.