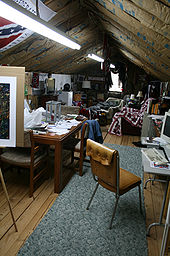 A man cave, sometimes a mantuary[1] or manspace,[2] is a male sanctuary,[3] such as a specially equipped garage,[4] spare bedroom,[3] media room,[5] den,[6] or basement.[6][7] It is not a cave but rather a metaphor describing a room inside the house, such as the basement or garage or attic or office, or outside the house such as a wood shed or tool room, where "guys can do as they please" without fear of upsetting any female sensibility about house decor or design.[8] Paula Aymer of Tufts University calls it the "last bastion of masculinity".[8]

While a wife may have substantial authority over a whole house in terms of design and decoration, she generally has no say about what gets "mounted on the walls" of a man's personal space.[8] Since it may be accepted that a woman has input on the decoration of the rest of the house, a man cave or man space is in some sense a reaction to feminine domestic power.[8] While the term man cave has connotations of retreating to a more primitive primal place, the term man space has been used which does not have the same positive connotations.[8]

Man caves have multiple purposes: they're a place to be alone, to be away from women and from female sensibilities, to indulge in hobbies, and to hang out with male friends. It is, loosely, a male-only space to retreat to,[9] watch sports matches,[10] or play video games.[6] According to psychiatrist and author Scott Haltzman, it is important for a man to have a place to call his own, referring to a male area to which to retreat. Some psychologists claim that a man cave can provide refuge from stressful surroundings and be beneficial to marriage.[1] Rules are relaxed; it is a place where other people's sensibilities about standards of cleanliness are not necessarily observed; as one man said, "You spill a beer there or leave a hamburger overnight, who cares?"[2]

In a sense, for married men, it is a way to recreate some of the space and freedom of their bachelor days since it was like a "pad" similar in feeling to a frat house game room or a college dorm room where people could come and go "as if they owned the place."[2] It is where a man doesn't have to be on his best behavior, where no women are around, and where "no one is going to make you watch your p's and q's" and "no one is going to ask you to explain yourself".[2] Writer and handyman Sam Martin explained:

Martin thinks that any space in the house will do, even a lounge chair and a set of headphones, provided there's an agreement with one's wife or girlfriend that the space is under the control of the man.[11] The advantages of a self-contained room are that male-oriented design choices, such as "tacky lamps" and "beer-can sculptures", are out of sight of women, but in a way that doesn't disturb female sensibilities since visitors generally don't visit the man cave.[11] It's like a firehouse lounge room, but in the home.[12]

According to several sources, the general architectural and design trend is for men to take traditionally male-only spaces, and enhance them with improvements and masculine aesthetic choices. Man caves can be equipped with accessories such as refrigerators,[4][13] vending machines,[5][13] putting greens, kegerators,[3] giant TVs,[3] musical instruments including gear such as microphone stands and amplifiers,[7][8] pool tables, boxing rings,[11] and entertainment centers. A man cave may also be fitted out with a bar and sports memorabilia such as trophies.[8][10]

One man redecorated the space to look like a replica model of the bridge of the Starship Enterprise from the TV show.[11] Upscale sports-themed furnishings are also available to outfit a man cave.[5] These rooms are also often decorated by the male, with little-to-no female influence.[14] A big screen television is useful for watching sports games with buddies.[8] Since it is an area set off from the rest of the house, it's possible to make noise, or yell at the television, without fear of reprisals from a wife, girlfriend or mother.[8]

Garages have typically been a man space since they're often lit by "harsh fluorescent bulbs" and lack heat or air conditioning but nevertheless present a guy with an "opportunity to disappear for hours while never leaving the premises."[2] There are some reports suggesting that some men are likely to "lavish time, money and attention on fixing this spot up".[2] Places in houses which have been typically associated with male-oriented chores, such as garages, basements and tool sheds which haven't been "particularly welcoming spaces" when shared with storage items and garbage, are being fixed up to be more suitable as full-time living spaces, with more thought to design and planning.[11] One man cave of a Gillette corporation executive has a desk, "a chess board that's always set up, never used".[8] But sometimes there are limits; his wife has not yet agreed to letting him smoke cigars in it.[8]

In the book by Sam Martin entitled Manspace: A Primal Guide to Marking Your Territory, the author suggested there were several spots from pop culture: