The Enterprise or USS Enterprise (often referred to as the "Starship Enterprise") is the name of several fictional starships, some of which are the focal point for various television series and films in the Star Trek franchise created by Gene Roddenberry.[1] It is considered a name of legacy in the fleet. The majority of these vessels share "NCC-1701" as part of their registry, with later ships appending a letter to the registry to differentiate them.[1]

The name Enterprise comes from a long series of ships. The first was the French frigate L'Entreprise, captured by the British in 1705. The British rechristened the ship HMS Enterprise for use by the Royal Navy. A further nine Royal Navy commissioned warships carried the name "Enterprise". The first United States ship to use the name USS Enterprise (1775) was a Revolutionary War-era sloop-of-war. The seventh American ship to carry the name, the Yorktown class USS Enterprise (CV-6) is the most decorated ship in the history of the U.S. Navy, and the only Yorktown class aircraft carrier to survive World War II. The eighth American ship to bear this name (CVN-65), was the world's first nuclear aircraft carrier.

According to The Star Trek Encyclopedia, the registry number "NCC-1701" was devised by Matt Jefferies, art director of the first Star Trek series, inspired by an old science fiction cover that Gene Roddenberry liked, with a starship flying through space. Jefferies, who was a pilot, based NCC on 20th century aircraft registration codes. In such 20th century usage, an "N" first letter refers to an aircraft registered in the USA. A "C" for a second letter refers to a civil aircraft. Jefferies added a second "C" because he thought it looked better.[1]

The Franz Joseph Blueprints, the book The Making of Star Trek and a handful of Star Trek novels state that NCC is an initialism for "Naval Construction Contract".

Before Star Trek: The Motion Picture, Paramount had planned a new Star Trek television series to have been named Star Trek: Phase II. Early in the production, Ralph McQuarrie had been hired to redesign the ship. The major feature of the redesign was to replace the cigar-shaped secondary hull with a larger, triangle-shaped section. McQuarrie's design was discarded in favor of keeping the general shape of the ship intact.

Two spaceships with the name Enterprise predate the United Federation of Planets. 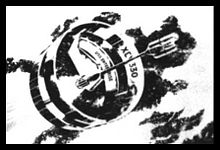 This USS Enterprise (XCV 330) appears in Star Trek: The Motion Picture among a series of illustrations depicting ships named Enterprise. The 1979 Star Trek Spaceflight Chronology describes this "first interstellar liner" as a Declaration-class ship launched in 2123.[2] Its length is given as 300 metres (980 ft), and it has a capacity of 100 crew and 850 passengers.[2] The Star Trek Maps by New Eye Photography Editors, also published in 1979, listed this ship as a Fusion drive probe that was Earth's first attempt to explore another solar system. The Making of Star Trek: The Motion Picture, published in 1980, describes the ship as "the very first starship U.S.S. Enterprise".[3] A painting of this ship hangs on the wall of Earth's 602 Club in flashbacks from the Star Trek: Enterprise episode "First Flight". 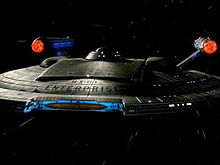 Registry: USS Enterprise (NCC-1701-A)
Class: Constitution refit
Service: 2286–2293
Captain: James T. Kirk (William Shatner)
This ship first appears in "Star Trek IV: The Voyage Home" (1986) and is the main setting in the following Star Trek movies which use the original crew. The ship is ordered decommissioned at the end of The Undiscovered Country.[4] Paperwork included with the model kit indicated the ship was mothballed at the Memory Alpha ship museum, and William Shatner's novel The Ashes of Eden (1996) depicts the Enterprise-A's removal from the mothball fleet before being destroyed defending the planet Chal.

The Next Generation era

Three ships named Enterprise are featured in Star Trek: The Next Generation and four TNG-era films. 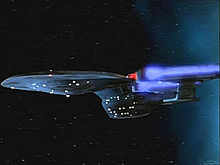 Registry: USS Enterprise (NCC-1701-C)
Class: Ambassador
Service: 2332[6] – 2344
Captains: Rachel Garrett (Tricia O'Neil), Richard Castillo (Christopher McDonald)
This ship appears in the Next Generation episode "Yesterday's Enterprise" (1990).[1] It was destroyed attempting to defend the Klingon outpost Narendra III from Romulan attack.[1] Survivors included Tasha Yar (Denise Crosby), whose alternate timeline version from "Yesterday's Enterprise" travels with the ship back in time to the battle over Narendra III.[1] The actions of the Enterprise-C's crew became a catalyst for the alliance between the Federation and the Klingon Empire.[1]

Registry: USS Enterprise (NCC-1701-D)
Class: Galaxy
Service: 2363–2371
Captains: Jean-Luc Picard (Patrick Stewart), William T. Riker (Jonathan Frakes), Edward Jellico (Ronny Cox)
The main setting of Star Trek: The Next Generation (1987–1994).[1] During Star Trek Generations, the Enterprise was lost in 2371 after an attack by a renegade Klingon Bird-of-Prey (commanded by the Duras sisters) caused extensive damage, leading to a warp core breach. Although the saucer section was safely separated before the breach, the shock wave from the exploding engineering hull threw it out of control, and caused it to crash land on Veridian III.[1] With the engineering hull destroyed and extensive damage to the saucer, the ship was deemed unsalvageable. It is most likely that Starfleet followed the dictates of its prime directive and had the saucer section removed from the surface of Veridian III.[citation needed]

Registry: USS Enterprise (NCC-1701-E)
Class: Sovereign
Service: 2372 – Active (as of 2387)
Captain: Jean-Luc Picard (Patrick Stewart)
The main setting for the films Star Trek: First Contact (1996), Star Trek: Insurrection (1998), and Star Trek Nemesis (2002).[1][7] According to Star Trek: Countdown (2009), Data (in the form of the android B-4) assumed command of the Enterprise after Captain Picard retired from Starfleet to become the Ambassador to Vulcan. 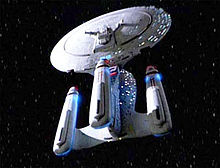 Registry: USS Enterprise (NCC-1701-D)
Class: Galaxy X refit
Service: Unknown-2388-Unknown
Captain: Admiral William T. Riker (Jonathan Frakes)
In "All Good Things...", the final episode of Star Trek: The Next Generation, the Enterprise-D was shown in an alternate future where it had not crashed during the events of Star Trek: Generations, and instead had been made Admiral William T. Riker's personal flagship. The ship has a third nacelle, cloaking ability, and large phaser cannons on the saucer section.

The Mirror Universe first appeared in the original series as reality where a militaristic empire exists in place of the regular universe's United Federation of Planets ("Mirror, Mirror"). Subsequent episodes have shown that the divergence at least predates the Moon landing, with licensed novels putting the divergence before Shakespeare, or even classic Greek literature.

The 2009 Star Trek film takes place in an altered reality created when the Romulan character Nero traveled through time via a black hole. It is also the expected setting of the next film in the series.

Measurements for this version's final size range from 610 meters to 910 meters.[11][12][13][14] In an interview in Cinefex magazine #118, Industrial Light & Magic Art Director Alex Jaeger discussed the design's growth in size during early production of the film, saying "The reconfigured ship was a larger vessel than previous manifestations – approximately 1,200 feet (370 m) long compared to the 947 foot (289 m) ship of the original series. Once we got the ship built and started putting it in environments it felt too small. The shuttle bay gave us a clear relative scale – shuttles initially appeared much bigger than we had imagined – so we bumped up the Enterprise scale, which gave her a grander feel and allowed us to include more detail." A special feature on starships in the Blu-ray Disc (BD) version of the movie gives the length as 2,379 feet (725 m).

As the result of a successful letter writing campaign, NASA named the initial flight-test Space Shuttle Enterprise.[1] In 1994, the real aircraft carrier Enterprise hosted a Star Trek convention, and Star Trek memorabilia can be found throughout the ship.