A fusion rocket is a theoretical design for a rocket driven by fusion power which could provide efficient and long-term acceleration in space without the need to carry a large fuel supply. The design relies on the development of fusion power technology beyond current capabilities, and the construction of rockets much larger and more complex than any current spacecraft. A smaller and lighter fusion reactor might be possible in the future when more sophisticated methods have been devised to control magnetic confinement and prevent plasma instabilities.

For space flight, the main advantage of fusion would be the very high specific impulse, the main disadvantage the (probable) large mass of the reactor. In addition, a fusion rocket may produce less radiation than a fission rocket, reducing the mass needed for shielding. The surest way of building a fusion rocket with current technology is to use hydrogen bombs as proposed in Project Orion, but such a spacecraft would also be massive.

Many spacecraft propulsion methods such as ion thrusters require an input of electric power to run but are highly efficient. In some cases their maximum thrust is limited by the amount of power that can be generated (for example, a mass driver). An electric generator that ran on fusion power could be installed purely to drive such a ship. One disadvantage is that conventional electricity production requires a low-temperature energy sink, which is difficult (i.e. heavy) in a spacecraft. Direct conversion of the kinetic energy of the fusion products into electricity is in principle possible and would mitigate this problem.

An attractive possibility is to simply direct the exhaust of fusion product out the back of the rocket to provide thrust without the intermediate production of electricity. This would be easier with some confinement schemes (e.g. magnetic mirrors) than with others (e.g. tokamaks). It is also more attractive for "advanced fuels" (see aneutronic fusion). Helium-3 propulsion is a proposed method of spacecraft propulsion that uses the fusion of helium-3 atoms as a power source. Helium-3, an isotope of helium with two protons and one neutron, could be fused with deuterium in a reactor. The resulting energy release could be used to expel propellant out the back of the spacecraft. Helium-3 is proposed as a power source for spacecraft mainly because of its abundance on the moon. Currently, scientists estimate that there are 1 million tons of helium-3 present on the moon, mainly due to solar wind colliding with the moon's surface and depositing it, among other elements, into the soil.[1] Only 20% of the power produced by the D-T reaction could be used this way; the other 80% is released in the form of neutrons which, because they cannot be directed by magnetic fields or solid walls, would be very difficult to use for thrust. Helium-3 is also produced via beta decay of tritium, which in turn can be produced from deuterium, lithium, or boron.

Even if a self-sustaining fusion reaction cannot be produced, it might be possible to use fusion to boost the efficiency of another propulsion system, such as a VASIMR engine. 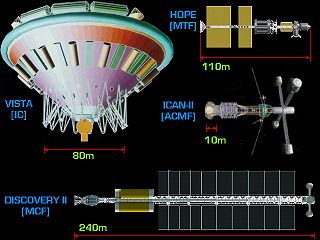 To sustain a fusion reaction, the plasma must be confined. The most widely studied configuration for terrestrial fusion is the tokamak, a form of magnetic confinement fusion. Currently tokamaks weigh a great deal, so the thrust to weight ratio would seem unacceptable. NASA's Glenn Research Center has proposed a small aspect ratio spherical torus reactor for its "Discovery II" conceptual vehicle design. "Discovery II" could deliver a manned 172 000-kilogram payload to Jupiter in 118 days (or 212 days to Saturn) using 861 metric tons of hydrogen propellant, plus 11 metric tons of Helium-3-Deuterium (D-He3) fusion fuel.[2] The hydrogen is heated by the fusion plasma debris to increase thrust, at a cost of reduced exhaust velocity (348–463 km/s) and hence increased propellant mass.

The main alternative to magnetic confinement is inertial confinement fusion, such as that proposed by Project Daedalus. A small pellet of fusion fuel (with a diameter of a couple of millimeters) would be ignited by an electron beam or a laser. To produce direct thrust, a magnetic field would form the pusher plate. In principle, the Helium-3 - Deuterium reaction or an aneutronic fusion reaction could be used to maximize the energy in charged particles and to minimize radiation, but it is highly questionable whether it is technically feasible to use these reactions. Both the detailed design studies in the 1970s, the Orion drive and Project Daedalus, used inertial confinement. In the 1980s, Lawrence Livermore National Laboratory and NASA studied an ICF-powered "Vehicle for Interplanetary Transport Applications" (VISTA). The conical VISTA spacecraft could deliver a 100-tonne payload to Mars orbit and return to Earth in 130 days, or to Jupiter orbit and back in 403 days. 41 tonnes of deuterium/tritium (D-T) fusion fuel would be required, plus 4124 tonnes of hydrogen expellant[3]. The exhaust velocity would be 157km/s.

Magnetized target fusion (MTF) is a relatively new approach that combines the best features of the more widely studied magnetic confinement fusion (i.e. good energy confinement) and inertial confinement fusion (i.e. efficient compression heating and wall free containment of the fusing plasma) approaches. Like the magnetic approach, the fusion fuel is confined at low density by magnetic fields while it is heated into a plasma, but like the inertial confinement approach, fusion is initiated by rapidly squeezing the target to dramatically increase fuel density, and thus temperature. MTF uses "plasma guns" (i.e. electromagnetic acceleration techniques) instead of powerful lasers, leading to low cost and low weight compact reactors.[4] The NASA/MSFC Human Outer Planets Exploration (HOPE) group has investigated a manned MTF propulsion spacecraft capable of delivering a 163 933-kilogram payload to Jupiter's moon Callisto using 106-165 metric tons of propellant (hydrogen plus either D-T or D-He3 fusion fuel) in 249–330 days.[5] This design would thus be considerably smaller and more fuel efficient due to its higher exhaust velocity (Isp=700 km/s) than the previously mentioned "Discovery II", "VISTA" concepts.

A popular confinement concept for fusion rockets is inertial electrostatic confinement, such as in the Farnsworth-Hirsch Fusor or the Polywell variation being researched by the Energy-Matter Conversion Corporation. Dr. Robert Bussard published a series of technical articles discussing its application to spaceflight throughout the 1990s. His work was popularised by an article [1] in the Analog Science Fiction and Fact publication, where Tom Ligon (who has also written several science fiction stories) described how the fusor would make for a highly effective fusion rocket. It was also featured in this role in the science fiction novel The Wreck of the River of Stars, by Michael Flynn. However, there are theoretical difficulties with the concept, related to energy losses via bremsstrahlung radiation and maintaining a highly non-Maxwellian ion energy distribution.

A still more speculative concept is antimatter catalyzed nuclear pulse propulsion, which would use tiny quantities of antimatter to catalyze a fission and fusion reaction, allowing much smaller fusion explosions to be created.