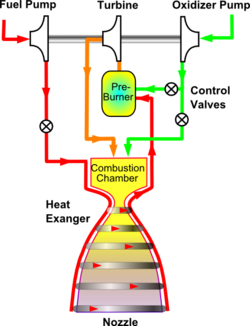 Staged combustion rocket cycle. Usually, all of the fuel and a portion of the oxidizer are fed through the pre-burner (fuel rich) to power the pumps. An oxygen rich circuit is possible also, but less common because of the metallurgy required.

The disadvantages of this cycle are harsh turbine conditions, that more exotic plumbing is required to carry the hot gases, and that a very complicated feedback and control design is necessary. In particular, running the full oxidizer stream through both a pre-combustor and main-combustor chamber (oxidizer-rich staged combustion) produces extremely corrosive gases. Thus most staged-combustion engines are fuel-rich, as in the schematic.

Staged combustion engines are the most difficult types of rocket engines to design. A simplified version is called the gas-generator cycle.

Staged combustion (Замкнутая схема) was first proposed by Alexey Isaev in 1949. The first staged combustion engine was the S1.5400 (11D33) used in the Soviet planetary rocket, designed by Melnikov, a former assistant to Isaev.[2] About the same time (1959), Nikolai Kuznetsov began work on the closed cycle engine NK-9 for Korolev's orbital ICBM, GR-1. Kuznetsov later evolved that design into the NK-15 and NK-33 engines for the unsuccessful Lunar N1 rocket. The non-cryogenic N2O4/UDMH engine RD-253 using staged combustion were developed by Valentin Glushko around 1963 for the Proton rocket.

After the failure of the N-1, Kuznetsov had been ordered to destroy the NK-33 technology, but instead he warehoused dozens of the engines. In the 1990s, Aerojet was contacted and eventually visited Kuznetsov's plant. Upon meeting initial skepticism about the high specific impulse and other specifications, Kuznetsov shipped an engine to the US for testing. Oxidizer-rich staged combustion had been considered by American engineers, but deemed impossible.[3] The Russian RD-180 engine, purchased by Lockheed Martin (subsequently by United Launch Alliance) for the Atlas III and V rockets, also employs this technique.

In the West, the first laboratory staged-combustion test engine was built in Germany in 1963, by Ludwig Boelkow.

Hydrogen peroxide/kerosene fuelled engines such as the British Gamma of the 1950s may use a closed-cycle process (arguably not staged combustion, but that's mostly a question of semantics) by catalytically decomposing the peroxide to drive turbines before combustion with the kerosene in the combustion chamber proper. This gives the efficiency advantages of staged combustion, whilst avoiding the major engineering problems.

The Space shuttle main engine is another example of a staged combustion engine, and the first to use liquid oxygen and liquid hydrogen. Its counterpart in the Soviet shuttle was the RD-0120, similar in specific impulse, thrust, and chamber pressure specification to the SSME, but with some differences that reduced complexity and cost at the expense of increased engine weight. 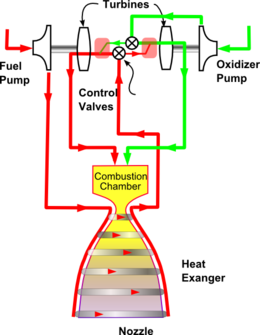 The turbines run cooler in this design since more mass passes through them, leading to a longer engine life and higher reliability. The design can provide higher chamber pressures and therefore greater efficiency. An intrapropellant turbine seal is also eliminated. Full gasification of components leads to faster chemical reactions in the combustion chamber and, as compared to the partial staged combustion cycle, it results in an increase of specific impulse up to 10–20 seconds (e.g., RD-270 and RD-0244).

A current version under development is the integrated powerhead demonstrator. This scheme was applied in the Russian experimental RD-270 engine in the late 1960s, which was designed for several Soviet lunar rockets.

Staged combustion engines include the following:

Staged combustion engines have been used in: