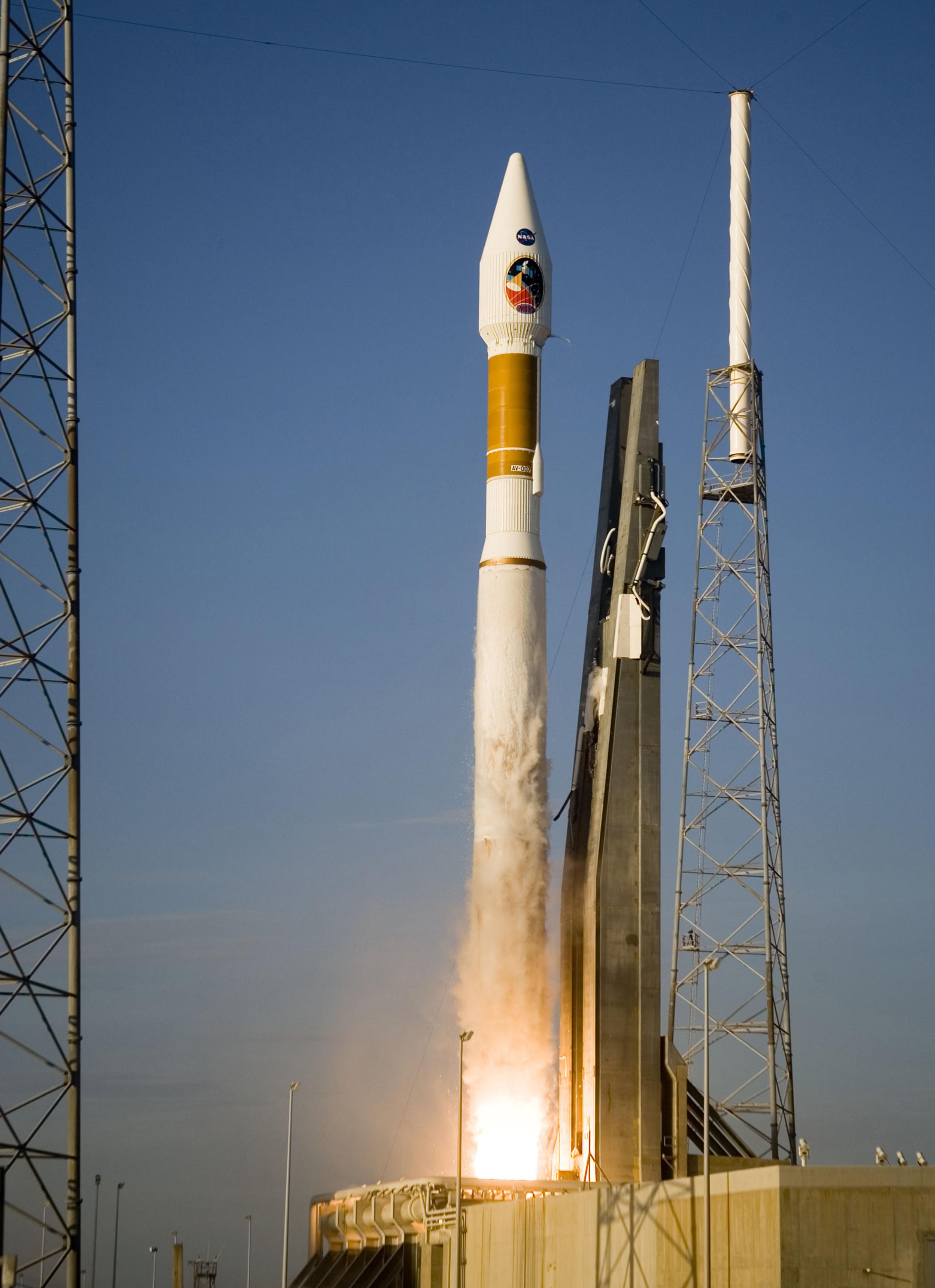 In its 12 launches, from its maiden launch in August 2002 to March 2008, the Atlas V has had a near-perfect success rate. On one flight, NRO L-30 on , , an upper-stage anomaly occurred when the engine in the vehicle's Centaur upper stage shut down early, leaving the payload—a pair of ocean s—in a lower than intended orbit. [cite web |url=http://www.aviationweek.com/aw/generic/story_channel.jsp?channel=defense&id=news/NRO062207.xml |title=NRO Shortfall May Delay Upcoming ULA Missions |publisher=Aviation Week] However, the customer, the , categorized the mission as a success.fact |date=March 2008 The anomaly was thoroughly investigated.fact |date=March 2008 Atlas V has made four successful flights since the anomaly.

The Atlas V is the newest member of the Atlas family, and is a direct descendant of the previous and especially the vehicles. Most propulsion, avionic and structural elements are either identical to or straightforward derivations of those used on the previous vehicles.

The most obvious external change is to the first stage tanks, which no longer use 10-foot-diameter, stainless steel monocoque, common intermediate bulkhead "balloon" construction nor the '1.5 staging' technique which jettisoned two engines in mid-flight but left a third burning all the way from the ground to orbit, but instead use a 12.5-foot-diameter welded aluminum alloy construction first stage much like that of the Titan family of vehicles or the .

The Atlas V was developed by Lockheed Martin Commercial Launch Services as part of the US Air Force Evolved Expendable Launch Vehicle (EELV) program. The term "expendable launch vehicle" means it is only used once. Launches are from Space Launch Complex 41 at . In addition, Space Launch Complex 3 East at is being prepared for future polar launches.

The first Atlas V was launched on , . Twelve Atlas V launches to date have been successful except for the 2007 anomaly. The Atlas V family uses a single-stage Atlas main engine, the Russian and the newly developed (CCB) with up to five made strap-on s. The CCB is 12.5 ft (3.8 m) in diameter by 106.6 ft (32.5 m) long and uses 627,105 lb (284,450 kg) of liquid oxygen and rocket fuel propellants. The booster operates for about four minutes, providing about 4 meganewtons (860,000 lbf) of thrust at start, the major part of this thrust, 4.152 meganewtons being provided by Russian RD-180 engine.

The Centaur upper stage uses a pressure stabilized propellant tank design and cryogenic propellants. The Centaur stage for Atlas V is stretched 5.5 ft (1.68 m) and is powered by either one or two RL10A-4-2 engines, each engine developing a thrust of 99.2 kN (22,300 lbf). Operational and reliability upgrades are enabled with the RL10A-4-2 engine configuration. The (INU) located on the Centaur provides guidance and navigation for both Atlas and Centaur, and controls both Atlas and Centaur tank pressures and propellant use. The Centaur engines are capable of multiple in-space starts, making possible insertion into low-earth parking orbit, followed by a coast period and then insertion into GTO. A subsequent third burn following a multi-hour coast can permit direct injection of payloads into geostationary orbit. The Centaur vehicle has the highest proportion of burnable propellant relative to total mass of any modern upper stage and hence can deliver substantial payloads to a high energy state.

Many systems on the Atlas V have been the subject of upgrade and enhancement both prior to the first Atlas V flight and since that time. An upgrade to a Fault Tolerant INU (FTINU) was recently made to enhance mission reliability for Atlas vehicles.

The only anomalous event in the use of the Atlas V launch system occurred , , when the engine in the Centaur upper stage of an Atlas V shut down early, leaving its payloadndash a pair of NRO L-30 ocean sndash in a lower than intended orbit. [cite web |url=http://www.aviationweek.com/aw/generic/story_channel.jsp?channel=defense&id=news/NRO062207.xml |title=NRO Shortfall May Delay Upcoming ULA Missions |publisher=Aviation Week] The cause of the anomaly was traced to a leaky valve. Replacing the valve led to a delay in an upcoming Atlas V launch.

The Atlas V-Heavy or HLV configuration is available 30 months from order. [http://www.globalsecurity.org/space/systems/atlas-v.htm Atlas V EELV - Lockheed-Martin Retrieved on ] It would use three CCB stages strapped together to provide the capability necessary to lift the heaviest spacecraft. Approximately 95% of the hardware required for the Atlas HLV has already been flown on the Atlas V single core vehicles.

The Atlas V has two general sizes. The classic 4-meter fairing, used since the , comes in regular and slightly stretched versions (see AV-004/Inmarsat 4-F1 launch), and Lockheed Martin introduced a 5-meter (4.57 meters usable) payload fairing developed and built by Contraves Space (now Oerlikon Space [http://www.oerlikon.com/space/] ) in . The Contraves fairing is a composite design and is based on flight proven hardware. Three configurations will be manufactured to support Atlas V. The short and medium length configurations will be used on the Atlas V 500 series. The long configuration will be used on the Atlas V-Heavy. The classic fairing covers only the payload, leaving the Centaur stage exposed to open air. With the Contraves fairing, the Centaur is enclosed within the fairing as well as the payload.

Each Atlas booster has a three-digit version designation that is determined by the features of the rocket. The first digit is the diameter (in meters) of the nosecone fairing, and is always either '4' or '5'. The second digit is the number of solid rocket boosters attached to the base of the rocket, and can number anywhere from '0' through '3' with the 4-m fairing and '0' through '5' with the 5-m fairing. The third digit is the number of engines on the Centaur stage, either '1' or '2'. Single-engine Centaurs (SEC) are typically used for satellites going to or reaching . Dual-engine Centaurs (DEC) are typically used for satellites reaching .

For example, if the Atlas V version is "552", this means that the fairing is five meters, has five solid rocket boosters, and has two Centaur engines.

If the Atlas V version is "431", this means that the fairing is four meters, has three solid rocket boosters, and has a single Centaur engine.

An agreement between Lockheed and in September 2006 could lead to a
human-rated version of the Atlas V to tap into the potential market. [cite news
last=Gaskill
first=Braddock
title=Human Rated Atlas V for Bigelow Space Station details emerge
publisher=NASASpaceflight.com
date=2007-01-31
url=http://www.nasaspaceflight.com/content/?cid=5008 ]