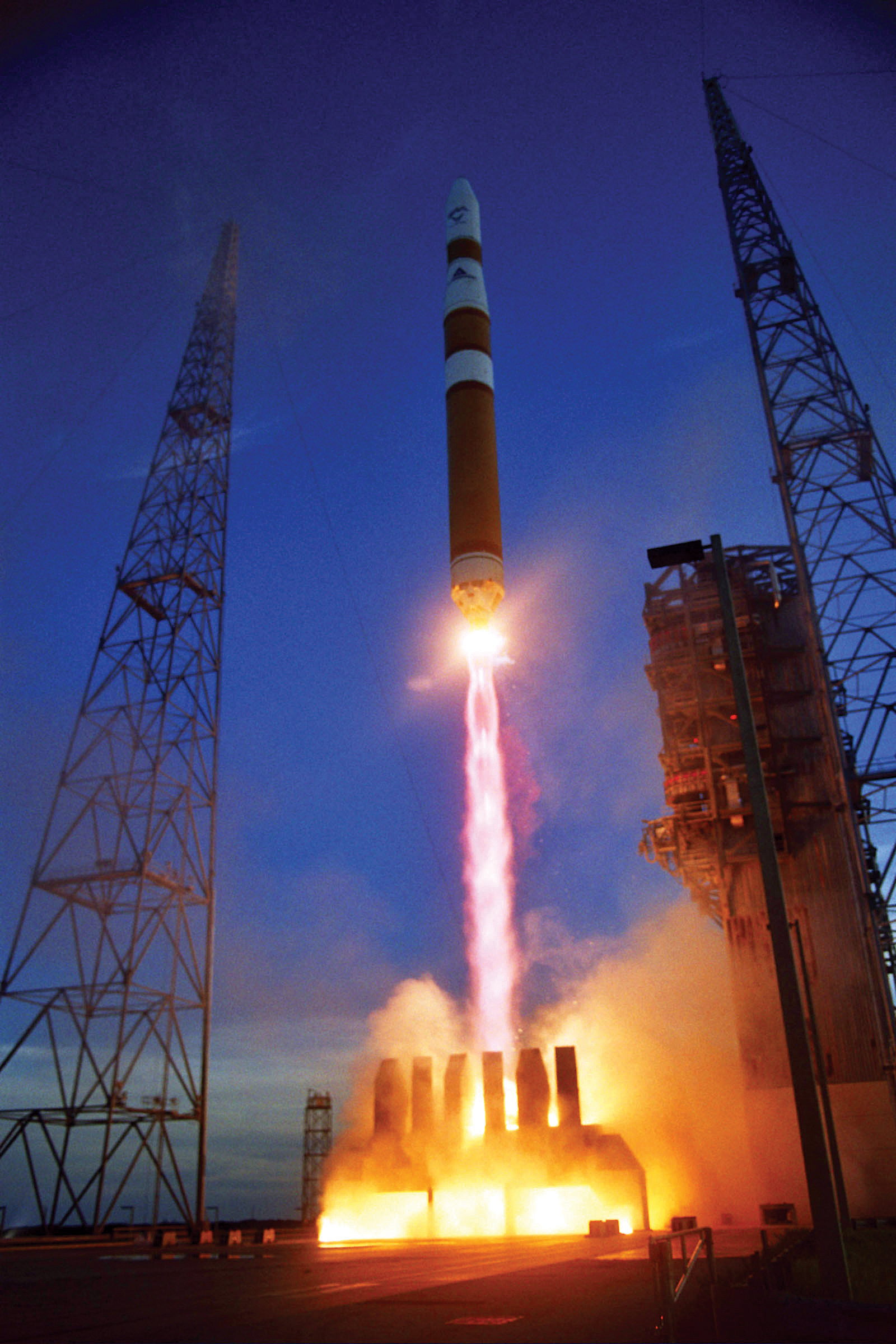 The Delta IV is a family of Delta s designed by 's Integrated Defense Systems division and built in United Launch Alliance's facility in with final assembly at the launch site by . [ [http://www.comspacewatch.com/news/viewpr.html?pid=21394 United Launch Alliance Transaction completed] ] The rockets were designed for the United States Air Force (EELV) program and commercial satellite business, and are intended to reduce the cost and effort needed to launch payloads into orbit. The Delta IV is available in five versions: Medium, Medium+ (4,2), Medium+ (5,2), Medium+ (5,4), and Heavy, which are tailored to suit specific payload size and weight ranges. The Delta IV is primarily designed to satisfy the needs of the U.S. military.

The rockets are assembled at the and launched from LC-37B at Cape Canaveral, and at .

The first stage of a Delta IV consists of one, or in the Heavy variety three, Common Booster Cores (CBC) powered by a RS-68 engine. Unlike most first-stage rocket engines, which use solid fuel or , the RS-68 engines burn and .

The RS-68 is the first large, liquid-fueled rocket engine designed in the U.S. since the Space Shuttle Main Engine (SSME) in the 1970s. The primary goal for the RS-68 was to reduce cost versus the SSME. Some sacrifice in chamber pressure and was made, hurting efficiency; however, development time, part count, total cost, and assembly labor were reduced to a fraction of the SSME, despite the RS-68's significantly larger size. Typically, the RS-68 runs at 102% rated thrust for the first few minutes of flight, and then throttles down to 58% rated thrust before main engine cutoff. [ [http://www.spaceflightnow.com/delta/d313/050609launchtimeline.html Delta IV GOES-N Launch Timeline] ] On the Heavy variant, the core CBC's engine throttles down to 58% rated thrust around 50 seconds after liftoff, while the strap-on CBCs remain at 102%. This allows the core CBC to conserve propellant and burn longer. After the strap-on CBCs separate, the core CBC's engine throttles back up to 102%, until main engine cutoff, before which it throttles back down to 58%. [ [http://www.spaceflightnow.com/delta/d310/041201launchtimeline.html Delta IV Heavy Demo Launch Timeline] ]

The RS-68 engine is mounted to the lower thrust structure of the vehicle by a four-legged (quadrapod) thrust frame, and enclosed in a protective composite conical thermal shield. Above the thrust structure is an (a grid pattern machined out of the inside of the tank to reduce weight) liquid hydrogen tank, followed by a cylinder called the centerbody, an aluminum isogrid liquid oxygen tank, and a forward skirt. Along the back of the CBC is a cable tunnel to hold electrical and signal lines, and a tube to carry the liquid oxygen to the RS-68 from the tank. The CBC is of a constant, 5-meter, diameter.

The Redundant Inertial Flight Control Assembly (RIFCA) guidance system used on the Delta IV is common to that carried on the Delta II, although the software is different because of the differences between the Delta II and Delta IV. The RIFCA features six ring s and s each, to provide a higher degree of reliability. [ [http://www.l-3com.com/spacenav/space_and_nav/space_products/RIFCA-Trihex.htm L-3 Space & Navigation's RIFCA Trihex] ]

The Delta IV entered the space launch market at a period when global capacity was already much higher than demand. Furthermore, as an unproven design it has had difficulty finding a market in commercial launches, and the cost to launch a Delta IV is somewhat higher than that for competing vehicles. In 2003, Boeing pulled the Delta IV from the commercial market, citing low demand and high costs. In 2005, Boeing stated that it may return the Delta IV to commercial service; however as of 2006 no further announcements have been made regarding this. [ [http://www.ocregister.com/ocr/2005/03/25/sections/business/business_nation/article_456341.php Delta IV may return to commercial launches] ] All but one of the first launches have been paid for by the U.S. Government, with a cost of between $140 million and $170 million.

The Delta IV Medium (Delta 9040) is the most basic Delta IV. It features a single CBC and a modified Delta III second stage, with 4-meter liquid hydrogen and liquid oxygen tanks and a 4-meter payload fairing derived from the Delta III fairing. The Delta IV Medium is capable of launching 4,210 kg (9,285 lb) to (GTO).

The Delta IV Heavy (Delta 9250H) is similar to the Medium+ (5,2), except that it uses two additional CBCs instead of using GEMs. These are strap-on boosters which are separated earlier in the flight than the center CBC. The Delta IV Heavy also features a stretched 5-meter composite payload fairing.

During the Delta IV's development, a Small variant was considered. This would have featured the second stage, an optional Star 48B third stage, and the Delta II payload fairing, all atop a single CBC. [ [http://www.astronautix.com/lvs/delsmall.htm Delta IV Small on Astronautix.com] ] The Small variant was dropped by 1999. [ [http://www.skyrocket.de/space/doc_lau/delta-4.htm Gunter's Space page - Delta IV] ] [ [http://www.boeing.com/defense-space/space/delta/news/1999/news_release_990128b.html Boeing Signs agreement for Delta IV Integration Facility] ] This was probably because the Delta II has a similar payload capability.

Possible future upgrades for the Delta IV include adding extra strap-on solid motors to boost capacity, higher-thrust main engines, lighter materials, higher-thrust second stages, more (up to six) strap-on CBCs, and a cryogenic propellant cross feed from strap on boosters to the common core. These modifications could potentially increase the mass of the payload delivered to LEO to 100 tonnes.

NASA originally had plans to use the Delta IV Heavy for the , the replacement for the Space Shuttle. But with the change of the CEV from a winged or lifting body spacecraft to an Apollo-like capsule and a new launch vehicle based on Space Shuttle components, the only component from the Delta IV that NASA would adopt is the RS-68 engine that would be used to power the new cryogenically-fueled rocket.

The possibility of an extra-heavy variant was indicated in a 2006 RAND Corporation study of national security launch requirements out to 2020, [ [http://www.rand.org/pubs/monographs/2006/RAND_MG503.pdf National Security Space Launch Report] ] which noted, "...only the Delta IV Heavy has the performance to lift the ten NSS launch requirements that require a heavy-lift capability... the production capacity for Delta IV, with one possible exception, can satisfy the entire projected NSS launch demand. The exception involves the requirement to increase the Delta IV Heavy lift capability to accommodate a single NRO () payload. The best solution to this requirement is currently under study."

Delta IV launches occur from either of two s. On the East coast of the United States, Launch Complex 37 (LC-37) at the ndash site of several unmanned and -IB launchesndash is used. On the West coast, polar-orbit and high-inclination launches use 's Space Launch Complex 6 (SLC-6) pad. This pad was originally intended for the cancelled Air Force MOL space station, and later for polar orbit flights, but neither were ever actually launched from SLC-6.

Launch facilities at both sites are similar. At the pad is a Mobile Service Tower (MST), which provides service access to the rocket and protection from the weather. There is a crane at the top of the MST, which allows the payload and GEM-60 solid motors to be attached to the vehicle. The MST is rolled away from the rocket several hours before launch. At Vandenberg, the launch pad also has a Mobile Assembly Shelter (MAS), which completely encloses the vehicle; at CCAFS, the vehicle is partly exposed near its bottom.

Beside the vehicle is a Fixed Umbilical Tower (FUT), which has two (VAFB) or three (CCAFS) swing arms. These arms carry electrical, , environmental control, and other support functions to the vehicle through umbilical lines. The swing arms retract at T-0 seconds to prevent them from hitting the vehicle.

The Horizontal Integration Facility (HIF) is situated some distance from the pad. It is a large building that allows the Delta IV CBCs and second stages to be mated and tested before they are moved to the pad.

Movement of the Delta IVs among the various facilities at the pad is facilitated by Elevating Platform Transporters (EPTs). These rubber-tired vehicles can be powered by either diesel engines or electric power. Diesel EPTs are used for moving the vehicles from the HIF to the pad, while electric EPTs are used in the HIF, where precision of movement is important. [ [http://www.boeing.com/defense-space/space/delta/flo_facilities_delta_IV.htm Delta IV Launch Facilities] ]

The Delta IVs are assembled using a process that Boeing claims reduces cost and expensive on-pad time. The CBCs are built in Boeing's factory in Decatur, Alabama. They are then loaded onto the M/V "Delta Mariner", a cargo vessel, and shipped to either launch pad. There, they are offloaded and rolled into a (HIF), where they are mated with the second stages, which were shipped separately to the pad on the "Delta Mariner". Also, in the HIF, the three CBCs of Heavy variant are mated to each other.

Various tests are performed, and then the vehicle is rolled horizontally to the pad, where the Fixed Pad Erector (FPE) is used to raise the vehicle to the vertical position, inside the MST. At this time, the GEM-60 solid motors, if any are required, are rolled to the pad and attached to the vehicle. After further testing, the payload (which has already been enclosed in its fairing) is transported to the pad, hoisted into the MST by a crane, and attached to the vehicle. Finally, on launch day, the MST is rolled away from the vehicle, and the vehicle is ready for launch. [ [http://www.spaceflightnow.com/delta/d310/041201prelaunch.html Delta IV prelaunch assembly] ]

Although Boeing claims cost effective reductions on Boeing Launch Services of Huntington Beach, Calif., is being awarded a contract modification for $287,997,350. The purpose of this modification is to modify the scope of undefinitized contract action (UCA) P00011 of contract FA8816-06-C-0001, by adding an additional 4 months. This increase in scope will result in an increase of $287,997,013. As a result of this change the NTE amount is increased from $294,300,000 to $582,297,350. This action is necessary to maintain uninterrupted support of the Delta IV Evolved Expendable Launch Vehicle Capability contract. [http://www.militaryindustrialcomplex.com/contract_detail.asp?contract_id=3793]

On , the Air Force modified a cost plus award fee contract with the Boeing Launch Services for $1,655,545,303. This action included in the face vale of this action is the previously disclosed NTE in the amount of $582,297,350 and an additional $516,147,820 to extend the period of performance to maintain critical engineering and integration skills and the infrastructure necessary to support the Delta IV Program and the United States space assets through the end of FY09. In addition this action has added an option for FY10 in the amount of $557,100,133 for continuation of the same effort. [http://www.militaryindustrialcomplex.com/contract_detail.asp?contract_id=5368] [http://www.defensedaily.com/contracts.html]

"Heavy Demo" was the first launch of the Heavy variant in Dec. 2004 after significant delays due to bad weather. Due to in the propellant lines, sensors registered depletion of propellant. The strap-on, and later core CBC engines shut down prematurely, even though sufficient propellant remained to continue the burn as scheduled. The second stage attempted to compensate for the under-burn, until it ran out of propellant. This flight was a test launch carrying a payload consisting of:
*"DemoSat"ndash 6020 kg; an aluminum cylinder filled with 60 brass rodsndash planned to be carried to GEO; however due to the sensor faults, the satellite did not reach this orbit.
*"NanoSat-2", carried to (LEO)ndash a set of two very small satellites of 24 and 21 kg, nicknamed "Sparky" and "Ralphie"ndash planned to orbit for one day. Given the under-burn, the two most likely did not reach a stable orbit. [ [http://spaceflightnow.com/delta/d4h.html Spaceflight Now | Delta 4-Heavy mission report ] ]

*"DSP-23" was the first launch of a valuable payload aboard a Heavy vehicle. This was also be the first Delta IV launch contracted by the , a joint venture between and . The main payload was the 23rd and final missile-warning satellite, DSP-23. Launch, from Cape Canaveral occurred at 01:50:00 GMT on (8:50 EST, , ). [cite web |url=http://www.spaceflightnow.com/delta/d329/index.html |title=Delta 4-Heavy rocket fires away from Cape Canaveral |accessdate=2008-05-28 |author=Justin Ray |date=2007-11-11 |work=Spaceflight Now (http://www.spaceflightnow.com) |publisher=]

*"NROL-26" will carry a classified U.S. NRO satellite on a Heavy. Launch date as of is scheduled for .

* The "GOES-O" mission will carry a weather satellite for NOAA and on a Medium+ (4,2) from Cape Canaveral. Launch date as of is scheduled for .