The Atkinson cycle engine is a type of internal combustion engine invented by James Atkinson in 1882. The Atkinson cycle is designed to provide efficiency at the expense of power density, and is used in some modern hybrid electric applications.

The original Atkinson cycle piston engine allowed the intake, compression, power, and exhaust strokes of the four-stroke cycle to occur in a single turn of the crankshaft and was designed to avoid infringing certain patents covering Otto cycle engines.[1] Due to the unique crankshaft design of the Atkinson, its expansion ratio can differ from its compression ratio and, with a power stroke longer than its compression stroke, the engine can achieve greater thermal efficiency than a traditional piston engine. While Atkinson's original design is no more than an historical curiosity, many modern engines use unconventional valve timing to produce the effect of a shorter compression stroke/longer power stroke, thus realizing the fuel economy improvements the Atkinson cycle can provide.[2] 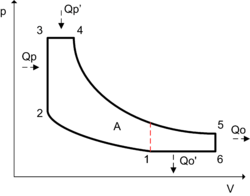 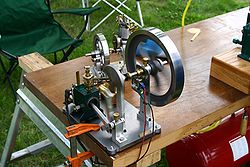 A small engine with Atkinson-style linkages between the piston and flywheel. Modern Atkinson cycle engines do away with this complex energy path.

Recently Atkinson cycle has been used to describe a modified Otto cycle engine in which the intake valve is held open longer than normal to allow a reverse flow of intake air into the intake manifold. The effective compression ratio is reduced (for a time the air is escaping the cylinder freely rather than being compressed) but the expansion ratio is unchanged. This means the compression ratio is smaller than the expansion ratio. Heat gained from burning fuel increases the pressure, thereby forcing the piston to move, expanding the air volume beyond the volume when compression began. The goal of the modern Atkinson cycle is to allow the pressure in the combustion chamber at the end of the power stroke to be equal to atmospheric pressure; when this occurs, all the available energy has been obtained from the combustion process. For any given portion of air, the greater expansion ratio allows more energy to be converted from heat to useful mechanical energy meaning the engine is more efficient.

Four-stroke engines of this type with this same type of intake valve motion but with a supercharger to make up for the loss of power density are known as Miller cycle engines.

The Atkinson cycle can be used in a rotary engine. In this configuration an increase in both power and efficiency can be achieved when compared to the Otto cycle. This type of engine retains the one power phase per revolution, together with the different compression and expansion volumes of the original Atkinson cycle. Exhaust gases are expelled from the engine by compressed-air scavenging. This modification of the Atkinson cycle allows for the use of alternative fuels like diesel and hydrogen. Disadvantages of this design include the requirement that rotor tips seal very tightly on the outer housing wall and the mechanical losses suffered through friction between rapidly oscillating parts of irregular shape. See External Links for more information.

2009 Ford Fusion Hybrid, as sold in the United States. Unrelated to the European car of the same name.

While a modified Otto cycle engine using the Atkinson cycle provides good fuel economy, it is at the expense of a lower power-per-displacement as compared to a traditional four-stroke engine.[3] If demand for more power is intermittent, the power of the engine can be supplemented by an electric motor during times when more power is needed. This forms the basis of an Atkinson cycle-based hybrid electric drivetrain. These electric motors can be used independently of, or in combination with, the Atkinson cycle engine, to provide the most efficient means of producing the desired power.