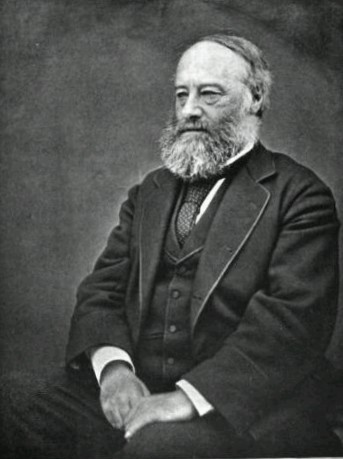 James Prescott Joule FRS (pronEng|ˈdʒuːl; [: "Although some people of this name call themselves IPA|(dʒaʊl), and others IPA|(dʒəʊl) […] , it is almost certain that J. P. Joule (and at least some of his relatives) used IPA|(dʒuːl).] , &ndash; , ) was an English and brewer, born in , . Joule studied the nature of , and discovered its relationship to (see ). This led to the theory of , which led to the development of the . The of energy, the , is named after him. He worked with Lord Kelvin to develop the absolute scale of , made observations on , and found the relationship between the current through a resistance and the heat dissipated, now called .

The son of Benjamin Joule (1784&ndash;1858), who was a wealthy brewer, Joule was tutored at home until 1834 when he was sent, with his elder brother Benjamin, to study with John Dalton at the . The pair only received two years' education in and before Dalton was forced to retire owing to a . However, Dalton's influence made a lasting impression as did that of his associates, William Henry and Manchester engineers and . Joule was subsequently tutored by John Davies. Joule was fascinated by . He and his brother experimented by giving electric shocks to each other and to the family's servants.

Joule became a manager of the brewery and took an active role until the sale of the business in 1854. Science was a hobby but he soon started to investigate the feasibility of replacing the brewery's s with the newly-invented . In 1838, his first s on electricity were contributed to "Annals of Electricity", the founded and operated by Davies's colleague . He discovered in 1840 [Joule, J.P. (1841) "On the heat evolved by metallic conductors of electricity" "Philosophical Magazine", 19, 260; "Scientific Papers" 65] and hoped to impress the but found, not for the last time, that he was perceived as a mere provincial dilettante. When Sturgeon moved to Manchester in 1840, Joule and he became the nucleus of a circle of the city's intellectuals. The pair shared similar sympathies that science and theology could and should be integrated. Joule went on to lecture at Sturgeon's .

He went on to realise that burning a pound of coal in a steam engine produced five times as much duty as a pound of consumed in a , [ was to give one of the earliest general accounts of the conservation of energy in 1844.] an early electric battery. [Smith (1998) "p."60] Joule's common standard of "economical duty" was the ability to raise one pound, a height of one foot, the "foot-pound". [Joule's unit of the foot-pound corresponds to a modern measure of . The energy required to raise a mass, "m", through a height "h" is "mgh", where "g" is the . Joule's unit is dimensionally correct if interpreted as . Where are employed, such energy is given in terms of the eponymous : 1 foot-pound = 1.356 J.]

Joule was influenced by the thinking of and tried to explain the phenomena of electricity and in terms of s surrounded by a " ether in a state of vibration".

However, Joule's interest diverted from the narrow financial question to that of how much work could be extracted from a given source, leading him to speculate about the convertibility of . In 1843 he published results of experiments showing that the ing effect he had quantified in 1841 was due to generation of heat in the conductor and not its transfer from another part of the equipment. [Joule, J.P. (1843) "Philosophical Magazine", 23, 263; "Scientific Papers" 123] This was a direct challenge to the which held that heat could neither be created or destroyed. Caloric theory had dominated thinking in the science of heat since it was introduced by in 1783. Lavoisier's prestige and the practical success of Sadi Carnot's caloric theory of the since 1824 ensured that the young Joule, working outside either or the engineering profession, had a difficult road ahead. Supporters of the caloric theory readily pointed to the symmetry of the to claim that heat and current were convertible, at least approximately, by a .

The mechanical equivalent of heat

Joule here adopts the language of "vis viva" (energy), possibly because Hodgkinson had read a review of Ewart's "On the measure of moving force" to the Literary and Philosophical Society in April 1844.

Joule was undaunted and started to seek a purely mechanical demonstration of the conversion of work into heat. By forcing water through a perforated cylinder, he was able to measure the slight viscous heating of the fluid. He obtained a mechanical equivalent of 770 ft·lbf/Btu (4.14 J/cal). The fact that the values obtained both by electrical and purely mechanical means were in agreement to at least one was, to Joule, compelling evidence of the reality of the convertibility of work into heat.

Joule now tried a third route. He measured the heat generated against the work done in compressing a gas. He obtained a mechanical equivalent of 823 ft·lbf/Btu (4.43 J/cal). [Joule, J.P. (1845) "On the rarefaction and condensation of air" "Philosophical Magazine", "Scientific Papers" 172] In many ways, this experiment offered the easiest target for Joule's critics but Joule disposed of the anticipated objections by clever experimentation. However, his paper was rejected by the and he had to be content with publishing in the "". In the paper he was forthright in his rejection of the caloric reasoning of Carnot and , but his theological motivations also became evident:

In 1845, Joule read his paper "On the mechanical equivalent of heat" to the British Association meeting in . [ [http://dbhs.wvusd.k12.ca.us/webdocs/Chem-History/Joule-Heat-1845.html Joule, J.P. (1845) "On the Mechanical Equivalent of Heat"] , "Brit. Assoc. Rep., trans. Chemical Sect", p.31, read before the British Association at Cambridge, June] In this work, he reported his best-known experiment, involving the use of a falling weight to spin a paddle-wheel in an insulated barrel of water, whose increased temperature he measured. He now estimated a mechanical equivalent of 819 ft·lbf/Btu (4.41 J/cal).

:"For the controversy over priority with Mayer, see "

Much of the initial resistance to Joule's work stemmed from its dependence upon extremely precise s. He claimed to be able to measure temperatures to within 1/200 of a degree Fahrenheit. Such precision was certainly uncommon in contemporary experimental physics but his doubters may have neglected his experience in the art of brewing and his access to its practical technologies. [Sibum (1994)] He was also ably supported by scientific instrument-maker .

However, in Germany, became aware both of Joule's work and the similar 1842 work of . Though both men had been neglected since their respective publications, Helmholtz's definitive 1847 declaration of the credited them both.

Also in 1847, another of Joule's presentations at the British Association in was attended by , , and the precocious and maverick , later to become , who had just been appointed professor of at the . Stokes was "inclined to be a Joulite" and Faraday was "much struck with it" though he harboured doubts. Thomson was intrigued but skeptical.

Unanticipated, Thomson and Joule met later that year in . Joule married Amelia Grimes on and the couple went on honeymoon. Marital enthusiasm notwithstanding, Joule and Thomson arranged to attempt an experiment a few days later to measure the temperature difference between the top and bottom of the waterfall, though this subsequently proved impractical.

Though Thomson felt that Joule's results demanded theoretical explanation, he retreated into a spirited defense of the Carnot-Clapeyron school. In his 1848 account of , Thomson wrote that "the conversion of heat (or caloric) into mechanical effect is probably impossible, certainly undiscovered" [See cite journal | author = Thomson, William | title = On an Absolute Thermometric Scale founded on Carnot's Theory of the Motive Power of Heat, and calculated from Regnault's Observations | journal = Philosophical Journal | year = 1848 | volume = | pages = - See also the account in cite book | author = Thomson, William | title = Mathematical and Physical Papers | year = 1882 | volume = | publisher = Cambridge University Press | location = Cambridge, England | pages = 100 &ndash; 106] - but a footnote signaled his first doubts about the caloric theory, referring to Joule's "very remarkable discoveries". Surprisingly, Thomson did not send Joule a copy of his paper but when Joule eventually read it he wrote to Thomson on , claiming that his studies had demonstrated conversion of heat into work but that he was planning further experiments. Thomson replied on the 27th, revealing that he was planning his own experiments and hoping for a reconciliation of their two views. Though Thomson conducted no new experiments, over the next two years he became increasingly dissatisfied with Carnot's theory and convinced of Joule's. In his 1851 paper, Thomson was willing to go no further than a compromise and declared "the whole theory of the motive power of heat is founded on ... two ... propositions, due respectively to Joule, and to Carnot and Clausius".

As soon as Joule read the paper he wrote to Thomson with his comments and questions. Thus began a fruitful, though largely epistolary, collaboration between the two men, Joule conducting experiments, Thomson analysing the results and suggesting further experiments. The collaboration lasted from 1852 to 1856, its discoveries including the , and the published results did much to bring about general acceptance of Joule's work and the .

Kinetics is the science of motion. Joule was a pupil of Dalton and it is no surprise that he had learned a firm belief in the , even though there were many scientists of his time who were still skeptical. He had also been one of the few people receptive to the neglected work of on the . He was further profoundly influenced by 's 1813 paper "On the measure of moving force".

Joule perceived the relationship between his discoveries and the kinetic theory of heat. His laboratory notebooks reveal that he believed heat to be a form of rotational, rather than translational motion.

Joule could not resist finding antecedents of his views in Francis Bacon, Sir , , Benjamin Thompson (Count Rumford) and Sir . Though such views are justified, Joule went on to estimate a value for the mechanical equivalent of heat of 1034 foot-pound from Rumford's publications. Some modern writers have criticised this approach on the grounds that Rumford's experiments in no way represented systematic quantitative measurements. In one of his personal notes, Joule contends that Mayer's measurement was no more accurate than Rumford's, perhaps in the hope that Mayer had not anticipated his own work.

Joule died at home in Sale [GRO Register of Deaths: DEC 1889 8a 121 ALTRINCHAM - James Prescott Joule] and is buried in Brooklands cemetery there. The gravestone is inscribed with the number "772.55", his climacteric 1878 measurement of the mechanical equivalent of heat, and with a quotation from the , "I must work the works of him that sent me, while it is day: the night cometh, when no man can work" (9:4).

* [http://dbhs.wvusd.k12.ca.us/webdocs/Chem-History/Joule-Heat-1845.html Classic papers of 1845 and 1847 at ChemTeam website] "On the Mechanical Equivalent of Heat" and "On the Existence of an Equivalent Relation between Heat and the ordinary Forms of Mechanical Power"
* [http://www.sciencemuseum.org.uk/on-line/treasure/objects/1876-492.asp Joule's paddle-wheel apparatus] at
* " [http://web.lemoyne.edu/~giunta/JOULE1.html Some Remarks on Heat and the Constitution of Elastic Fluids] ", Joule's 1851 estimate of the speed of a gas molecule.
* [http://www.bad.org.uk/public/historical_posters/JamesJoulePoster.pdf University of Manchester material on Joule] - includes photographs of Joule's house and gravesite
* [http://books.google.com/books?id=BCUJAAAAIAAJ&pg=PA209&dq=joule&as_brr=1#PPA208,M1 Dictionary of National Biography (1892)] - entry for Joule
*- obituary with brief comment on Joule's family