This article describes the Starfleet organization in the Star Trek universe; for other uses see Starfleet (disambiguation) 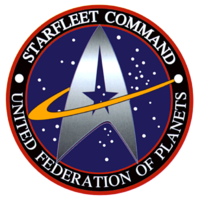 The flag of Starfleet Command

During production of early episodes of the original series, several details of the makeup of the Star Trek universe had yet to be worked out, including the operating authority for the USS Enterprise. The terms Star Service ("The Conscience of the King"), Spacefleet Command ("The Squire of Gothos"), United Earth Space Probe Agency ("Charlie X" and "Tomorrow Is Yesterday"), and Space Central ("Miri") were all used to refer to the Enterprise's operating authority before the term "Starfleet" became widespread from the episode "Court Martial" onwards.

According to the second pilot episode of the original series, "Where No Man Has Gone Before", following Zefram Cochrane's warp flight in 2063, Earth founded a few colonies in nearby star systems and established trade routes with a few species, such as the Vulcans. Soon after, the first attempts of deep-space exploration were conducted, such as the launch of the SS Valiant, but it is not shown which agency commissioned the spaceship.[citation needed]

References to UESPA were inserted into episodes from later series. For example, the Friendship One probe (launched, on the fictional timeline, in 2067) is marked with the letters UESPA-1 in the Star Trek: Voyager episode "Friendship One". Other background props included additional UESPA references, such as Captain Jean-Luc Picard's family album in Star Trek Generations. During the production of Star Trek: Enterprise, some larger Starfleet insignia designs included the name "United Earth Space Probe Agency".

Many Star Trek: Enterprise episodes refer to Starfleet having already been in full operation in 2119, when it funded research begun by Cochrane and Henry Archer leading to the first successful flight of Warp 3 vessels in the 2140s.[citation needed] This research is said to have evolved into the NX Program leading to Starfleet launching its first Warp 5-capable starship, Enterprise (NX-01), in 2151, followed by Columbia (NX-02) in 2155, as well as other vessels. Starfleet thereby becomes the lead exploratory and military wing of Earth.

Starfleet has a Prime Directive of non-interference with developing worlds or their internal politics. This is said not to be a Human construct, but stemmed from policies originally implemented by the Vulcans, who used the attainment of warp speed as a barometer for making first contact with a civilization. The Prime Directive and Starfleet's first contact policies are at the center of several episodes in each Star Trek series and the film Star Trek: First Contact. For obvious continuity reasons, in Star Trek: Enterprise, the Prime Directive is conspicuously absent.

Starfleet Headquarters is shown to be located on Earth, northeast of the Golden Gate Bridge in the Fort Baker area. Starfleet Academy is located in the same general area.[1] Additionally, various episodes show Starfleet operating a series of starbases throughout Federation territory, either built as planet-side facilities or as orbital docking stations (notably the titular installation in the Deep Space Nine series).

Starfleet has been shown to handle diplomatic, scientific, and defense missions, although their main mandate seems to be peaceful exploration in the search of sentient life. The flagship of Starfleet is often considered to be the starship USS Enterprise, even though that ship has generally not been commanded by a flag officer.

In the early years of Starfleet, as seen in Star Trek: Enterprise, Starfleet's mission is purely exploration and is not military in any sense except for weapons designed for defensive capabilities until the retrofitting of the Enterprise (NX-01) and the incorporation of MACOs (Military Assault Command Operations) after the Xindi attack on Earth. It is assumed this trend continues as Starfleet adopts a more traditional military role and assumes its regular place as the exploratory and defensive arm of the United Federation of Planets.

Starfleet has many components, including the following:

As early as the original Star Trek, characters refer to attending Starfleet Academy. Later series establish it as an officer training facility with a four-year educational program. The main campus is located near Starfleet Headquarters in what is now Fort Baker, California.

Starfleet Command is the headquarters/command center of Starfleet. The term "Starfleet Command" is first used in the TOS episode "Court Martial". Its headquarters are depicted as being in Fort Baker, across the Golden Gate from San Francisco, in Star Trek: The Motion Picture and Star Trek IV: The Voyage Home. Overlooking the Command from the other side of the Golden Gate is the permanent site of the Council of the United Federation of Planets in what is now the Presidio of San Francisco. Throughout the Star Trek franchise, the main characters' isolation from Starfleet Command compels them to make and act upon decisions without Starfleet Command's orders or information.

StarTrek.com notes that Starfleet's ships are built on Mare Island near San Francisco. It states:

In the 2009 film, Jim Kirk arrives at a shipyard near his home in Iowa and boards a shuttle to enlist in Starfleet; as the shuttle leaves, we see that the ship under construction there is the Enterprise.

The Starfleet Engineering Corps (also called the Starfleet Corps of Engineers) is mentioned in several episodes in conjunction with projects such as hollowing out the underground laboratory complex inside the Regula I asteroid in Star Trek II: The Wrath of Khan, the design of the Yellowstone-class Runabout in the alternate timeline in the Star Trek: Voyager episode "Non Sequitur", and devising a defense against the Breen energy-dampening weapon in the Star Trek: Deep Space Nine episode "When It Rains..." As a result of these successes, Starfleet engineers have gained a reputation as the undisputed masters of technological adaptation and modification. As one minion of the Dominion in the Star Trek: DS9 episode, "Rocks and Shoals" notes, Starfleet engineers are reputed to be able to "Turn rocks into replicators."

Additionally, Pocket Books has published a series of eBooks and novels in the Starfleet Corps of Engineers series.

Starfleet Intelligence is an intelligence agency of the United Federation of Planets. It is entrusted with foreign and domestic espionage, counter-espionage, and state security.

The Starfleet Judge Advocate General (or JAG) is the branch charged with overseeing legal matters within Starfleet.[2] Several episodes revolve around or involve JAG officers and procedures:[2]

Dialog in "Court Martial" reveals that a court-martial may be convened in the absence of any JAG officers by three presiding command-level officers.[3] Additionally, dialog in "The Measure of a Man" indicates that the loss of a starship automatically leads to a JAG court-martial. Courts-martial were held following the loss of the USS Pegasus and USS Stargazer.[2] In the Voyager episode "Parallax" Tuvok states that the Captain has the authority to conduct a court-martial on the ship, given the circumstances of the ship being isolated from the Federation.

Starfleet Medical is the medical branch of Starfleet.[2]

Gates McFadden, who played Dr. Beverly Crusher, left Star Trek: The Next Generation during its second season.[2] The character is described during this season, and after her return, as having been assigned to Starfleet Medical.[2]

Starfleet Security is an agency of Starfleet referred to in several episodes of Star Trek: The Next Generation and Star Trek: Deep Space Nine. Security itself is also a branch of Starfleet first introduced in the original Star Trek. Main characters in subsequent series have been security officers.

Starfleet Tactical is a rarely-mentioned department of Starfleet responsible for planning defensive strategies as well as weapons research and development.

Although Humans are the most often seen crewmembers onscreen, Starfleet is shown to be composed of individuals from over 150 races, with Vulcans perhaps being the most common aliens seen.

Already in TOS the USS Enterprise and other ships have a mixed-species crew, although this does not appear to be an absolute rule; the USS Intrepid is shown with an all-Vulcan crew in the episode "The Immunity Syndrome". In later series this is confirmed with another all-Vulcan crew, from the USS T'Kumbra, featured on the Star Trek: Deep Space Nine episode "Take Me Out to the Holosuite".

In keeping with this idea, for its first two seasons Star Trek: Enterprise was the only show to have an entirely Human crew owing to its being set before the formation of the Federation, though the vessel did carry Phlox, a Denobulan serving in a medical exchange program, and T'Pol, then serving as an observer from the Vulcan High Command.

Star Trek: The Next Generation saw the introduction of Starfleet's first Klingon officer, and other races such as Bolians, Betazoids, and Trill were seen and given more central roles in later series; some of these, notably Klingons, had been shown as enemies in earlier episodes.

Various episodes show that Earth citizenship was not a necessary pre-condition to joining Starfleet. T'Pol of Vulcan is shown as the first non-human Starfleet officer, having received a commission as a Commander following the Xindi mission and her resignation from the Vulcan High Command. Even after the formation of the Federation, citizenship is still not a requirement, as several officers are from planets that are not part of the Federation. For example, Star Trek: TNG's Ensign Ro Laren, a Bajoran aboard the U.S.S. Enterprise D, and Bajoran Colonel Kira Nerys was field commissioned as a Starfleet Commander so that she could aid the Cardassian resistance during the Dominion War without jeopardizing Bajor's non-aggression pact with the Dominion. Also, Quinn and Icheb from Star Trek: Voyager both spoke of joining Starfleet.

An example of the process imagined by the writers is given when the character Nog, the first Ferengi to do so, attempts to apply to the Academy. In this case he is told that since he is from a non-member world (Ferenginar), he requires a letter of recommendation from a command-level officer before his application can be considered, with the implication that this is the standard procedure for all non-Federation applicants to Starfleet.

In the Star Trek Expanded Universe, the Bajoran Militia is integrated into Starfleet upon Bajor's entry into the Federation, and Kira is promoted to the Starfleet rank of captain.