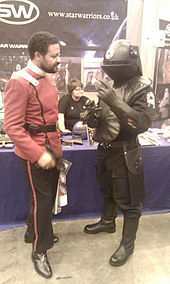 Fans and scholars of Star Trek and Star Wars compare the franchises' merits while merchandisers compete to sell rival products.[1] Media critics and analysts have compared and contrasted the two works in particular because of their great impact and similarities. The franchises are both huge bodies of work that make up billions of dollars of intellectual property providing work and entertainment for millions of people.[2]

Star Wars was inspired by the Flash Gordon adventure serials of the 1940s[3] and presents an elemental struggle between good and evil.[2] Star Trek was conceived in the style of the TV western Wagon Train and the adventure stories of Horatio Hornblower but adopted a more adult tone, providing an idealistic, utopian prospect of future human society. While Star Wars creator George Lucas was inspired by works such as Beowulf and King Arthur, and the origins of myth and world religions,[4] Star Trek creator Gene Rodenberry was inspired by stories like Gulliver's Travels that implied a morality tale.[5] The two franchises nonetheless have a "symbiotic relationship", states William Shatner, who credits Star Wars for the beginning of the Star Trek films.[6]

Richard Ho, writing for The Harvard Crimson, states that the heroes of Star Wars such as Han Solo and Luke Skywalker have a swashbuckling style while the protagonists of Star Trek such as Captain Picard and Mr. Spock resolve their challenges with science and intellect.[2]

David Brin contrasted the moral and political messages of the two works in "Star Wars" despots vs. "Star Trek" populists, characterizing the philosophy of Star Wars as elitist and authoritarian, as compared with the more progressive and egalitarian spirit of Star Trek.[7]

A key difference between the franchises may be that Star Trek is science fiction while Star Wars is science fantasy.[8][9] Contrasting the focus of the two franchises, The New York Times argues that

Trek fandom revolves around technology because the Star Trek universe was founded on ham-fisted dialogue and Gong Show-caliber acting. But the fictional science has always been brilliant. The science in Star Wars is nonsense, and everyone knows it. But no one cares because Star Wars isn't about science. It's epic drama. It's about those incredibly well-developed characters and the moral decisions they face. People don't get into debates about how the second Death Star works. They get into debates about the ethics of blowing it up.[10]

In 2001, the documentary Star Wars vs. Star Trek: The Rivalry Continues was released on DVD by Passport Video.[12] It covers a brief history of the development of both franchises.[13]