Jean Henri Gaston Giraud (born 8 May 1938)[1] is a French comics artist. Giraud has earned worldwide fame, not only under his own name but also under the pseudonym Moebius, and to a lesser extent Gir, the latter appearing mostly in the form of a boxed signature at the bottom of the artist's paintings, for instance the volumes' covers. 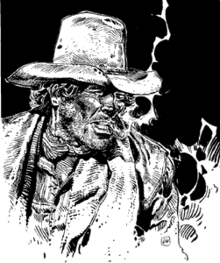 Blueberry is one of Giraud's most famous creations.

Jean Giraud was born in Nogent-sur-Marne, in the suburbs of Paris, in 1938.[2] At age 16, he began his only technical training at the Arts Appliqués.[3]

At 18, Giraud was drawing his own comic strip, "Frank et Jeremie" for the magazine Far West. In 1961, Giraud became an apprentice of Jijé, one of the leading comic artists in Europe of the time, and collaborated on an album of Jerry Spring.[3] In 1962 Giraud and writer Jean-Michel Charlier started the comic strip Fort Navajo for Pilote. It was a great hit and continued uninterrupted until 1974. The Lieutenant Blueberry character, created by Giraud and Charlier for Fort Navajo, quickly became its most popular character, and his adventures as told in the spin-off Western serial Blueberry, are possibly Giraud's best known work in his native France before his later collaborations with Alejandro Jodorowsky. Giraud's prestige in France – where comics are held in high artistic regard – is enormous; In 1988 Moebius was chosen, among 11 other winners of the prestigious Grand Prix of the Angoulême Festival, to illustrate a postage stamp set issued on the theme of communication.[4] Under the names Giraud and Gir, he also wrote numerous comics for other comic artists like Auclair and Tardi.

The Moebius pseudonym, which Giraud came to use for his science fiction and fantasy work, was born in 1963.[3] In a satire magazine called Hara-Kiri, Moebius did 21 strips in 1963–64 and then disappeared for almost a decade. In 1975 Métal Hurlant (a magazine which he co-created) brought it back and in 1981 he started his famous L'Incal series in collaboration with Alejandro Jodorowsky. Moebius' famous serial The Airtight Garage and his groundbreaking Arzach also began in Métal Hurlant.

Moebius has contributed storyboards and concept designs to numerous science fiction films. In 1982 he collaborated with director René Laloux to create the science fiction feature-length animated movie Les Maîtres du temps (released in English as Time Masters) based on a novel by Stefan Wul. In 1988 Moebius worked on the American comic character The Silver Surfer with Stan Lee for a special two-part limited series. Giraud also happens to be a friend of filmmaker Hayao Miyazaki. From December 2004 to March 2005, the two of them shared an exhibition at La Monnaie in Paris which showcased work by both artists.[5] He even named his daughter Nausicaä from Miyazaki's Nausicaä of the Valley of the Wind.[6][7]

Jean Giraud drew the first of the two-part last volume of the XIII series titled La Version Irlandaise (The Irish Version) from a script by Jean Van Hamme, to accompany the second part by the regular team Jean Van Hamme-William Vance, Le dernier round (The Last Round). Both parts were published on the same date (13 November 2007).[8]

His graphic style can change dramatically and adapt to the style and the tone of the series. It ranges from the extreme realism of the beginning of his career as in the Aventures du lieutenant Blueberry, started in 1963, to dream-like nature in more recent works. He has drawn etchings, white and black illustrations, work in colour of the ligne claire genre, water colours.[9]

The artist's working methods were also various and adaptable. Giraud's solo Blueberry works were sometimes criticized by fans of the series because the artist had dramatically changed the tone of the series as well as the graphic style.[10] However, Blueberry's early success was also due to Giraud's innovations as he did not content himself with following earlier styles, an important aspect of his development as an artist.[11]

To distinguish between work by Giraud and Moebius, Giraud uses a brush for his own work and a pen when he signs his work as Moebius. Giraud draws very quickly.[12] 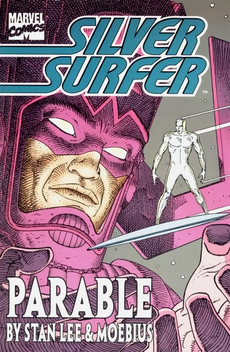 Jean Giraud has been active in the comics scene since the 1960s. Those works for which English translations have been published are noted as such; their respective pages describe this further.

Various comics have been collected into trade paperbacks: