McKean's most recent projects are directing an original feature called Luna, and a book with the evolutionary biologist Richard Dawkins.

After a trip to New York in 1986 during which he failed to find work as a comics artist, McKean met writer Neil Gaiman, and the pair collaborated on a short graphic novel of disturbing childhood memories, Violent Cases, published in 1987. This was followed in 1988 by a Black Orchid miniseries (again with Gaiman) and Hellblazer covers for DC Comics.[1][2]

In 1989, he illustrated the Batman graphic novel, Arkham Asylum: A Serious House on Serious Earth, with writer Grant Morrison. His work during this period was often compared to that of Bill Sienkiewicz.[citation needed]

From 1989–1996 McKean produced the covers for Gaiman's celebrated series The Sandman, all its collected editions, and many of its spin-offs. Further collaborations with Gaiman produced the graphic novels Signal to Noise in 1992 (previously serialized in The Face magazine), about a dying filmmaker and his hypothetical last film; and Mr. Punch, which explored similar themes as Violent Cases through the imagery of the Punch and Judy show.

In 1995 McKean wrote and illustrated a book for The Rolling Stones called Voodoo Lounge to tie-in with the release of their album of the same name. 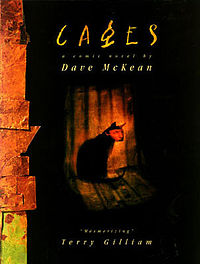 Between 1990 and 1996 McKean wrote and drew the ten issues of Cages, an ambitious graphic novel about artists and creativity, illustrated in a stripped-down pen-and-ink style influenced by Alberto Breccia, José Antonio Muñoz and Lorenzo Mattotti.[citation needed] Cages was published as single volume by Kitchen Sink Press in 1998, and in a new edition by NBM Publishing in 2002. In 2010, Cages was released by Dark Horse Comics in paperback for the first time.

In 2005, McKean designed the poster for the 32nd Telluride Film Festival. In 2006, he designed projections, sets and directed film clips for the Broadway musical Lestat, adapted from Anne Rice's novels, with music and lyrics by Elton John and Bernie Taupin.

He has published four books of photography:

McKean has collaborated with Neil Gaiman on two children's picture books, The Day I Swapped My Dad for Two Goldfish (1998) and The Wolves in the Walls (2003), and illustrated Gaiman's children's novels Coraline (2002) and The Graveyard Book (2008), as well as S. F. Said's Varjak Paw (2003). The Wolves in the Walls: a Musical Pandemonium premiered as a play in Glasgow in 2006 with Improbable and the National Theatre of Scotland. He also illustrated David Almond's The Savage published in April 2008, and Slog's Dad published in September 2010. In 2011, McKean collaborated with Richard Dawkins on The Magic of Reality, a science book for children.[3]

In 2008, McKean collaborated with Heston Blumenthal on The Fat Duck Cookbook, an autobiography, compilation of key recipes and insight into Blumenthal's scientific method. The book was nominated in the James Beard Foundation Awards for Cooking from a Professional Point of View and won the Photography/Illustration award.

McKean created 6 images for Royal Mail's Mythical Creatures collection, which featured depictions of mythical creatures found in British folklore, including dragons, unicorns, giants, pixies, mermaids, and fairies. The collection was released in the UK on 16 June 2009. The Presentation Pack contains short descriptions of each subject by author Neil Gaiman.[4]

MirrorMask, McKean's first feature film as director, premiered at the Sundance Film Festival in January 2005. The screenplay was written by Neil Gaiman, from a story by Gaiman and McKean. A children's fantasy which combines live action and digital animation, Mirrormask was produced by Jim Henson Studios and stars Stephanie Leonidas, Jason Barry, Rob Brydon, and Gina McKee. Before MirrorMask, McKean directed a number of television intros and music videos as well as several short films, such as The Week Before (1998) and N[eon] (2002), which are included in the compilation DVD of McKean's work Keanoshow from Allen Spiegel Fine Arts. McKean was also a conceptual artist on Harry Potter and the Prisoner of Azkaban (2004), Harry Potter and the Goblet of Fire (2005) and the TV mini-series, Neverwhere, by Neil Gaiman (1996). A second feature film; Luna, written and directed by McKean and once again starring Stephanie Leonidas is due for release in 2011. McKean is also directing a film of the National Theatre Wales's Passion play in Port Talbot which stars Michael Sheen.[5]

McKean has won numerous awards and accolades. Over the years, he has been nominated 5 times for a World Fantasy Award in the category of "Artist", and in 1991 he won the award.[6] His graphic novel Cages won the Alph-Art, Pantera, and Harvey Awards for best Graphic Novel.[7] He has been nominated 6 times and won 3 Spectrum Awards in the categories of "Advertising", "Book", and "Comic".[8] His collection of short comics, Pictures That Tick won the V&A Museum Illustrated Book Awards Overall First Prize.[7] In 2004, McKean won a BSFA Award in "Short Fiction" along with Neil Gaiman for their work, The Wolves in the Walls. His film MirrorMask was nominated for the William Shatner Golden Groundhog Award for Best Underground Movie,[9] the other nominated films were Green Street Hooligans, Nine Lives, Up for Grabs and Opie Gets Laid.[10]