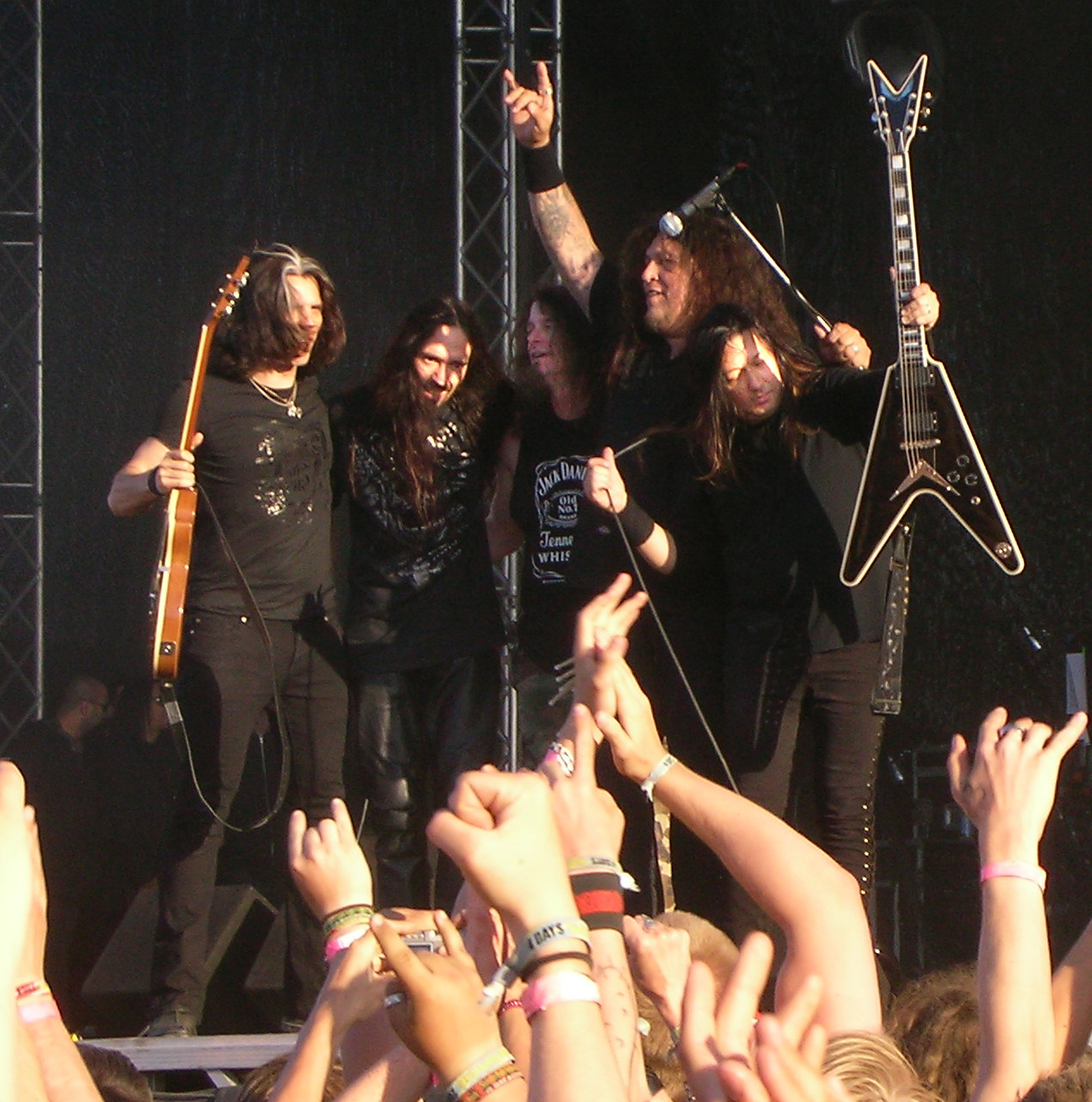 Testament is an American band from . Testament has two Top 40 albums and one Top 50 album to its credit in the UK. Their 2008 album entered the Top 20 in at #15. The 1999 album "The Gathering" also entered the Top 50 in Germany. They had minor top 100 album success in the United States.

Testament was formed in the area in 1983 by guitarist Eric Peterson and his cousin, Derrick Ramirez, also a guitarist, originally using the name Legacy. The band soon recruited bassist , drummer Mike Ronchette, and vocalist . Ramirez was subsequently replaced by guitarist , who had studied under bay-area guitarist . The band released one self-titled 4 song demo in 1986. Ronchette left shortly after the recording and was replaced by . Steve Souza subsequently left the band to join Exodus, and suggested that Chuck Billy should replace him on lead vocals. While recording their first album, the band was forced to change their name to Testament (which, according to Maria Ferrero in the May 2007 issue of Revolver, was suggested by of S.O.D.) because "The Legacy" was already trademarked by a jazz band.

Testament's first album, "The Legacy", was released in 1987 on . Testament received instant fame within thrash circles and were often compared with fellow bay-area thrash pioneers . The band quickly managed to increase their exposure by heading out on a successful tour of America and Europe with Anthrax, who were then touring in support of their "" album. On this tour the "" EP was recorded.

The next album, "", was released in 1988, and found the band continuing in a similar vein. After another successful world tour the band headed back into the studio to record "Practice What You Preach". Released in 1989, the album minimized the occult and gothic themes found in the lyrical content of their first two albums, instead focusing on real-life issues such as politics and corruption. The album was the band's most popular to date and even MTV took notice, giving the title track extensive airplay on .Fact|date=April 2008

However, Testament would never be able to equal the success they found with "Practice". In 1990, "" was released to mixed reviews and slow album sales. Attempting to reconnect with an audience distracted by the growing movement, Testament released "" in 1992. "The Ritual" saw a stylistic move away from thrash to a slightly more traditional heavy metal sound. Sales were poor and the band began to implode. [ [http://metalupdate.com/interviewbilly.html http://metalupdate.com/interviewbilly.html] ]

The next two decades were marked by a series of changes in the formation of the band, followed by a change of pace in its musical style. Lead guitarist Alex Skolnick and drummer Louie Clemente, who had begun to involve more mainstream thinking which did not jibe with Peterson, Billy, and Christian's traditional thrash preferences, as a result of this clashing, left soon after "The Ritual"'s release. Skolnick would subsequently leave to temporarily join . Drummer Louie Clemente moving towards a more stable non-musical career, whereas Peterson and Billy wanted Testament to become more metal, not less.

In 1993, Skolnick and Clemente were temporarily replaced by Glen Alvelais and respectively, both of the thrash band Forbidden. This lineup released the 1993 live EP, "". Soon after, Alvelais quit the band and Paul Bostaph departed to join Slayer. 1994's "Low", featured on drums and guitarist James Murphy, formerly of , Death, Cancer, and Obituary. "Low" was a diverse album, featuring various influences such as , , and as well as a ballad: "Trail of Tears". The band's remaining fans reacted favorably to "Low" although it did little to expand Testament's fanbase. Some fans, however, viewed Testament's move away from the mainstream as a liberation that allowed them to expand artistically, not being pressured by sales and success as they once were. Tempesta left after the recording of the album, being replaced by for the following tour. After their 1994-1996 tour, Greg Christian, James Murphy Jon Dette departed the band.

Dette departed temporarily to join Slayer to replace Bostaph, a former member of Testament. Dette's temporary replacement was Chris Kontos, formerly of Machine Head and he featured on the 1996 club tour.

The band's follow-up album, "Demonic", released in 1997, took a new approach, and found Testament experimenting with death metal more. The album featured Eric Peterson on both lead and rhythm guitar (although Glen Alvelais made a guest appearance, and played on the subsequent tour), early member Derrick Ramirez on bass guitar, and former Dark Angel drummer . Hoglan left before the tour to join , with once again Jon Dette returning to tour. By 1999, Ramirez and Alvelais had departed and James Murphy had returned for the release of "The Gathering". The rhythm section on "The Gathering" was highly respected, consisting of metal fretless bass pioneer (formerly of Death and ) and original Slayer drummer . The sound of the album was largely a combination of death metal, thrash metal, and a minor influence from Eric Peterson's , .

Soon after the release of "The Gathering", lead guitarist James Murphy was diagnosed with a . Through various fundraisers, Murphy was able to afford surgery and eventually made a full recovery. Nevertheless, he now cannot recall anything from the recording of "The Gathering". In 2001, Chuck Billy was also diagnosed with a type of called germ cell seminoma. This kind of cancer is a rare form of testicular cancer, but it only affected Billy's lungs and heart. His cancer was also treated successfully. In August 2001, friends of Billy organized the "" benefit concert, featuring seminal bands , , Exodus, , and others. The show was headlined by a Legacy reunion, featuring on vocals, and former guitarist , who had not played with the band since 1992 and Greg Christian. Late in 2001, Testament released "", a collection of re-recordings (with modern studio technology) of songs from their first two albums. The album featured the lineup of Billy, Peterson, DiGiorgio, the return of Alex Skolnick on guitar and John Tempesta on drums.

By 2003 Chuck Billy had completely recovered, and the band began performing live again with a new drummer, John Allen of Sadus. In 2004, the band changed their lineup once again for their summer festival live appearances, and John Allen was replaced by Paul Bostaph, returning to the band for a second stint after a decade's absence. Lead guitarist also departed to join , and was replaced by ex-Halford guitarist "Metal" Mike Chlasciak. Ironically, shortly after Steve Smyth's departure, Eric Peterson fell down a flight of stairs, breaking his leg, and was unavailable for some dates. He was temporarily replaced by Steve Smyth.

In May 2005, it was announced that Testament would be doing a brief Europe-only reunion tour - known as the "10 Days in May Tour" - featuring the original lineup of Billy, Peterson, Skolnick and Christian, with drum duties shared between John Tempesta and Louie Clemente. After the success of the initial tour dates, Testament announced more dates in the U.S., and with the classic lineup. Alex has also been touring the East Coast with the .

Testament played for the first time in the at the festival in March 2006. Other notable bands that performed for the Desert Rock Festival were , and .

In July 2007, the band played a show at Jaxx Nightclub in , with filling in on drum duties. It was later confirmed that Bostaph would be officially returning to the band to record the new album. The band debuted a new song at that show, currently entitled "The Afterlife" [ [http://www.metalunderground.com/news/details.cfm?newsid=27495 http://www.metalunderground.com/news/details.cfm?newsid=27495] ] , which they also played again at .

In February 2008, the band released the song "More Than Meets the Eye" from the new album on their page.

Testament released its new album, titled "", on , . Their first studio album in nine years, it is the first Testament album to feature Alex Skolnick on guitar since 1992's "", also the first to feature bassist Greg Christian since 1994's "Low". Interviews on the "Live In London" DVD suggest that a follow-up to "The Formation of Damnation" may be written with the classic album lineup. Eric Peterson did say that Skolnick has been writing songs for the new album. [ [http://www.roadrunnerrecords.com/blabbermouth.net/news.aspx?mode=Article&newsitemID=53641 TESTAMENT Guitarist: 'New Material Is Sounding Pretty Old-School'] ] They then signed to Nuclear Blast Records. [ [http://www.roadrunnerrecords.com/blabbermouth.net/news.aspx?mode=Article&newsitemID=75714 http://www.roadrunnerrecords.com/blabbermouth.net/news.aspx?mode=Article&newsitemID=75714] ]

Also, the band was confirmed to be the main event on the first day of the "Gillmanfest," a rock festival to be held on May 24, 2008, in Valencia, . Testament will also be visiting for the second time in the band's extensive career. Testament will also be touring the U.S., as a supporting act for , Heaven and Hell, and on the "".

Testament has had numerous lineup changes, and Eric Peterson and Chuck Billy have been the only constant members.