Screenplay
This article is about the media object. For other uses, see Screenplay (disambiguation).
Main article: Pre-production
See also: Screenwriting 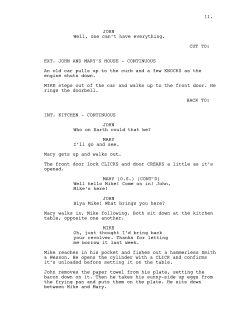 Sample from a screenplay, showing dialogue and action descriptions

A screenplay or script is a written work that is made especially for a film or television program. Screenplays can be original works or adaptations from existing pieces of writing. In them, the movement, actions, expression, and dialogues of the characters are also narrated. A play for television is known as a teleplay.

The format is structured in a way that one page usually equates to one minute of screen time. In a "shooting script", each scene is numbered, and technical direction may be given. In a "spec" or a "draft" in various stages of development, the scenes are not numbered, and technical direction is at a minimum. The standard font for a screenplay is 12 point, 10 pitch Courier.

The major components are action and dialogue. The "action" is written in the present tense. The "dialogue" are the lines the characters speak. Unique to the screenplay (as opposed to a stage play) is the use of slug lines.

The format consists of two aspects:

The style consists of a grammar that is specific to screenplays. This grammar also consists of two aspects:

Screenplays can generally be divided into two kinds; a 'spec' screenplay, and a commissioned screenplay.

A speculative screenplay is a script written with no upfront payment, or a promise of payment. The content is usually invented solely by the screenwriter, though spec screenplays can also be based on established works, or real people and events.

A commissioned screenplay is written by a hired writer. The concept is usually developed long before the screenwriter is brought on, and usually has many writers work on it before the script is given a green-light.