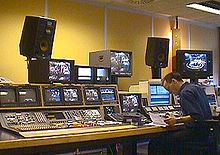 Post-production is part of filmmaking and the video production process. It occurs in the making of motion pictures, television programs, radio programs, advertising, audio recordings, photography, and digital art. It is term for all stages of production occurring after the actual end of shooting and/or recording the completed work.

Post-production is, in fact, many different processes grouped under one name. These typically include:

Typically, the post-production phase of creating a film takes longer than the actual shooting of the film, and can take several months to complete because it includes the complete editing, color correction and the addition of music and sound. The process of editing a movie is also seen as the second directing because through the post production it is possible to change the intention of the movie so intense. Furthermore through the use of color correcting tools and the addition of music and sound, the atmosphere of the movie can be heavily influenced for instance a blue-tinted movie is associated with a cold atmosphere and the choice of music and sound increases the effect of the shown scenes to the audience.

Post-production was named the one of the 'Dying Industries' by IBISWorld.[1] The once exclusive service offered by high end post houses or boutique facilities have been eroded away by video editing software that operates on a non-linear editing system (NLE). However, traditional (analogue) post-production services are being surpassed by digital, leading to sales of over $6 billion annually.[2]