Video
For films or movies, see Film. For other uses, see Video (disambiguation).
For the use of video in Wikipedia articles, see Wikipedia:Creation and usage of media files.

Video is the technology of electronically capturing, recording, processing, storing, transmitting, and reconstructing a sequence of still images representing scenes in motion.

Video recorders sold for $50,000 in 1956, and videotape cost $300 per one-hour reel.[1] However, prices steadily dropped over the years; in 1971, Sony began selling videocassette recorder (VCR) tapes to the public. After the invention of the DVD in 1997 and Blu-ray Disc in 2006, sales of videotape and tape equipment plummeted. 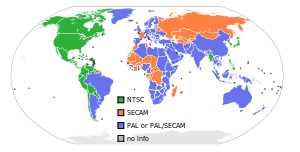 The term video (meaning "I see", from the Latin verb "videre") commonly refers to transmission and storage formats for moving pictures. Storage formats include digital video formats, including Blu-ray Disc, DVD, QuickTime (QT), and MPEG-4; and analog videotapes, including VHS and Betamax. Video can be recorded and transmitted in various physical media: in magnetic tape when recorded as PAL or NTSC electric signals by video cameras, or in MPEG-4 or DV digital media when recorded by digital cameras. Quality of video essentially depends on the capturing method and storage used. Digital television (DTV) is a relatively recent format with higher quality than earlier television formats and has become a standard for television video. (See List of digital television deployments by country.)

In many countries, the term video is often used informally to refer to both Videocassette recorders and video cassettes; the meaning is normally clear from the context.

Number of frames per second

Frame rate, the number of still pictures per unit of time of video, ranges from six or eight frames per second (frame/s) for old mechanical cameras to 120 or more frames per second for new professional cameras. PAL (Europe, Asia, Australia, etc.) and SECAM (France, Russia, parts of Africa etc.) standards specify 25 frame/s, while NTSC (USA, Canada, Japan, etc.) specifies 29.97 frame/s. Film is shot at the slower frame rate of 24photograms/s, which complicates slightly the process of transferring a cinematic motion picture to video. The minimum frame rate to achieve the illusion of a moving image is about fifteen frames per second.

Video can be interlaced or progressive. Interlacing was invented as a way to reduce flicker in early mechanical and CRT video displays without increasing the number of complete frames per second, which would have required sacrificing image detail in order to remain within the limitations of a narrow bandwidth. The horizontal scan lines of each complete frame are treated as if numbered consecutively and captured as two fields: an odd field (upper field) consisting of the odd-numbered lines and an even field (lower field) consisting of the even-numbered lines.

Analog display devices reproduce each frame in the same way, effectively doubling the frame rate as far as perceptible overall flicker is concerned. When the image capture device acquires the fields one at a time, rather than dividing up a complete frame after it is captured, the frame rate for motion is effectively doubled as well, resulting in smoother, more life-like reproduction (although with halved detail) of rapidly moving parts of the image when viewed on an interlaced CRT display, but the display of such a signal on a progressive scan device is problematic.

NTSC, PAL and SECAM are interlaced formats. Abbreviated video resolution specifications often include an i to indicate interlacing. For example, PAL video format is often specified as 576i50, where 576 indicates the total number of horizontal scan lines, i indicates interlacing, and 50 indicates 50 fields (half-frames) per second.

In progressive scan systems, each refresh period updates all of the scan lines of each frame in sequence. When displaying a natively progressive broadcast or recorded signal, the result is optimum spatial resolution of both the stationary and moving parts of the image. When displaying a natively interlaced signal, however, overall spatial resolution will be degraded by simple line doubling and artifacts such as flickering or "comb" effects in moving parts of the image will be seen unless special signal processing is applied to eliminate them. A procedure known as deinterlacing can be used to optimize the display of an interlaced video signal from an analog, DVD or satellite source on a progressive scan device such as an LCD Television, digital video projector or plasma panel. Deinterlacing cannot, however, produce video quality that is equivalent to true progressive scan source material. 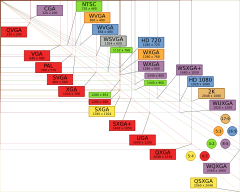 The size of a video image is measured in pixels for digital video, or horizontal scan lines and vertical lines of resolution for analog video. In the digital domain (e.g. DVD) standard-definition television (SDTV) is specified as 720/704/640×480i60 for NTSC and 768/720×576i50 for PAL or SECAM resolution. However in the analog domain, the number of visible scanlines remains constant (486 NTSC/576 PAL) while the horizontal measurement varies with the quality of the signal: approximately 320 pixels per scanline for VCR quality, 400 pixels for TV broadcasts, and 720 pixels for DVD sources. Aspect ratio is preserved because of non-square "pixels".

Video resolution for 3D-video is measured in voxels (volume picture element, representing a value in three dimensional space). For example 512×512×512 voxels resolution, now used for simple 3D-video, can be displayed even on some PDAs.

Ratios where the height is taller than the width are uncommon in general everyday use, but do have application in computer systems where the screen may be better suited for a vertical layout. The most common tall aspect ratio of 3:4 is referred to as portrait mode and is created by physically rotating the display device 90 degrees from the normal position. Other tall aspect ratios such as 9:16 are technically possible but rarely used. (For a more detailed discussion of this topic please refer to the page orientation article.)

Color space and bits per pixel 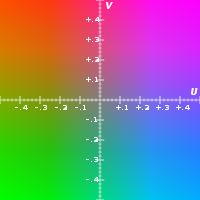 Video quality can be measured with formal metrics like PSNR or with subjective video quality using expert observation.

The subjective video quality of a video processing system may be evaluated as follows:

Many subjective video quality methods are described in the ITU-T recommendation BT.500. One of the standardized method is the Double Stimulus Impairment Scale (DSIS). In DSIS, each expert views an unimpaired reference video followed by an impaired version of the same video. The expert then rates the impaired video using a scale ranging from "impairments are imperceptible" to "impairments are very annoying".

A wide variety of methods are used to compress video streams. Video data contains spatial and temporal redundancy, making uncompressed video streams extremely inefficient. Broadly speaking, spatial redundancy is reduced by registering differences between parts of a single frame; this task is known as intraframe compression and is closely related to image compression. Likewise, temporal redundancy can be reduced by registering differences between frames; this task is known as interframe compression, including motion compensation and other techniques. The most common modern standards are MPEG-2, used for DVD, Blu-ray and satellite television, and MPEG-4, used for AVCHD, Mobile phones (3GP) and Internet.

Variable bit rate (VBR) is a strategy to maximize the visual video quality and minimize the bit rate. On fast motion scenes, a variable bit rate uses more bits than it does on slow motion scenes of similar duration yet achieves a consistent visual quality. For real-time and non-buffered video streaming when the available bandwidth is fixed, e.g. in videoconferencing delivered on channels of fixed bandwidth, a constant bit rate (CBR) must be used.

There are different layers of video transmission and storage, each with its own set of formats to choose from.

For transmission, there is a physical connector and signal protocol ("video connection standard" below). A given physical link can carry certain "display standards" which specify a particular refresh rate, display resolution, and color space.

Many analog and digital recording formats are in use, and digital video clips can also be stored on a computer file system as files which have their own formats. In addition to the physical format used by the data storage device or transmission medium, the stream of ones and zeros that is sent must be in a particular digital "video encoding", of which a number are available.

New formats for digital television broadcasts use the MPEG-2 video codec and include:

An analog video format consists of more information than the visible content of the frame. Preceding and following the image are lines and pixels containing synchronization information or a time delay. This surrounding margin is known as a blanking interval or blanking region; the horizontal and vertical front porch and back porch are the building blocks of the blanking interval.

Many countries are planning a digital switchover soon.

See Computer display standard for a list of standards used for computer monitors and comparison with those used for television.