Though the cinema of Indonesia has a long history, the industry is currently struggling and developing. 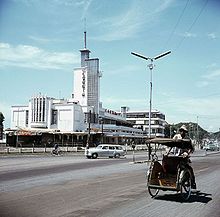 The first film made in Indonesia was the 1926 silent film, Loetoeng Kasaroeng, by Dutch directors G. Kruger and L. Heuveldorp. It was made with local actors by the NV Java Film Company in Bandung and premiered on December 31, 1926 at the Elite and Majestic Theatres in Bandung.[1] Since then, more than 2,200 feature films have been produced. After its genesis during the Dutch colonial era, the Indonesian film industry was supported by the Japanese occupiers during the Second World War as a propaganda tool.

After independence, the Sukarno government used it for nationalistic, anti-Western purposes. Foreign film imports were banned. After the overthrow of Sukarno by Suharto's New Order regime, films were regulated through a censorship code that aimed to maintain the social order.[2] Usmar Ismail, a director from West Sumatra made a major imprint in Indonesian film in the 1950s and 1960s.

The industry reached its peak in the 1980s, with such successful films as Naga Bonar (1987) and Catatan Si Boy (1989). Warkop's comedy films, directed by Arizal also proved to be successful. The industry has also found appeal among teens with such fare as Pintar-pintar Bodoh (1982), and Maju Kena Mundur Kena (1984). Actors during this era included Deddy Mizwar, Eva Arnaz, Lidya Kandou, Onky Alexander, Meriam Bellina, Rano Karno, and Paramitha Rusady.[3]

However, by the 1990s imports of foreign films resumed, and the artistic quality of Indonesian films was reduced due to competition, especially from the US and Hong Kong. The number of movies produced decreased significantly, from 115 movies in 1990 to just 37 in 1993.[4] Rampant counterfeiting and television also contributed to the degradation of Indonesian cinema. In decade, Indonesian cinema dominated by serial electronic cinema (sinetron). Multivision Plus under Raam Punjabi, controlled one of many cinema companies who produced sinetron. The majority of films produced were exploitive, adult-themed B-movies shown in budget cinemas and outdoor screenings or direct-to-video or television.[3] In 1996, 33 films were made in Indonesia, with majority of the films produced were filled with adult-themed content, and later on decreased significantly. only seven domestic films were made in 1999.

Under the Reformasi movement of the post-Suharto era, independent filmmaking was a rebirth of the filming industry in Indonesia, where film's started addressing topics which were previously banned such as; religion, race, love and other topics[2]

Recent notable films include What's Up with Love? directed by Rudi Soedjarwo in 2002, Eliana Eliana, directed by Riri Riza, and Arisan! starring Tora Sudiro, which was released in 2005, Beauty and Warrior, Indonesia's first animated feature film was released. That same year Gie (dir. Riri Riza), based on a biopic of Indonesian activist Soe Hok Gie, was also released.

The release of Ayat-ayat Cinta (Verses of Love), directed by Hanung Bramantyo. attracted one segment of audience like never before in the Indonesian Filming. The melodramatic story did not give new approaches to cinematic storytelling but the crossover between Islam and modern-romance story has succeeded in getting Muslim's around the country to lure the cinemas.[5]

In 2009, Infinite FrameWorks released their first full-length animation movie, Sing to the Dawn ("Meraih Mimpi" in Indonesian). The movie itself is almost Indonesian-made since some of top members are foreigners. However, all artists and dubbers are Indonesian and most of the dubbers are top celebrities (like Gita Gutawa, Surya Saputra, Patton, etc.).

In 2010-2011, due to the substantial increase in tax applied to foreign films cinemas no longer have access to any foreign films, including prominent films that are highlighted during the years Oscar Winning films. Foreign films include major box offices from western, european and other major film industries of the world. This has caused a massive ripple effect on the country's economy. It would be assumed that this event would increase purchases of pirated DVDs. However, even pirated DVDs now take a much longer time requirement to obtain the demanded foreign films making the standard cost to have access to foreign films a min of 1 million Rupiah. This is equivalent to US$100, as it includes a plane ticket to Singapore. [6]

The major film festival of Indonesia is the Jakarta International Film Festival (JiFFest) held every year in December since 1998. The eighth festival began on the December 8, 2006 with Babel, a film starring Brad Pitt and Cate Blanchett. The 9th JiFFest was held on December 7–16, 2007.

Another event is the Indonesian Film Festival (Festival Film Indonesia/FFI), which has been held intermittently since 1955. From 1973 to 1992, the festival was held annually and then discontinued until it was later revived in 2004. It hosts a competition, which hands out the Citra Award. 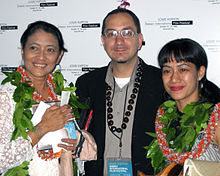 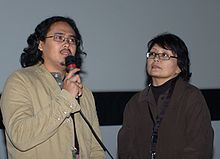 The largest movie theater chain in Indonesia is 21 Cineplex, which has cinemas spread throughout twenty-four cities on the islands of Sumatra, Java, Kalimantan, Bali and Sulawesi. However, many smaller independent cinemas also exist. Another movie theater chain is the recently-opened Blitzmegaplex, which opened its first location in 2006 and have continued to expand each year, operating 7 locations as of mid-2011. Their flagship cineplex, the Blitz Megaplex Grand Indonesia in Jakarta, is dubbed Indonesia's largest cineplex by the MURI (Indonesian Record Museum).