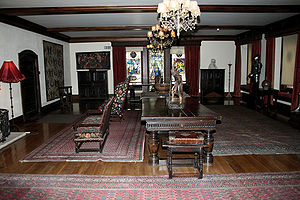 A drawing room is a room in a house where visitors may be entertained. The name is derived from the sixteenth-century terms "withdrawing room" and "withdrawing chamber", which remained in use through the seventeenth century, and made its first written appearance in 1642 (OED). In a large sixteenth- to early eighteenth-century English house, a withdrawing room was a room to which the owner of the house, his wife, or a distinguished guest who was occupying one of the main apartments in the house could "withdraw" for more privacy. It was often off the great chamber (or the great chamber's descendant, the state room or salon) and usually led to a formal, or "state" bedroom.[1]

In eighteenth-century London, the royal morning receptions that the French called levées were called "drawing rooms", with the sense originally that the privileged members of court would gather in the drawing room outside the king's bedroom, where he would make his first formal public appearance of the day.

During the American Civil War, in the White House of the Confederacy in Richmond, Virginia, the drawing room was just off of the parlor where C.S.A. President Jefferson Davis would greet his guests. At the conclusion of these greetings, the men would remain in the parlor to talk politics and the women would withdraw to the drawing room for their own conversation. This was common practice in the affluent circles of the Southern United States. 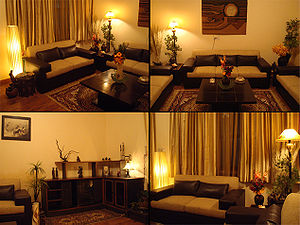 The term drawing room is not used as widely as it once was, and tends to be used in Britain only by those who also have other reception rooms, such as a morning room, a nineteenth-century designation for a sitting-room, often with east-facing exposure, suited for daytime calls, or the middle-class lounge, a late nineteenth-century designation for a room in which to relax; hence the drawing room is the smartest room in the house, usually used by the adults of the family when entertaining. Though this term is still widely used in India and Pakistan, probably since the colonial days, in the larger urban houses of the cities where there are many rooms.

The American equivalent was the parlor, or as many would later call it, living room. In French usage the room and the social gathering it contained are equally the salon.

The term has also been applied to passenger trains, supplanting parlor car, to designate some of the most spacious and expensive private accommodations available on board a sleeping car or private railroad car. In North America, it meant a room that slept three or more, with a private washroom. While Amtrak has retired cars built with drawing rooms, they are currently still used by Via Rail Canada, although the traditional nomenclature is seen as archaic and are officially sold as "triple bedrooms".

Drawing room comedy typically features wit and verbal banter among wealthy, leisured, genteel, upper class characters. Drawing room comedy is also sometimes called the "comedy of manners." Oscar Wilde's The Importance of Being Earnest and several of the plays of Noel Coward are typical works of the genre. George Bernard Shaw's Heartbreak House adds an undercurrent of social criticism to the genre. Cary Grant appeared in a number of filmed drawing-room comedies. Ernst Lubitsch was especially known as a director of drawing-room comedies.