Manchester Central Library is a circular library south of the extended Town Hall in Manchester, England. It acts as the headquarters of the Manchester Library & Information Service, which also consists of 22 other community libraries.

Designed by E. Vincent Harris, the library was constructed between 1930 and 1934, but because of its traditional neoclassical architecture it is often mistakenly thought to be much older. At its opening one critic wrote "This is the sort of thing which persuades one to believe in the perennial applicability of the Classical canon".[1] The form of the building, a columned portico attached to a rotunda domed structure, is loosely derived from the Pantheon, Rome.

The library building is grade II* listed.[2] In 2011, a three year project to renovate the library was started. Reconstruction will cost £170m and the library will be closed until 2014.[3]

Designed by architect E Vincent Harris, the striking rotunda form of the Manchester Central Library was inspired by the Pantheon in Rome. Like its 2nd-century model, the library is a round building fronted by a large portico. This two-storey portico forms the main entrance on St. Peter's Square, and is surrounded by five bays of Corinthian columns. Around the second and third floors is a Tuscan colonnade, topped by a band of unrelieved Portland stone.

The pitched leaded roof appears from street level to be a dome, but this is only a surrounding roof. The dome that can be seen from within the Great Hall lies within this roof, and cannot be seen from the ground.[4]

Harris took much of his inspiration for the interior design from new trends in library design in the United States.[4]

On the first floor is the Great Hall, a large reading room topped by a dome. Much of the original furniture designed by the architect can be seen on this floor. Around the rim of the dome is an inscription from the Book of Proverbs in the Old Testament:[4]

In former years the dome's acoustics caused an echo problem, which repeated several times any short noise made in the room. Adding sound-absorbing material has made this echo much less. 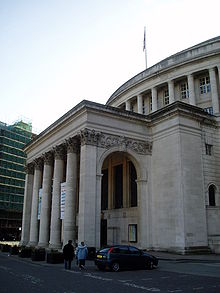 The Shakespeare Hall is an ornate chamber displaying local heraldry and with large stained glass windows. The central window was designed by Robert Anning Bell and depicts William Shakespeare and scenes from his plays. Two side windows designed by George Kruger Gray depict the coats of arms of the City of Manchester, the University of Manchester, and the County and Duchy of Lancaster. The windows were a memorial bequest to the library by Rosa E. Grindon (1948-1923), the widow of Manchester botanist Leo Grindon.[5][6]

On the left landing is a white marble statue, the Reading Girl by the Italian sculptor Giovanni Ciniselli. It was bought by the industrialist and promoter of the Manchester Ship Canal, Daniel Adamson. The statue was presented to the library by his grandchildren, the Parkyn family, in 1938.[4]

Beneath the Great Hall lie four floors of book stacks providing 35 miles of shelving which accommodate one million books.[7] The floors are only accessible to employees and are environmentally controlled to protect books, many of which are old and in a fragile condition.[7]

Central Library opened in 1934 to much fanfare. Famous singer-songwriter Ewan MacColl reminisced on the opening of the new library: The new Central Library which replaced the chicken house was an imposing circular structure with an enormous reading room, a small theatre and carrels where serious students could carry on their research without interruption. The portico of the magnificent edifice quickly became a popular rendezvous and "Meet you at the Ref" became a familiar phrase on the lips of students, lovers and unemployed youths. I was there on the opening day and on many days thereafter; the Ref played an important part in my life for I made many friends there.[8]

The library was declared open by King George V on 17 July 1934.[9] George V declared to the crowd: "In the splendid building which I am about to open, the largest library in this country provided by a local authority, the Corporation have ensured for the inhabitants of the city magnificent opportunities for further education and for the pleasant use of leisure."[9]

An employee at the library who was present on opening day said: "When it was being built the public were very intrigued about its final appearance - they were used to rectangular buildings and the shape of the girders used seemed to make little sense. I remember families coming in first to "gawp" ... Under the portico became a favourite trysting place. In all, the shape of the building was its best advertisement and it was never necessary to put a notice 'Public Library' on the outside."[10]

Reports emerged in 2008 that the Central Library needed essential renovation to repair and modernise facilities.[11] The Library faced asbestos problems and needed work to maintain its `structural integrity'.[11]

The Library is closed from 2010 to 2013 for major refurbishment and expansion. Some of its services will be available at a temporary location nearby.[12] - A new community library for the city centre on Deansgate is planned.[13] The community library occupies Elliott House (between Lloyd Street and Jackson's Row). During the closure its books are stored in a disused part of the Winsford salt mine.

There are four tiers of steel book stacks in the building. The first level is just underneath the Great Hall and the fourth level, the Archive unit, is in the basement of the building. There are 3,600 stack columns supporting approximately 45,000 shelves. Placed end to end, they would cover a distance of over 35 miles (56 km). The total floor area is about 7,000 square yards (5,850 m2) .[4]

Central Library capped in snow during the Big Freeze

A number of famous figures have been associated with Central Library. One of Manchester's most famous sons, the conductor Sir John Barbirolli, was a regular user of the Music Library. Anthony Burgess, the famous novelist who wrote the cult classic A Clockwork Orange, was a regular visitor to the library during his school days. In a volume of his autobiography, Little Wilson and Big God (1987) he recounted his seduction by a librarian in the card catalogue. Morrissey, former lead singer of The Smiths, also studied in the library for his A Level exams. Having once tried to use the Language & Literature Library for an unofficial photo session, he was asked to leave by the librarian who did not know who he was.[15]