In audio signal processing and acoustics, an echo (plural echoes) is a reflection of sound, arriving at the listener some time after the direct sound. Typical examples are the echo produced by the bottom of a well, by a building, or by the walls of an enclosed room and an empty room. A true echo is a single reflection of the sound source. The time delay is the extra distance divided by the speed of sound. The word echo derives from the Greek ἠχώ (ēchō),[1] itself from ἦχος (ēchos), "sound".[2]

If so many reflections arrive at a listener that they are unable to distinguish between them, the proper term is reverberation. An echo can be explained as a wave that has been reflected by a discontinuity in the propagation medium, and returns with sufficient magnitude and delay to be perceived. Echoes are reflected off walls or hard surfaces like mountains and privacy fences. 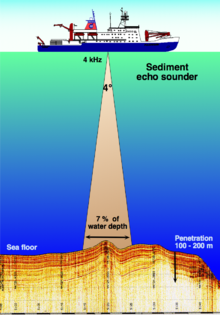 This illustration depicts the principle of sediment echo sounding, which uses a narrow beam of high energy and low frequency

When dealing with audible frequencies, the human ear cannot distinguish an echo from the original sound if the delay is less than 1/10 of a second. Thus, since the velocity of sound is approximately 343 m/s at a normal room temperature of about 20°C, the reflecting object must be more than 17.15 m from the sound source at this temperature for an echo to be heard by a person at the source.

Sound travels approximately 343 metres/s (1100 ft/s). If a sound produces an echo in 2 seconds, the object producing the echo would be half that distance away (the sound takes half the time to get to the object and half the time to return). The distance for an object with a 2-second echo return would be 1 sec X 343 metres/s or 343 metres (1100 ft). In most situations with human hearing, echoes are about one-half second or about half this distance, since sounds grow fainter with distance. In nature, canyon walls or rock cliffs facing water are the most common natural settings for hearing echoes.The strength of an echo is frequently measured in dB sound pressure level SPL relative to the directly transmitted wave. Echoes may be desirable (as in sonar) or undesirable (as in telephone systems).

Some information from Federal Standard 1037C and from MIL-STD-188.

In music performance and recording, electric echo effects have been used since the 1950s. The Echoplex is a tape delay effect, first made in 1959 that recreates the sound of an acoustic echo. Designed by Mike Battle, the Echoplex set a standard for the effect in the 1960s and was used by most of the notable guitar players of the era; original Echoplexes are highly sought after. While Echoplexes were used heavily by guitar players (and the occasional bass player, such as Chuck Rainey, or trumpeter, such as Don Ellis), many recording studios also used the Echoplex. Beginning in the 1970s, Market built the solid-state Echoplex for Maestro. In the 2000s, most echo effects units use electronic or digital circuitry to recreate the echo effect. 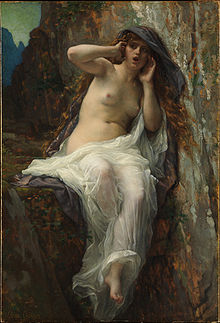 In Greek mythology, Echo (Greek: Ηχώ) was the personification of echo. According to Greek mythology Echo was a Nymph who had the job of talking incessantly to Hera, the Queen of the Gods, so that her husband, Zeus, would not get caught in his numerous affairs. Hera caught on to Echo's trick and cursed her to only be able to say what others had just said — hence the word "echo".

"A duck's quack doesn't echo" is a much-quoted scientific myth. The truth is that a duck's quack does, in fact, echo; however, it may be difficult to hear. This myth was first debunked by the Acoustics Research Centre at the University of Salford in 2003 as part of the British Association's Festival of Science. It was also featured in one of the earlier episodes of the popular Discovery Channel television show MythBusters. The actual reason for the myth is that a quack is a quiet and fading sound which produces faint echoes.