Northern England, also known as the North of England, the North or the North Country, is a cultural region of England. It is not an official government region, but rather an informal amalgamation of counties. The southern extent of the region is roughly the River Trent,[4] while the North is bordered by Scotland. The counties of Northern England combined have a population of around 14.5 million covering an area of 37,331 km2 (14,414 sq mi).

During antiquity most of the area was part of Brigantia — homeland of the Brigantes and the largest Brythonic kingdom of Great Britain. After the Roman conquest of Britain the city of York became capital of the area, called Britannia Inferior then Britannia Secunda. In Sub-Roman Britain new Brythonic kingdoms of the Hen Ogledd emerged. The Angle settlers created Bernicia and Deira from which came Northumbria and a Golden Age in cultural, scholarly and monastic activity, centered around Lindisfarne and aided by Irish monks.[5] Norse and Gaelic Viking raiders gained control of much of the area, creating the Danelaw. During this time there were close relations with Mann and the Isles, Dublin and Norway. Northumbria was unified with the rest of England under Eadred around 952.

After the Norman conquest in 1066, desolation was brought with the Harrying of the North, though much construction and town founding was done shortly after. A Council of the North was in place during the Late Middle Ages until the Commonwealth after the Civil War. The area experienced Anglo–Scottish border fighting until the unification of Britain under the Stuarts.

Concepts of the North take account of perceived "Northern" regional accents. Experts on historical dialects categorise as Northern the area north of a line that begins at the Humber estuary, and runs up the river Wharfe and across to the River Lune in north Lancashire.[6] However, the linguistic elements that traditionally defined this area, such as use of doon instead of down and substitution of an -ang noise in words that end -ong (e.g. lang instead of long), are now only prevalent in the more northern parts of the region; these linguistic features may reflect a more modern interpretation of where the line sits today. As speech has changed, there is little consensus on what defines a "Northern" accent or dialect. Many people in Northern England omit certain words from sentences in casual speech, such as saying "I'm goin t'shops" or "I'm going the shops" as opposed to "I'm going to the shops". This is particularly common in Yorkshire and Lancashire.[citation needed]

The North of England may also be considered as the area (from coast to coast) surrounding the Pennines, an upland chain often referred to as "the backbone of England". This stretches from the Cheviot Hills on the border with Scotland to the Peak District. The areas defined were formerly dominated by heavy industry and mineral extraction and processing. Combined with the characteristically wild, hilly landscape of the region, this has led to the popular conception, mainly by those from the south of England, of it being "grim up North".

It is an area of extreme landscapes. There are several belts of urbanisation, many of which form one larger belt that runs from Liverpool to Leeds along the M62 corridor, then heading south to Sheffield along the M1 corridor. There are further agglomerations in the North East and east of Preston. Around eleven million people live in the area covered by The Northern Way, most in its largest cities Leeds, Sheffield, Liverpool, Bradford and Manchester.

The North might also be considered to include the three former Government Office Regions of North East England, North West England and Yorkshire and the Humber. This area consists of the ceremonial counties of Cheshire, Cumbria, County Durham, East Riding of Yorkshire, Greater Manchester, Lancashire, Merseyside, Northumberland, North Yorkshire, South Yorkshire, Tyne and Wear, West Yorkshire and part of Lincolnshire. The regions also hold the North of England Inward Investment Agency which is a UK government sponsored agency that represents two Regional Development Agencies in North England: Northwest Regional Development Agency (NWDA) and One Northeast (ONE).

Alternatively, the North might be considered to comprise the six ancient counties of Cumberland, Northumberland, Westmorland, Durham, Lancashire and Yorkshire. The eastern part of this region coincides with the old Kingdom of Northumbria apart from those areas which were later absorbed into Scotland.

Northern England is sometimes defined to coincide with the ecclesiastical Province of York, which is overseen by the Archbishop of York. The See includes the Isle of Man, which in ecclesiastical terms is the see of Sodor and Man and was at one time a part of Jorvik in contention with Dublin over said island and Galloway. A comparable definition in Roman Catholic terms would be the Province of Liverpool.[7]

Angel of the North

The term "northern" is often loosely used without any deeper consideration of the geographical identities of northern England, leading to confusion over the depth of affiliation between its areas. People from areas of the Midlands, such as Stoke-on-Trent, will occasionally choose to identify as "northerners".

As in much of the rest of England, people tend to have a deeper affiliation to their county or their city. Thus, Yorkshire people have a traditional rivalry with people from Lancashire, even though people from both areas recognise a shared "Northern" identity. Similarly, there is a strong distinction between natives of Sunderland (Mackems) and those of Newcastle (Geordies).

The sport of rugby experienced a schism in 1895 with many teams based in Yorkshire, Lancashire and surrounding areas breaking from the Rugby Football Union and forming their own Rugby League. The disagreement that led to the split was over the issue of professional payments, and "broken time" or injury payments.

The North formed a powerful Rugby Union team in the 70's, 80's and 90's who famously won games against the New Zealand All Blacks and the Australian Wallabies. Former players include Bill Beaumont, Will Carling & Rory Underwood, but more recently has seen the regions teams become relatively weaker, with association football, cricket and Rugby League being cited as more popular across the region.[8] 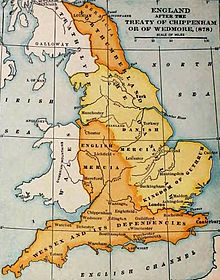 The Romans called an area similar to northern England "Britannia Inferior" (Lower Britain) and it was ruled from the city of Eboracum (modern York). The Brigantes occupied the region between the rivers Tyne and Humber. The sub capital held sway over the rest of the land north of there, which included for a brief period the part of the Scottish lowlands between Hadrian's Wall and the Antonine Wall.

After the arrival of the Angles, Saxons and Jutes, the North was divided into rival kingdoms: Bernicia and Deira. Bernicia covered lands north of the Tees, whilst Deira corresponded roughly to the eastern half of modern-day Yorkshire. Bernicia and Deira were first united as Northumbria by Aethelfrith, a king of Bernicia who conquered Deira around the year 604. An area east and west of the Pennines was divided into two Celtic kingdoms, Rheged (Cumbria and Lancashire) and Elmet (West Riding of Yorkshire). The north of England forms a large part of the Hen Ogledd, Welsh for 'Old North'. The north west of England still retains vestiges of a Celtic culture, and had its own Celtic language, Cumbric, spoken, predominately in Cumbria until around the 12th century.

The North and East of England was subject to Danish Law (Danelaw) during the Viking era, evidence of which can be found in the etymology of many place names and surnames in the area. Anglo-Norman aspirations in the Pale of Ireland have some roots in the Viking forays on the Irish Sea and the trade route which ran from York and crossing the Edinburgh-Glasgow area in Scotland, to Dublin in Ireland.

Historically the North was controlled from London by the Council of the North, based at the King's Manor, York, set up in 1484 by Richard III. However the major decisions affecting the North of England have been made entirely in London since this institution was abolished in 1641.

As the centre of the industrial revolution, Northern England has long been characterised by its industrial centres, from the mill towns of Lancashire, textile centres of Yorkshire, shipyards of the North East to the mining towns found throughout the North and the fishing ports along both east and west coasts. However, whilst much of the South and east of England has in general prospered economically, the north and west have remained relatively poor, consequently there are currently many government subsidised urban regeneration projects happening across northern towns and cities, hoping to exploit the lack of private investment in the area. Five of the ten most populous cities in the United Kingdom lie in the North.

The picture is not clear-cut, however, as the north has areas which are as wealthy as, if not wealthier than, fashionable southern areas such as Surrey. Yorkshire's "Golden Triangle" which extends from north Leeds to Harrogate and across to York is an example, as is Cheshire. Equally, counties such as Cornwall share the relative economic deprivation often associated with the North. 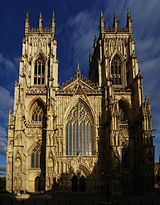 Christianity is the largest religion in Northern England and has been since the Early Middle Ages, though its existence on the island dates back to the Roman introduction in antiquity and continued through Early Insular Christianity. The Holy Island of Lindisfarne played an essential role in the Christianisation of Northumbria, after Aidan from Connacht founded a monastery there as the first Bishop of Lindisfarne on the request of King Oswald.[9] It is known for the creation of the Lindisfarne Gospels and remains a site of pilgrimage to this day.[10][11] Paulinus as part of the Gregorian mission became the first Bishop of York. It was at the Synod of Whitby that calucations of Easter were brought in line with Roman calculations. In the modern day the three main forms of Christianity practised are Anglicanism, Latin Rite of the Catholic Church and Methodism. In terms of ecclesiastical administration for the Church of England the entire north is covered by the Province of York, which is represented by the Archbishop of York. Likewise, with the exception of old Cheshire the north is covered in Catholic Church administration by the Province of Liverpool represented by the Archbishop of Liverpool.