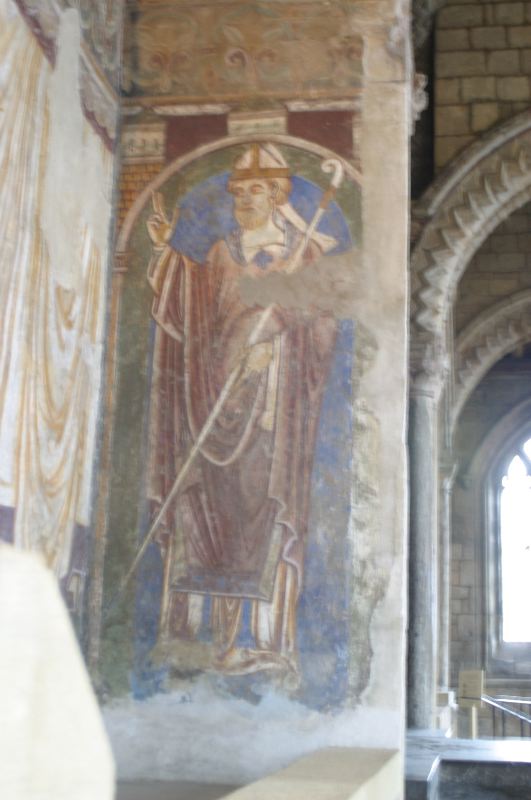 St Cuthbert of (c. 634&ndash; ) was an Anglo-Saxon and in the which at that time included, in modern terms, north east and south east as far as the . Afterwards he became one of the most important s of England, with widespread recognition in the places he had been in Scotland.

Cuthbert is regarded as the of and a patron of England.

Cuthbert was of Northumbrian origin, probably from the neighbourhood of at the mouth of the in modern-day . While still a boy, employed as a , one night he had a vision of the soul of Aidan being carried to heaven by s and thereupon went to the of Old Melrose and became a monk (651). Soon afterwards, however, he became a for several years.

After his return to the monastery, his fame for piety, diligence, and obedience quickly grew. When Alchfrith, king of Deira, founded a new monastery at , Cuthbert became its "praepositus hospitum" or visitors' host.

Alchfrith, however, adopted returned to Melrose. Illness struck the monastery in 664 and while Cuthbert recovered, the died and Cuthbert was made prior in his place.

After the , Cuthbert seems to have accepted the Roman customs, and his old abbot, , called on him to introduce them at Lindisfarne. This was an ungrateful task, but Cuthbert disarmed opposition with his loving and patient nature.

His ism was complemented by his charm and generosity to the poor, and his reputation for gifts of healing and insight led many people to consult him, gaining him the name of "Wonder Worker of Britain". He continued his missionary work, travelling the breadth of the country from to to carry out pastoral work and founding an oratory at Dull, Scotland complete with a large stone cross, and a little cell for himself, at a site which subsequently became a monastery then later the .

In 676 he adopted the solitary life and retired to a cave. After a time he settled on one of the , south of , and gave himself more and more to austerities. At first he would receive visitors and wash their feet, but later he confined himself to his cell and opened the window only to give his blessing. While on the Farne Islands, he instituted special laws to protect the Eider ducks and other seabirds nesting on the islands; these may have been the first bird protection laws anywhere in the world. Consequently, eider ducks are often called "cuddy ducks" (Cuthbert's ducks) in modern Northumbrian dialects.

Election to the bishopric of Lindisfarne

In 684, Cuthbert was elected , at a synod at Twyford (believed to be present-day ) [ [http://books.google.com/books?vid=OCLC26375199&id=s47SQJS-ekMC&pg=PA504&lpg=PA504&dq=alnmouth&as_brr=1#PPP5,M1 The Gentleman's Magazine] , volume XXXVIII, 1852 page 500 from ] , but was reluctant to leave his retirement and take up his charge; it was only after a visit from a large group, including king Ecgfrith, that he agreed to return and take up the duties of bishop. He was consecrated at by Archbishop Theodore and six bishops, on . After , 686, however, he returned to his cell on Inner Farne Island (two miles from , ), which was where he eventually died. He was buried at Lindisfarne.

Legend had it that when Cuthbert's burial casket was opened a couple of years after his death his body was found to have been perfectly preserved (see ). [ [http://www.newadvent.org/cathen/04578a.htm St Cuthbert] , ] This apparent miracle led to the steady growth of Cuthbert's posthumous , to the point where he became the most popular saint of Northern England. Numerous s were attributed to his intercession and to intercessory near his remains. The noted 8th century author wrote both a verse and a prose life of St Cuthbert around 720. He has been described as "perhaps the most popular saint in England prior to the death of in 1170." [Dominic Marner, "St. Cuthbert: His Life and Cult in Medieval Durham" (2000), page 9.]

In 875 the Danes took the monastery of Lindisfarne and the monks fled, carrying with them St Cuthbert's body around various places including Melrose.

In 1104 Cuthbert's tomb was opened again and his translated to a new behind the of the recently completed Cathedral. When the casket was opened, a small book of the gospels, measuring only three-and-a-half by five inches, now known as the , was found. It was also discovered that his was made of Byzantine "Nature Goddess" silk, indicating the extent of the trade at this time. [Dr G.R. Jones, [http://www.le.ac.uk/elh/grj1/asw.html Anglo-saxon England and the Wider World] ] His shrine was destroyed in the , but, unusually, his relics survived and are still interred at the site (although they were also disinterred in the 19th century, when his wooden coffin and various relics were removed).

, a college-level body at the is named after him. The only society in the world, it is located only a short walk from the coffin of the saint at Durham Cathedral. The Society celebrates St Cuthbert's Day on or around March 20 with a magnificent feast. "Cuth's Day", the annual college day, is celebrated in the epiphany term with music, entertainment, festivities and drinking. St Cuthbert is also the namesake of St Cuthbert's College in , which celebrates St Cuthbert's Day on March 20 as a day of school celebration. The school's houses are named after important locations in the life of the Saint: Dunblane (Yellow), Elgin (Green), (Purple), Kelso (Blue), (White) and Melrose (Red).

opened its first shop in in 1859, and expanded to become one of the largest Co-ops before amalgamating with the "Dalziel Society of Motherwell" in 1981 and being renamed Scotmid. Its dairy used horse drawn delivery floats until 1985, and between 1944 and 1959 employed as a milkman one , who later went on to fame as . Many churches are named for Cuthbert. An Orthodox Community in , England has taken St. Cuthbert as their patron. [ [http://www.stcuthbertsorthodoxcommunity.co.uk St Cuthbert's Orthodox Community website] ]

s extracted from limestone quarried on Lindisfarne, or found washed up along the foreshore, which were threaded into necklaces or rosaries, became known as .

In Northumberland the is known as the Cuddy Duck, after St Cuthbert who protected them on the . They still breed in their thousands off the Northumberland Coast. [ [http://www.bbc.co.uk/radio4/science/livingworld_20020303.shtml BBC - Radio 4 - The Living World: The Eider Duck ] ]

St Cuthbert and the "haliwerfolc"

During the medieval period, St Cuthbert became politically important in defining the identity of the people living in the semi-autonomous region known as the Palatinate of . Within this area the had almost as much power as the king of himself, and the saint became a powerful symbol of the autonomy the region enjoyed. The inhabitants of the Palatinate became known as the "haliwerfolc", which roughly translates as "people of the saint", and Cuthbert gained a reputation as being fiercely protective of his domain. [G.T. Lapsley, "The County Palatinate of Durham" (1900)] For example, there is a story that at the in 1346, the Prior of the Abbey at Durham received a vision of Cuthbert, ordering him to take the cloth of the saint and raise it on a spear point near the battlefield as a banner. Doing this, the Prior and his monks found themselves protected "by the mediation of holy St Cuthbert and the presence of the said holy Relic." ["The Rites of Durham, being a Description or Brief Declaration of All the Ancient Monuments, Rites and Customs belonging or being within the Monastical Church of Durham before the Suppression, written 1593", ed. J. T. Fowler (Surtees Society 107, 1902)] Whether the story of the vision is true or not, the banner of St Cuthbert was regularly carried in battle against the Scots until the Reformation, and it serves as a good example of how St Cuthbert was regarded as a protector of his people.