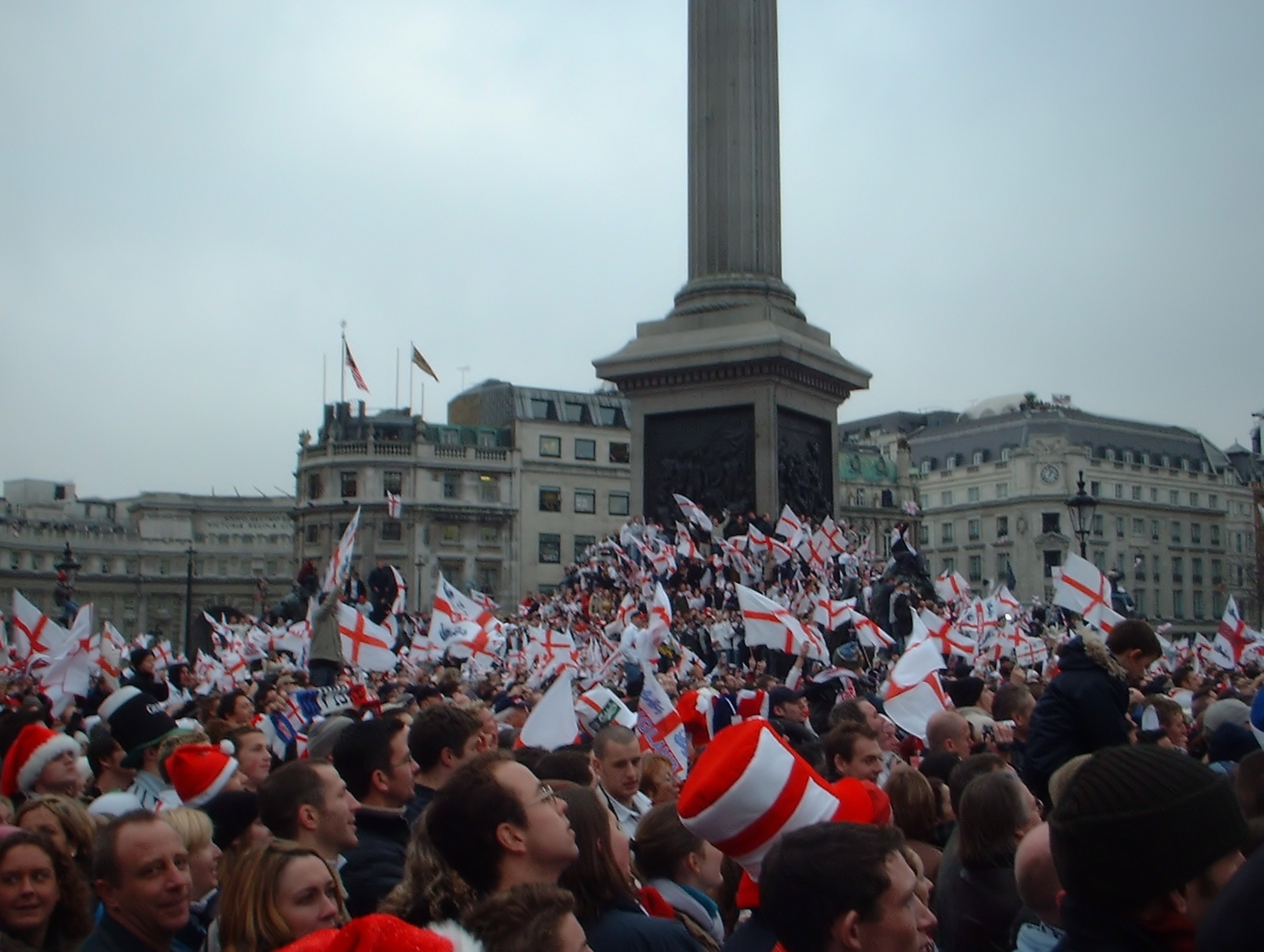 is one of the leading professional and recreational team sports in England. Rugby is thought to have been created in England in 1823, when picked up the ball and ran with it during a football match at the . In 1871 the RFU was formed by 21 clubs, and the first international match, which involved England, was played in Scotland. The English national team compete annually in the , and are former world champions after winning the . The top domestic club competition is the , and English clubs also compete in international competitions such as the .

Rugby in England is generally attributed to when "who with a fine disregard for the rules as played in his time, first took the ball in his arms and ran with it" in 1823 at the , although modern scholars consider that this story may be a myth. One of the earliest football clubs formed, some claim it to actually be the first, is the which was founded in 1843 in , , . The club played an early version of rugby football and was formed by old boys of the Rugby School. Subsequent clubs established in this period include Dublin University Football Club in 1854 and the in 1858.

Football Association meeting and the subsequent forming of the RFU

was formed at the Freemason's Tavern, Great Queen Street, on , London on , with the intention to include the most acceptable points of play under the one heading of football. However, disagreements over what was being excluded led the Blackheath Club to withdraw from the association which was followed by a number of other clubs. In 1870, published an invitation in the newspapers which read "Those who play the rugby-type game should meet to form a code of practice as various clubs play to rules which differ from others, which makes the game difficult to play". In January of the following year, 21 clubs meet at the and the (RFU) was founded.

First international and the schism in rugby

On , , the first ever international match took place, involving the English rugby team and the Scottish. Scotland won the match, which was played at in . In 1884, England opted not to join the which was formed by Ireland, Scotland and Wales, as they thought they should have greater representation on the board as they have the larger number of clubs.

By the late 1800s, the issue over in rugby had become important, particularly in the North of England, where a larger working class played rugby compared to the south, thus their work and injuries they received whilst playing came into conflict with the rules of amateurism. With mounting pressure regarding player payments and veiled professionalism, on , at a meeting at the George Hotel, Huddersfield, 21 clubs met to form the Northern Rugby Football Union and thus resigned from the RFU.

During this period, rugby was played between counties similar to the system of first-class cricket in England now. In 1907, won the county tournament and went on to represent Britain at . As the system was not particularly popular it soon ended.

All amateur leagues were outlawed by the Rugby Football Union in September 1900.

The 1910 opening of the RFU's new home at Twickenham heralded a golden era for English rugby union. During the , the Five Nations Championship became suspended in 1915 and it was not resumed until 1920. One hundred and thirty three international players were killed during the conflict. In 1923, a century of rugby was celebrated at the Rugby School, which saw an England and Wales XV play a Scottish-Irish team.

For duration of the ban on rugby league players was temporarily lifted by the RFU. Many played in the eight rugby "Internationals" between England and Scotland which were played by Armed Services teams. The authorities also allowed the playing of two “Rugby League vs. Rugby Union” fixtures as fundraisers for the war effort. In 1958, long after the William Webb Ellis had become engraved as a legend in the history of rugby union, his grave was finally located by in the French town of near the border with .

The RFU had long resisted leagues competitions, as it was thought that they would encourage player payments, thus most club matches were only organised friendlies, with competitions such as the County Cups and County Championship existing also. In 1972 the RFU sanctioned a knock-out competition now known as the . The league evolved over time since starting in 1987 when the Courage Leagues were formed, a league pyramid that had more than 1000 clubs playing in 108 leagues; each with promotion and relegation.

The Heineken Cup was formed in 1995 as a competition for twelve European clubs. Today the competition fields sides from England, France, Wales, Ireland, Scotland and Italy. The century old competition for the European rugby powers became the Six Nations Championship in 2000 with the addition of Italy.

The Rugby Football Union are the governing body for rugby union in England.

The 12-team is the top level of competition, it is fully professional but has a salary cap in place. and are the next rungs down. National Division One has some fully professional sides but most are semi-professional. Below this there are many regional leagues. Attendances at club rugby in England have risen strongly since the sport went professional. Some clubs have good all seater grounds in the 10,000-25,000 capacity range; some have older grounds which are still partly terraced, and others play in council-owned joint-use stadia. Some clubs rent stadia from football clubs.

See: A summary of English leagues.

The is a European club a regional competition between the best teams from England, France, Ireland, Wales, Scotland and Italy. It is viewed by some as the top prize in European rugby for all teams.

The is the English school's cup competition. The final is held at . Competitions are held at the U18 and U15 age group levels. At each age group there are two competitions, a cup for the better schools and a vase for lesser schools.

The is the premier club-level event held in England (note, however, that international sides have taken part on occasion).

National sevens teams compete annually in the at Twickenham, which is the next-to-last event in each year's .

The following games are considered derbies.

Rugby's recent success is in part due to England's recent 2003 Rugby World Cup success. In terms of average attendance, the Guinness Premiership is the third best attended club competition in England behind The Premiership and The Championship. The highest club attendances at matches are starting to become similar to some of the lower attended matches in football's Championship, with game attendances now averaging at 10,000 compared with 17,000 in the football Championship (figures from season ending 2005). Some teams- such as Sales Sharks- have (or plan to) move to new, bigger capacity stadiums. Others such as Bath are planning make extensions to their existing stadium.

Historically rugby union was a participatory sport rather than a spectator sport in England and attendances at club games were low. for example averaged less than a hundred spectators in the 1970s. However, attendances at Twickenham for the national team have always been very high. Games in the and have always been shown on network TV. Many people watch these games but don't follow club rugby, mainly due to the fact that the pay-TV Sky Sports owns the rights to the game broadcasts, and highlights are rarely shown on network television. The average England rugby fan is not necessarily very knowledgeable as a consequence, many people watch national games with little knowledge of the laws of the game.

Rugby union has often been considered, somewhat pejoratively, a 'posh' game. This may be historically linked to the split between Northern teams and the rest of the rugby fraternity over 'broken time payments', i.e. professionalism. This split led to the development of the separate sport of .

The amateur ethos made it difficult for players who could not afford to take time off work to play away games or to go on tour - an integral part of the rugby tradition. Rugby union in many parts of England is associated with fee-paying independent schools such as or who have historically provided many of the national players. It is also commonly played at , but in much of the country tend not to play the game. Research from 2003 stated that the majority of spectators are from the AB1 demographic group with a gender ratio of approximately 80% male and 20% female at live domestic professional matches. [http://www.trilinesports.co.uk/sunion.php] However, this is a general picture of the sport across the country as a whole and, in some parts of the country, the game has widespread grassroots support. This is particularly true of the Westcountry, especially in and in the cities of Bath and , where the game is substantially more popular than football without significant class differentiation fact|date=April 2008. In the Midlands, the game competes with football and the larger clubs, such as , and Coventry, have considerable fanbases and strong traditions.

Due to the split with most of the Yorkshire and Lancashire clubs, rugby union remained more popular in the South and the Midlands than the North of England, although an outpost in the North East remained, such as through the Gosforth, and Northern clubs. This is changing somewhat with the relative success of and . Although four of the teams in the Premiership have historic links with London, three of these have now moved to neighbouring towns, and only Harlequins now play in the capital albeit in the outer suburb of Twickenham. At an amateur level, however, rugby remains strong in the London area.

Both the Welsh and Scottish Rugby Unions have expressed an interest in establishing teams in , most probably the existing and clubs. The English RFU has not yet responded.

Following England Rugby's success with capturing the , popularity of in practically doubled according to research that was conducted as part of ’s SportsTracker.

Prior to the 2003 World Cup, research estimated that around 18 per cent of all British citizens had an interest in rugby union (conducted in January 2003), ranking the sport eighth in popularity in England. In December 2003, shortly after England's win at the World Cup, the percentage was revealed to be 27 per cent, pushing the sport to second in England.

Whilst was officially an amateur sport, many rugby union players came to play rugby league. In recent years this trend has reversed and some rugby league players have crossed codes to play union. [http://news.bbc.co.uk/sport1/hi/rugby_union/5343720.stm]

England have enjoyed success from time to time with more titles and Grand Slams than any other nation. England contest the with Scotland and the with Ireland as part of the Six Nations Championship. They were World Champions from 2003-2007 and also made the finals of the 1991 and 2007 World Cups. The IRB currently ranks England at 5th out of 95 union-playing countries. They play their home games at Twickenham in . is a song associated with the national rugby union team even though it was originally sung by black slaves on the cotton fields in the south of the U.S.A. Every four years the go on tour with players from England as well as Ireland, Scotland and Wales.