The Hadfield and Glossop Line is a railway line in North West England, connecting Manchester with Glossop and Hadfield in Derbyshire. Passenger services on the line are currently operated by Northern Rail.

The line is the surviving section of the Woodhead Line, which was electrified in the early 1950s but passenger services east of Hadfield were withdrawn in 1970, followed by complete closure in 1981. Hattersley was opened in 1978, around 750m east of the then Godley, to serve the 1960's Hattersley estate, and in 1985 the Flowery Field and Godley stations were built (Godley around 500m west of the original Godley station, then renamed Godley East). These two stations (along with Ryder Brow on the Hope Valley Line) were built to a minimum standard, using hollow wooden structures compared the more grandiose stonework of original stations like Newton for Hyde or Glossop. Godley East was then closed in 1986, effectively being replaced by the newer Godley and Hattersley.

In December 1984, the Manchester - Glossop/Hadfield line electrification was converted from 1500 V dc to 25kV ac. Class 303 EMUs took over from the veteran Class 506 units. The 303s later returned to the Glasgow area and were in turn replaced by Class 304 and Class 305 units before the more modern Class 323 units were introduced to the line in November 1997.

Other than Manchester Piccadilly, the busiest station on the line is Glossop.[citation needed] 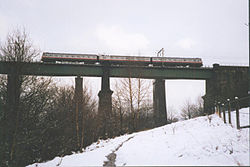 The line serves the following places:

The same train serves Glossop and Hadfield via one of three routings:

The line also includes a closed station - on the line at Godley East. This station was originally Godley Junction and was renamed Godley when the line to Stockport was closed. The station became Godley East when the current Godley station was built slightly west in the 1980s.

There are also remnants of a platform and shelter near Gamesley, between Broadbottom and Dinting. Known as Mottram Staff Halt, it served the former Mottram Goods Yard. There are at present proposals to construct a small station for Gamesley, funding permitting, implemented in Control Period 4 (2009–2014)[citation needed].

In the early 1980s, proposals were put forward to convert the Glossop Line to light rail operation for the proposed Manchester Metrolink system. While construction of Metrolink went ahead, the Glossop line was not included in the system, and no further plans to add the line have been proposed.[1]

Other potential changes include raising the linespeed around Dinting triangle from the present 10 mph-40 mph to 10 mph-50 mph, and the linespeed from Guide Bridge to Dinting from 60 mph to "up to 90mph". Raising the linespeed will help the same number of units to work a 4tph (train per hour) service when they currently can only work 3tph, and incidentally avoids platform lengthening that would otherwise be necessary. New turnback facility would be provided (with associated OHLE works) in the Broadbottom/Gamesley area.

A new facility to stable 20 vehicles at Guide Bridge, will be required for new vehicles to arrive as part of the DfT Rolling Stock Plan.[2]