The Borough of Milton Keynes is a unitary authority and borough in south central England, at the northern tip of the South East England Region. For ceremonial purposes, it is in the county of Buckinghamshire. It is the most northerly district of the South East region.

It borders the non-metropolitan counties of Buckinghamshire (the area under the control of Buckinghamshire County Council), Bedfordshire and Northamptonshire. The principal settlement in the borough is Milton Keynes itself, which accounts for about 33% of its area and 90% of its population.

It was originally one of five non-metropolitan districts of Buckinghamshire, but on 1 April 1997, under a recommendation of the Local Government Commission for England it became a self-governing unitary authority, independent from Buckinghamshire County Council. The borough however remains part of Buckinghamshire for ceremonial purposes.

Milton Keynes council is under no overall control and is currently governed by a Conservative minority administration. The Liberal Democrats party is currently the main opposition group.

The political composition for the council is as follows.

This is a table of trend of regional gross value added (GVA) of Milton Keynes at current basic prices published (pp. 240–253) by Office for National Statistics with figures in millions of British Pounds Sterling (except GVA index).

^ 1 Components may not sum to totals due to rounding

The urban area accounts for about 33% of the Borough by area and 90% by population. This is a partial list of the districts of Milton Keynes itself. For a discussion of the usage of the term "city" in Milton Keynes, see History of Milton Keynes. 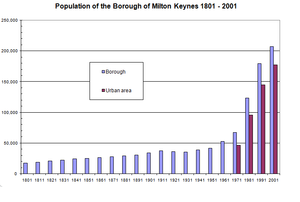 Rest of the borough

The rural area accounts for about 66% of the Borough by area and about 10% by population. These are the extra-urban civil parishes: