New towns in the United Kingdom

New towns in the United Kingdom 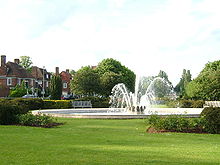 Welwyn Garden City, one of the early new towns

Below is a list of some of the new towns in the United Kingdom created under the various New Town Acts of the 20th century. Some earlier towns were developed as Garden Cities or overspill estates early in the twentieth century. The New Towns proper were planned to disperse population following the Second World War under the powers of the New Towns Act 1946 and later acts. They were not in fact new, but developed around historic cores. Later developments included the Expanded Towns.

Designated new towns were removed from local-authority control and placed under the supervision of a Development Corporation. The Corporations were later disbanded and their assets split between local authorities and, in England, the Commission for New Towns (now English Partnerships).

The first wave was intended to help alleviate the housing shortages following World War II, beyond the green belt around London. A couple of sites in County Durham were also designated. These designations were made under the New Towns Act 1946.

The town of Telford (formerly Dawley New Town) was created from a number of smaller towns which were joined together around a central service area.

The second wave (1961–64) was likewise initiated to help assuage housing shortfalls. Two of the locations below (Redditch and Dawley New Town—later renamed Telford) are situated near the West Midlands conurbation; another two (Runcorn and Skelmersdale) are situated near Merseyside.

Cramlington and Killingworth were constructed from the 1960s by local authorities but were not designated new towns.

The third and last wave of new towns (1967–70) allowed for additional growth chiefly further north from the previous London new towns, with a few developments between Liverpool and Manchester. Dawley New Town was re-designated as Telford New Town, with a much larger area.

On 13 May 2007, Gordon Brown, who was shortly to become Prime Minister of the United Kingdom, announced that he would designate ten new "eco-towns" to ease demand for low-cost housing. The towns, of approximately 20,000 population each—at least 5,000 homes—are planned to be "carbon-neutral" and will use locally generated sustainable-energy sources. Only one site was identified in the announcement: the former Oakington Barracks in Cambridgeshire. Local councils will be invited to provide sites for the remaining four towns.[22]

The Town and Country Planning Association (TCPA) is advising the Government on the criteria and best practice in developing the eco-towns by producing a series of "worksheets" for developers.

The New Towns Act (Northern Ireland) 1965 gave the Minister of Development of the Government of Northern Ireland the power to designate an area as a New Town, and to appoint a Development Commission. An order could be made to transfer municipal functions of all or part of any existing local authorities to the commission, which took the additional title of urban district council, although unelected. This was done in the case of Craigavon.

The New Towns Amendment Act (Northern Ireland) 1968 was passed to enable the establishment of the Londonderry Development Commission to replace the County Borough and rural district of Londonderry, and implement the Londonderry Area Plan. On April 3, 1969 the development commission took over the municipal functions of the two councils, the area becoming Londonderry Urban District.