Jordans is a village located in Chalfont St Giles parish in Buckinghamshire, England.

Jordans is a notable centre for Quakerism. The village is the burial place of William Penn, founder of the Province of Pennsylvania, making it a popular tourist attraction with Americans. Jordans is also the location of the Mayflower Barn, made from the timbers of a ship, which some sources have claimed came from The Mayflower.

The village has about 200 households and 700 residents, with a nursery, primary school and community shop.

In the 17th century the village became a centre for Quakerism. One of the oldest Friends meeting houses in the country is in the village. The cemetery of the house is the burial place of William Penn, founder of the Province of Pennsylvania, as well as other notable Quakers. Close by the Quaker Meeting House is Old Jordans, originally a farm house, sold by the Quakers to Rivercrest Investments for development in March 2006.

Jordans Friends Meeting House was built in 1688 shortly after the Declaration of Indulgence. The meeting room retains most of its original brick, including the bare brick floor, glass, panelling and benches.

The Meeting House suffered a serious fire on 10 March 2005. The modern extension was virtually destroyed and the roof of the original 17th century meeting room was severely damaged. The interior of the original meeting room escaped relatively unscathed, although it did suffer some water and smoke damage. 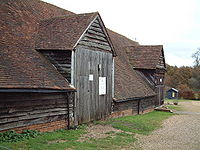 Within the grounds of Old Jordan is the Mayflower Barn on the edge of the Chiltern hills in the South Buckinghamshire countryside, about midway between London and Oxford, in the small village (and associated farmstead) of Jordans.

The farm's name seems to date back into the late Middle Ages. Its known history begins in 1618 when Thomas Russell bought it. Part of the present farmhouse was already there and Thomas Russell added to it in 1624, when he also built a substantial new main barn with timbers from a ship. In the 1920s antiquarian J. Rendel Harris concluded that the barn had been built with timbers from a ship called the "Mayflower" bought from a shipbreaker's yard in Rotherhithe and that this was the Mayflower which carried the Pilgrim Fathers from Plymouth to New England. However, Harris' research was speculative and drawn mostly from his claims of an oral tradition. Moreover, given there may have been up to 37 Mayflowers plying the oceans at the time and the farm's name is older than the ship, the timbers' origin has not been verified.[1][2]

The well preserved structure is a tourist attraction, receiving visitors each year from all over the world and particularly from the Americas. 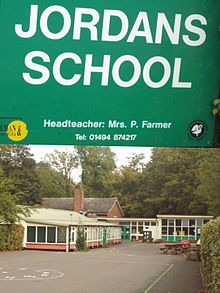 Located in Puers Lane, Jordans Village School is a state funded school, catering for years 1,2 and Reception (Ages 5–8). It is a feeder school for Seer Green School, Thorpe House School and Gayhurst School. The school educates about 60 pupils in total, with a student:teacher ratio of 1:12. The schools inspector OFSTED has commented "The school enjoys an ordered, welcoming and caring environment in which pupils are valued and respected and positive values and attitudes promoted."

Jordans is served by the nearby Seer Green and Jordans railway station, operated by Chiltern Railways, on the London to Birmingham main line. 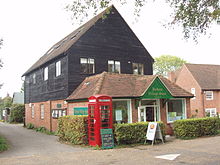 Jordans retains a strong community atmosphere, despite not having a local pub. Every year, a number of events take place in the village, an annual fete, a sports day and a village supper. The Jordans Tennis Club is a small tennis club located within the village. It has one full size court and one hut. It holds about 7 roll-ups each year. The village also has a youth club.

Jordans Village Store was opened in 1922. In addition to the usual staples, the shop also has its own brand of preserves. The shop also has a visiting Post Office. The shop is partly funded by a voluntary Shop Amenity Charge, £5 or £10 per month, which is paid by roughly half the households in the Village.

Five views of the allotments

Jordans has approximately 6 allotments which are well used. In recent times, there has been a proposal for utilising the land for a small development of accommodation for the elderly. This is causing a dispute. Some argue that there is a need for more accommodation for old people while others argue that the houses are too large to be suitable for the elderly, and will not be used for their intended purpose. The village shareholders voted in favour of building at an EGM in early March, the votes being in about 100 in favour and 70 against.

Jordans is home to: