Administrative geography of the United Kingdom

Administrative geography of the United Kingdom 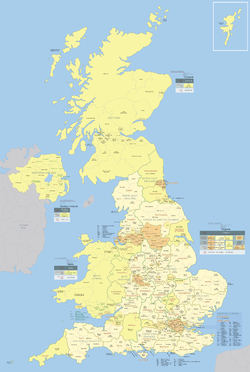 Administrative units of the United Kingdom 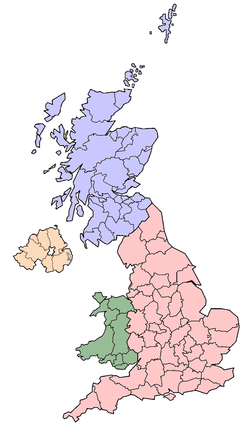 Because there is no written document that comprehensively encompasses the British constitution, and owing to a convoluted history of the formation of the United Kingdom, a variety of terms is used to refer to its constituent parts, which are sometimes called the four countries of the United Kingdom.[2] The four are sometimes collectively referred to as the Home Nations, particularly in sporting contexts. Although the four countries are important for legal and governmental purposes, they are not comparable to administrative subdivisions of most other countries.

Historically, the subnational divisions of the UK have been the county[3] and the ecclesiastical parish, whilst following the emergence of a unified parliament of the United Kingdom, the ward and constituency have been pan-UK political subdivisions. More contemporary divisions include Lieutenancy areas and the statistical territories defined with the modern NUTS:UK and ISO 3166-2:GB systems.

Main article: History of the formation of the United Kingdom

Euler diagram of the British Isles

Wales was incorporated into the English legal system through the Laws in Wales Acts 1535-1542, the earlier Statute of Rhuddlan having restricted but not abolished Welsh Law following the Edwardian conquest in 1282. As a result England and Wales are treated as a single entity for some purposes, principally that they share a legal system (see English law), while Scotland and Northern Ireland each have a separate legal system (see Scots Law and Northern Ireland law).

England has no devolved national legislature or government.

The highest level subdivisions of England are the nine regions. The London region, known as Greater London, is further divided into the City of London and 32 London boroughs. This is administered by the Greater London Authority, including the directly-elected London Assembly. The other regions are made up of metropolitan and non-metropolitan counties and unitary authorities. The counties are further divided into districts (which can be called cities, boroughs, royal boroughs, metropolitan boroughs or districts). The unitary authorities effectively combine the functions of counties and districts.

Below the district level, civil parishes exist, though not uniformly. Parish or town councils exist for villages and small towns; they only rarely exist for communities within urban areas. They are prevented from existing within Greater London.

Commonly, though not administratively, England's geography is divided into ceremonial counties, which in most areas closely mirror the traditional counties. Each ceremonial county has a Lord Lieutenant, who is the monarch's representative.

For local government, Northern Ireland is divided into 26 districts, which are unitary authorities.

Northern Ireland is divided into six traditional counties. Though widely used, these no longer serve any administrative purpose.

Below the national level, Scotland has 32 council areas (unitary authorities). Below this uniform level of subdivision, there are varying levels of area committees in the larger rural council areas, and many small community councils throughout the country, although these are not universal. Scottish community councils have few if any powers beyond being a forum for raising issues of concern.

Wales has an elected, devolved assembly, the National Assembly for Wales, along with the Welsh Government.

Below the national level, Wales consists of 22 unitary authorities: 10 county boroughs, 9 Counties, and 3 Cities. Below these are community councils, which have powers similar to English parish councils.

Wales is also divided into preserved counties, which are used for ceremonial purposes. Although based on the counties used for local government between 1974 and 1996, they no longer have an administrative function.

There are also many informal, historical and special purpose regional designations. Some such as the Highlands of Scotland have or have had, to some extent, formal boundaries. Others such as the London commuter belt are more diffuse. Some such as Snowdonia (Eryri) have a formal boundary in some contexts; in this case as a National Park. Others such as The Fens of eastern England are quite distinctly defined by geography but do not form any official entity.

Both Eurostat and the International Organization for Standardization have developed subdivision codes for the UK. See NUTS:UK and ISO 3166-2:GB.

The United Kingdom has 17 dependent territories, comprising the three crown dependencies within the British Isles, and 14 British overseas territories scattered around the world. Unlike some former colonial powers, the British Government does not classify its overseas possessions (or the crown dependencies, which share historical ties with the British Crown) as subdivisions of the United Kingdom itself; rather, each is treated in law as a separate jurisdiction. Most have their own legislatures and a degree of autonomy usually exceeding that of the devolved UK nations, including fiscal independence.

However, the UK retains varying degrees of responsibility in all of the territories, currently ranging from full political control to a largely ceremonial presence. The main reserved matters are the areas of diplomacy, international treaties, defence and security. The UK also retains in all territories a residual responsibility for 'good governance', a loosely-defined constitutional concept recently exemplified by its imposition of direct rule following alleged serious corruption in the Turks and Caicos Islands. The UK parliament at Westminster, and the British Government through the Privy Council, both retain the power to legislate for the dependencies - though by convention will usually only do so with each local government's consent.